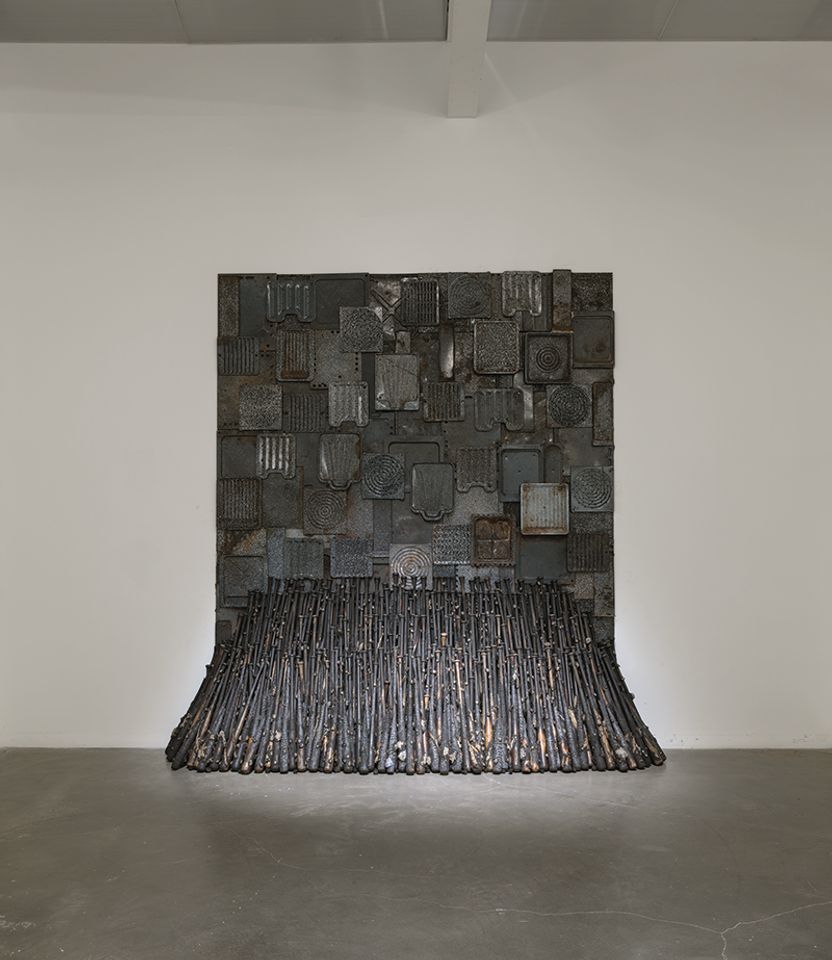 The New Museum gave the Jamaica-born, New York-based artist Nari Ward his first institutional solo show in 1992. It has now staged his first New York retrospective, We the People (until 26 May), a triumphant return across three floors that includes sculptures, large-scale installations, paintings and video, some of which were in that début. Ward’s work is as timely as ever, exploring themes like gentrification, democracy, historical memory and racism. His large-scale installations, which deftly use found and discarded materials like old baby prams and plastic bags, are particularly powerful. Iron Heavens (1995), a towering installation of metal pans and charred baseball bats, gives a heavy feeling of historical violence, but also a budding possibility for healing. You can even buy your own work by Ward: a replica of a plaque depicting Dr. Martin Luther King Jr, from a school near the artist’s Harlem studio—but purchase it for love, not investment. Every buyer must sign an agreement that any resale profits will be donated to the nearby Bowery Mission.

Exhibitionism: 50 Years of the Museum at FIT (until 20 April) is celebration of this anniversary of the fashion museum, founded in 1969 as The Design Laboratory and Galleries at FIT. As a look back to multiple exhibitions, it naturally does not have the clever cohesiveness of most the shows at the Museum at FIT, like the recent Pink: The History of a Punk, Pretty, Powerful Colour, but it is a chance to revisit the luscious garments and themes of its best shows. Outfits from the award-winning 2014 exhibition A Queer History of Fashion: from the Closet to the Catwalk, the first ever show to look at the contributions of LGBTQ culture to fashion, include a 1991 Versace suit repeatedly printed with Andy Warhol’s Marilyn. Among other shows examined are Fairy Tale Fashion (2016) and Fashion and Surrealism. It is often fun to spot who wore these gorgeous clothes, like a stunning 1936 evening dress made for Greta Garbo in the film Camille, by the US costume designer Adrian.

Nordic Impressions: Contemporary Art from Åland, Denmark, Finland, Greenland, Iceland, Norway and Sweden, which opens this Saturday (23 February; until 8 June) at Scandinavia House, is a comprehensive show of 24 works, many large-format, by contemporary artists who hail from Scandinavia. The pieces range from a colourful, semi-abstract felt pen on paper piece by the Danish artist Aase Seidler, who died last year at 91 (2013-16); to a 1995 video work by the Icelandic artist Ragnar Kjartansson, Ég og móðir mín (Me and My Mother); to a large-scale work in rainbow-hued artificial hair by Hrafnhildur Arnardóttir (aka, Shoplifter), the Brooklyn-based Icelandic artist who will represent her home country in the 2019 Venice Biennale. They are linked by themes important to Nordic culture, like such as nature and folklore, women’s rights and light and darkness. The most stunning piece is Skymning (At Dusk) (2017-18), a dreamy, atmospheric painted and embroidered textile work by the Sámi artist Britta Marakatt-Labba, who often uses motifs from Sámi history and mythology.