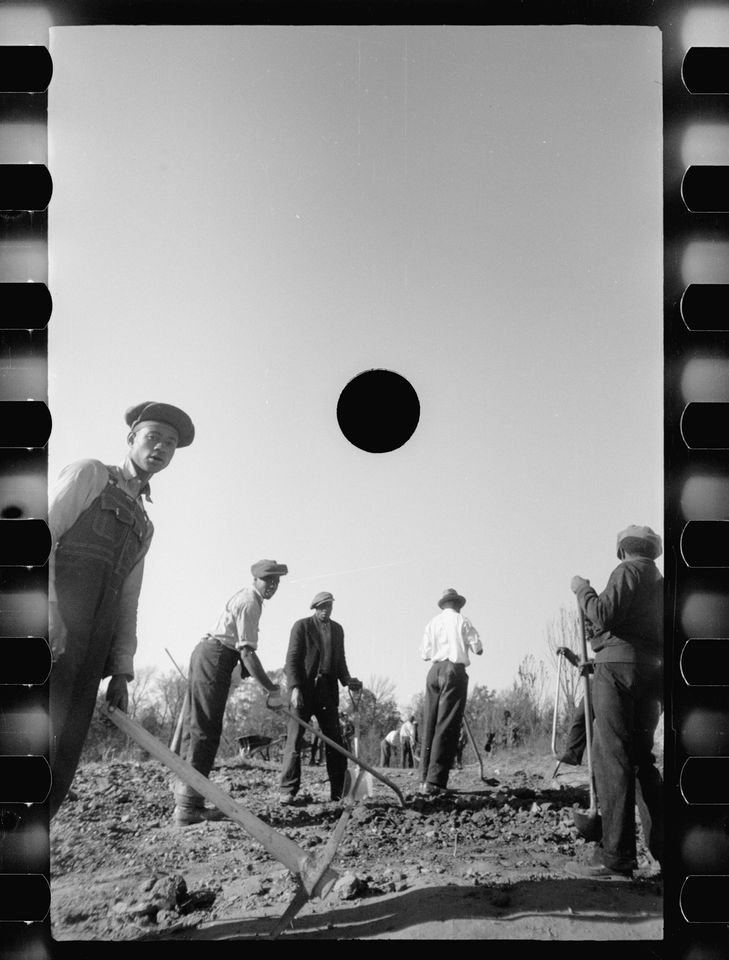 With Photo London opening this week at Somerset House, there are several shows around the capital to keep photography buffs happy: from the three-day festival Peckham 24 to the final weekend of the early photography show Victorian Giants. But for something a little different, and free, head to the Whitechapel Gallery for Killed Negatives: Unseen Images of 1930s America (26 August), which opened on Wednesday. The exhibition of around 70 prints by photographers such as Dorothea Lange and Walker Evans taken in 1930s rural America, borrows its title from the practice of destroying negatives by puncturing them with a hole so that they cannot be used—essentially killing them. These photographs, rejected at the time by the Information Division of the Farm Security Administration, who commissioned them, have been all been reprinted with the surreal black discs caused by the holes. Some hover in the sky, like an impossibly black sun, others obscure faces or puncture the sides of animals.

The biggest opening this weekend is not exactly an exhibition but the unveiling of a revamped Royal Academy of Arts (from 19 May), to coincide with its 250th anniversary. As well as new gallery spaces and a bridge linking its two premises, the institution’s prized possession, the Taddei Tondo by Michelangelo, finally gets the space to be fully appreciated. It was formerly tucked away on the second floor in the Sackler wing—on public display with little fanfare. It now joins the academy’s eclectic holdings in the new Collection Gallery in Burlington Gardens. The work, which was given to the academy in 1830, is the only marble sculpture by Michelangelo in the country and has a chequered history (see The UK's only marble Michelangelo takes pride of place at new Royal Academy). Also opening this weekend, in the institution’s new spaces for contemporary art, is Landscape (19 May-12 August), the third part of Tacita Dean’s London trilogy of shows.

Efforts to recognise and preserve Post-Modern architecture, which was once harshly dismissed by critics as superficial and positively wicked, were given a much-needed shot in the arm as Historic England granted heritage status to 17 Post-Modern buildings across the UK this month. Defined by bold use of colour, exaggeration of conventional proportions and the idea that more is better, “PoMo” sought to inject personality, ornament and historical references into architecture after a period characterised by anonymity, abstraction and clean lines. Between the mid-1970s and late 1990s, firms such as CZWG designed buildings that showed an interest in theatricality, pop imagery—and curves. So did pioneers such as James Stirling and Terry Farrell, the man behind the imposing Secret Intelligence Services headquarters overlooking in Vauxhall (for more on the subject, see our forthcoming June issue). The Return of the Past: Postmodernism in British Architecture (until 27 August) at the Sir John Soane’s Museum is one of the first in the UK to explore the topic in detail and, as well as drawings and models, will include full-scale replicas and fragments of Post-Modern buildings.