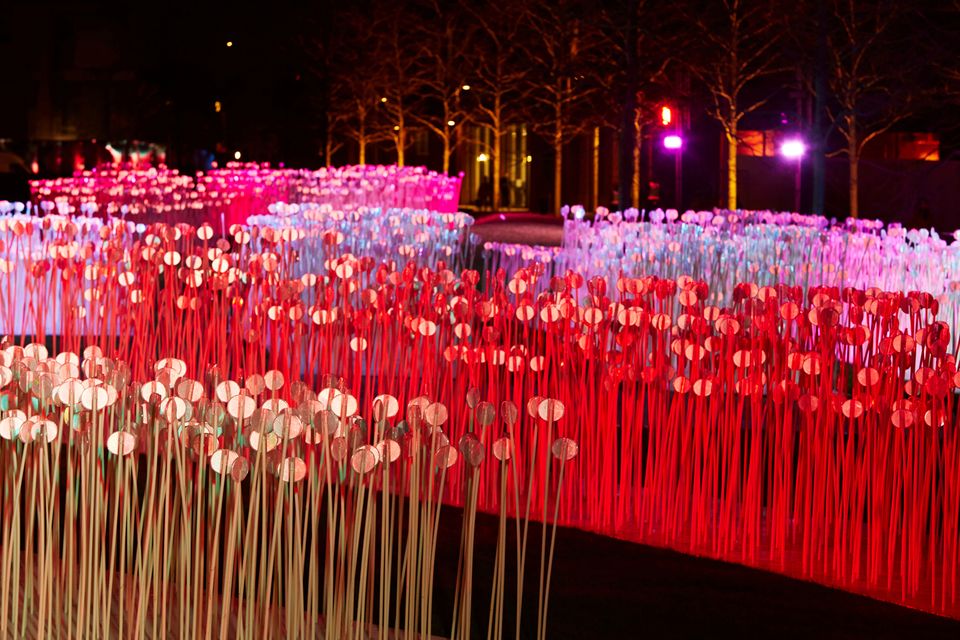 Entre Les Rangs by Rami Bebawi in Kings Cross for the Lumiere London festival Produced by Artichoke and commissioned by the Mayor of London; © MatthewAndrews

Do not miss Rachel Whiteread’s retrospective at Tate Britain (until 21 January), which closes this weekend. The British artist has filled the museum’s 1979 extension—especially opened up into a vast, single space—with 30 years of work. These range from early works made for her first show shortly after she graduated in the late 1980s, to pieces fresh from the studio, such as a Chicken Shed (2017), which has been installed outside the museum. For Closet (1988), Whiteread cast the interior of a wardrobe in plaster and covered it in black felt and ever since has been “mummifying the air”, as she once put it. The point of the Tate exhibition, according to its curator, Ann Gallagher, is to show that “through consistency of process, there’s an incredible variation”. Another recent Whiteread sculpture been unveiled in nearby Nine Elms, at the new US Embassy.

The Lumiere London festival (until 21 January) began yesterday with more than 50 works by UK and international artists creating an immersive light and sound experience across the city. Among the pieces on show are Tracey Emin‘s neon Be Faithful to Your Dreams, in Piccadilly; Patrice Warrener’s The Light of the Spirit Chapter 2 is projected onto Westminster Abbey; Entre Les Rangs by Rami Bebawi is in Kings Cross; and in St James’s, Alaa Minawi pays tribute to Syrian refugees with My Light is Your Light. “Lumiere London promises to be one of the brightest and most exciting times of the year. I look forward to welcoming millions of visitors to the capital to enjoy this city-wide spectacle,” says the Mayor of London, Sadiq Khan. The last London edition was attended by 1.3 million people. For more images of the festival, see In pictures: light festival Lumiere brightens up London.

On Saturday Matt’s Gallery will open the doors to its new temporary space in Bermondsey, south London, after relocating from Mile End. David Austen: the Drowned (20 January–18 February) will fill the gallery’s especially-made, cubic space—in a former shop—measuring 3m in height, depth and width. The British artist David Austen will be exhibiting a series of watercolours based on lost drawings that he calls “naked ghosts”, along with a new “floating” sculpture. The show is the first in a series of short exhibitions and events at the new location, and will be followed by an exhibition of paintings by Elizabeth Magill (23 February-4 March), after which the gallery will organise an on-going series of ten-day shows.