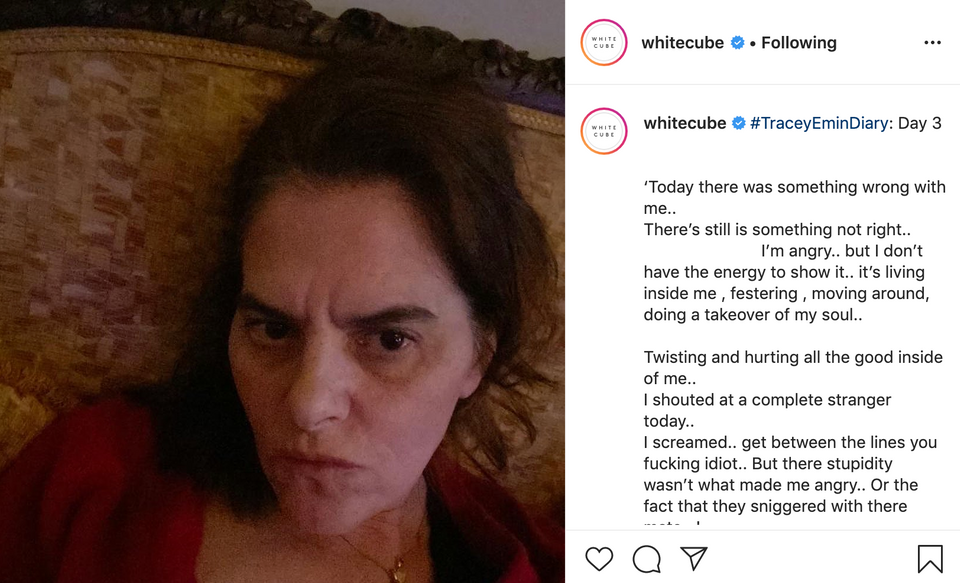 The British artist Tracey Emin has been sharing a daily diary of life during lockdown, posting personal images and videos together with fragments of writings on White Cube’s Instagram account.

Emin has long made art out of the raw materials of her life and so when the London gallery asked her to contribute, she gladly accepted. “A diary suits me, the way I work and think. I write daily but not a diary,” Emin tells The Art Newspaper. “We need art, all kinds of art. We need to encourage museums and galleries to do as many diverse projects and interventions as possible. This could be an opportunity to learn more about artists and their practice.”

The first of her seven instalments was posted on 26 March—a video of Emin in the bath with a tray of hot-cross buns and a cafetière of coffee in front of her. Beyond that, a brilliant blue sky is visible through the window.

Emin writes: “Today I would be happy… today I would celebrate my solitude… if I were not filled with an over powering sense of fear… A darkness… that has made me want to live more than ever.” She continues: “Now I want to live and fuck and love and scream… I’m going straight towards the sun… I’m going to feel warmth and safety and kindness and all that I ever dreamt I could feel.”

Over the next two days, Emin records her changing mood. On 27 March, she posted a photograph of her view at dawn, of an up-lit Spitalfields Church in East London, with the caption: “Today there were no birds singing… and I feel nothing… a numbness that sweeps over my body, a giant culling machine… feeling dead from the inside.”

The following day, on 28 March, a scowling Emin shared a selfie with the words: “Today there was something wrong with me… There’s still is something not right… I’m angry… but I don’t have the energy to show it… it’s living inside me, festering, moving around, doing a takeover of my soul.”

For her latest post, Emin uploaded a video of a painting she has been working on for nearly six months. “It’s never finished,” she says. “I’ve painted over it five times… and it’s had six different paintings on it […] I will not compromise, not on who I am or what I do.”

Ever forthright, Emin tells The Art Newspaper that the events of the past few weeks have left her scared. “I spend a lot of time alone. I’ve lived alone for 18 years, so I’m used to solitude,” she says. “But these times are scary… dark… and they are going to get really bad. I already know people who are very ill, and hear of many who are in intense care and it’s only just the beginning.”

Having closed her studio two weeks ago, Emin says she has barely left her home in three weeks. “People are working from home. I’ve been making drawings of my house,” she says.

One of the things that has alarmed her most is the people who are underestimating Covid-19. “It’s a killer and no one has any idea which direction it’s coming from,” she says. Emin recounts calling an ambulance for a neighbour with suspected appendicitis last week. “It took an hour and a half for the ambulance to come. They told me that was fast. The call operator told me she was doing a 14 hour shift, they couldn’t keep up with the calls,” she says.

To date, three of the artist’s institutional shows have been postponed. I Lay Here For You, which was due to open at Jupiter Artland to coincide with the Edinburgh Festival (30 July-30 August), has been moved back to May 2021, while an exhibition due to open this year at Villa Théo in Saint-Clair in the south of France has been postponed to July 2021.

An exhibition pairing Emin with Edvard Munch, slated to open at Oslo’s new Munch Museum this spring but already delayed till the autumn due to building works, will now open in March 2021. The show was due to travel to the Royal Academy of Arts in London this November, which Emin hopes will still go ahead on the original date.