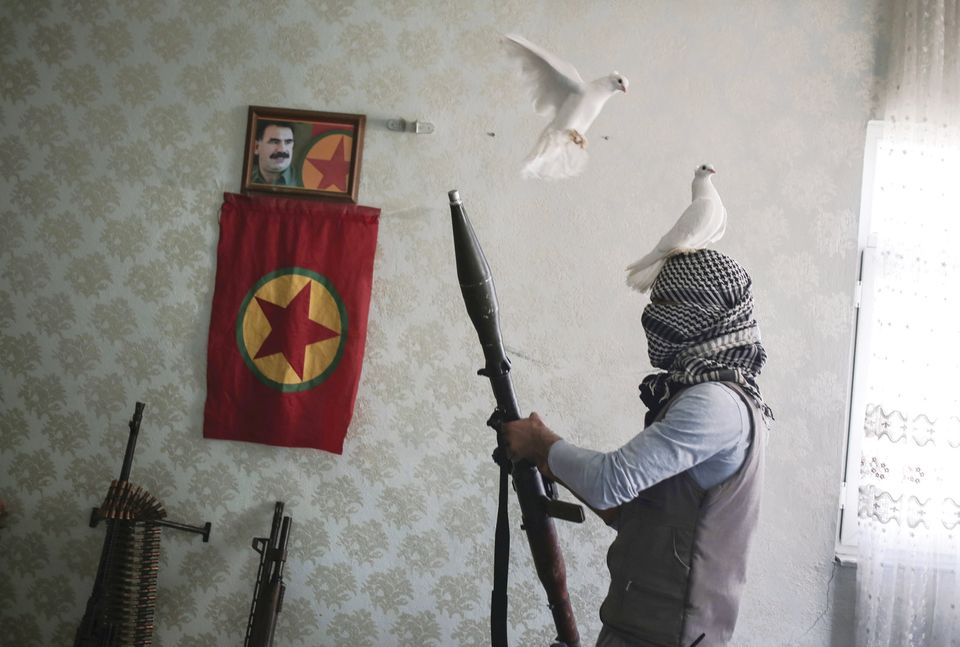 Cagdas Erdogan is due to stand before a judge in Caglayan, Turkey’s highest court on 26 March. The 27-year-old photographer is accused by the Turkish government of terrorism. If the prosecution gets its way, Erdogan will not be granted his freedom until close to his 50th birthday.

On a video call from his home in Istanbul, Erdogan said: “I am trying to be rather cold-blooded about the trial. But I’m tense. It’s difficult to concentrate on anything else.”

Erdogan grew up in the Kurdish borderlands between Turkey and Syria. He was born in the village of Findikli in the province of Mus. When he was three years old, Findikli was forcibly evacuated and Erdogan’s family moved to Bursa in the north of the country.

As a self-taught photographer, he returned to the region to photograph the ongoing and multifaceted conflict between the Kurdistan Workers’ Party (PKK), an internationally recognised terrorist organisation, numerous jihadist groups in neighbouring Syria, and the Turkish military. “I have witnessed many violations of the law in my home region,” he says. “Several family members and loved ones have suffered injustice.”

At times during the shooting of the series, which he called Cold Summer, he embedded himself with militants aligned with the Patriotic Revolutionary Youth Movement, an offshoot of the PKK.

Photojournalists like Cagdas have to operate without backup or insurance

Now he is accused by the Turkish government of “creating continuous propaganda” for and “being a member of” and “working as an administrator for” the PKK. Erdogan’s imagery of the conflict has been published by media organisations including the Guardian, the New York Times, the Telegraph, Associated Press and Getty. According to Turkish government prosecutors, the publication of this imagery amounts to propaganda for the separatist group. They’re seeking a prison sentence of more than 22 years.

But Erdogan’s crimes, he says, extend no further than trying to tell the truth. “If the legal process were lawful and rational, I would be acquitted on the first day,” he says. “I’m in a Kafkaesque loop. The whole process is irrational.”

An early image from Cold Summer was distributed by Getty on 26 February 2016, before being picked up by the Guardian. Shot in Nusaybin, a town that straddles both Turkey and Syria, the image shows a Kurdish militant in a domestic living room. His head is wrapped in a kufiya and he holds a rocket-propelled grenade. White doves fly above his head. “I see the image as a symbol of peace, and as a sign of the futility of war,” Erdogan says. “But a pro-government media outlet targeted me in a prime-time news show and accused me of terrorism. That incident provoked the whole judicial process.”

Erol Onderoglu, the Turkish representative for Reporters Without Borders, is also facing a potential 14-year prison sentence for apparent support of terrorism in the Kurdish territories. He tells The Art Newspaper: “The case of Cagdas Erdogan perfectly reflects the ongoing judicial abuses against photojournalists in Turkey. Turkish correspondents are routinely accused of terrorism as a result of new and entirely disproportionate anti-terror legislation. The publication of any pictures of PKK fighters—particularly when they’re defined as militants, rather than explicitly as terrorists—means the photographers themselves are accused of direct affiliation.”

Robert Mahoney, the deputy executive director of the Committee to Protect Journalists, says: “Erdogan is being punished for being a journalist whose work the authorities don’t want published.”

The British photographer George Georgiou lived in Istanbul from 1999 to 2009 and has acted as a mentor to Erdogan. “We’ve seen a significant crackdown of dissent,” Georgiou says. “And ever since the 2016 coup [a failed attempt to grab power by a section of the Turkish military], it has just got worse. It’s now very hard to affect the government, even with protest.”

Georgiou is optimistic that Erdogan will not receive a punitive prison sentence. “But I think they have said to him: ‘Be careful, we’re watching you.’ It’s a very potent form of control.”

Georgiou has been aware of the Cold Summer series for some time. “I saw the work when he was just starting out,” he says. “At that time, he was just a young photojournalist. The Kurdish territories are his homeland. He felt he had a duty to record what was happening. He was driven and brave, but foolish too, which is what you need to be to go to places like that.”

Yet despite this personal connection, Erdogan’s actions as a photographer were “standard photojournalistic practice,” Georgiou says.

“Wherever you are in the world, a good photojournalist is looking to embed themselves with as many people as possible,” he says. “You’re looking for contacts to give you access. Photojournalists everywhere do it all the time. That’s how you’re taught, and that’s how you discover the realities of the story. Just because you’ve made contact with someone doesn’t mean you’re part of their organisation.”

Erdogan’s trial is instructive, Georgiou says—for it has wider implications. “Cagdas was reporting on a story the government doesn’t want out there,” he says. “And that story was published by some very big news organisations. It’s indicative of changing times: the modern news media uses local freelancers, but they don’t provide any actual support. It’s their way out of taking any responsibly afterwards.

“Photojournalists like Cagdas have to operate without backup or insurance, and they take a lot of risks,” Georgiou says. “The kind of coverage he was able to provide is going to be harder and harder to get in the future. Ultimately, we will end up knowing less about conflicts like this. And that’s a sad thing to comprehend.”