Twice the size and seven storeys high: the new San Francisco Museum of Modern Art is ready for lift-off

Few museum expansions in recent memory have been as anticipated as that of the San Francisco Museum of Modern Art (SFMoMA). The city's major Modern art museum is due to reopen on 14 May having doubled in size, tripled its gallery space and added 3,000 gifts to the collection, more than 600 of which are on show across 18 inaugural exhibitions. By many measures, the museum is now the largest space dedicated to Modern and contemporary art in the US.

The $305m extension, which has been designed by the Norwegian architects Snøhetta, towers over the institution's original Mario Botta-designed building. Together, the two offer a whopping 170,000 square feet of galleries—26% more than the Museum of Modern Art in New York.

The new facility includes the museum’s first dedicated gallery for works on paper, a new photography centre and a conservation studio. Gary Garrels, SFMoMA's senior curator of painting and sculpture, says he lost five pounds during the installation process from all the walking.

In a presentation to press yesterday, 28 April, Charles Schwab, the chairman of the museum’s board, said: “Today, people’s lives are about sharing, and we wanted a museum that would embrace that spirit.”

This spirit is evident in more ways than one. The inaugural installations are dominated by recent gifts and long-term loans. The new building also has its share of Instagram bait to encourage social media sharing. There is a “living wall” of native California plants designed by the local firm Habitat Horticulture; outdoor terraces with sweeping city views; and a new lobby gallery for large-scale installations that is free to the public. It opens with Richard Serra’s 213-ton steel sculpture Sequence, 2006. 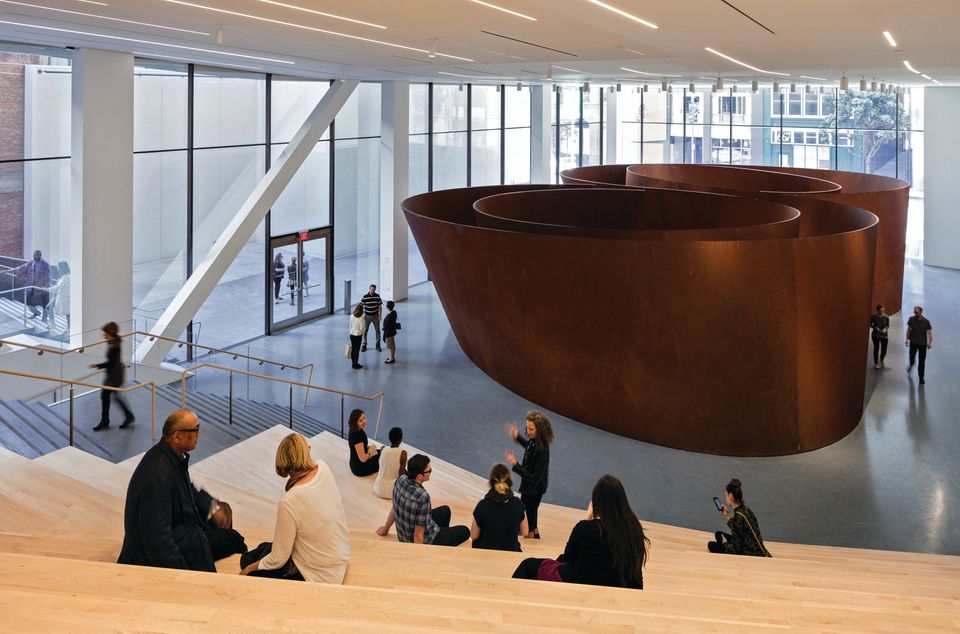 Snøhetta's seven-storey addition boasts a rippling façade whose aesthetic is part Christo, part Apple store. The architects say they were inspired by the gentle waves on the San Francisco Bay. Inside, however, they aimed to make the architecture serve the art and the museums' visitors.

Imperceptible touches encourage visitors to dwell in the museum. To prevent them from getting tired too easily, for example, the staircases between the lower floors are less steep than those on the higher floors. To foster quiet contemplation, the ceilings are lined with soundproof plaster and filled with crushed glass beads.

But the star of the new display—for better or for worse—is the collection. “When we opened [the Botta building] in 1995, the museum was quickly given over to exhibitions,” SFMoMA’s director Neal Benezra says. “We wanted to redress that balance and focus on the collections.” High-impact gifts on show at the museum for the first time include Ed Ruscha’s Smash (1963), purchased by Schwab at auction in 2014 for $30.4m, and a room full of late photographs by Diane Arbus.

The largest and most talked-about inaugural exhibition presents 260 highlights from the collection of Gap clothing store founders Donald and Doris Fisher. The blue-chip collection of more than 1,100 works of US and European (mostly German) art, on loan for 100 years, was a major factor in the museum’s decision to expand. For years, the works have been displayed behind closed doors at Gap’s headquarters in San Francisco, rarely seen by the public.

Under the agreement, the Fisher Collection must be shown together for the first year and then again once every ten years; in between, it can be integrated with the rest of the museum’s holdings. Benezra sees the arrangement as a “new model” that may inspire other museums and collectors. Bob Fisher, one of the couple’s sons and the president of the board, said it would be up to future generations to decide whether to make the loan permanent.

The Fisher display is organised monographically to show off the depth of the collection, which includes nearly 130 works by Sol LeWitt, 45 by Alexander Calder, 41 by Ellesworth Kelly and 24 by Gerhard Richter. (Doris Fisher used to speak with Kelly by phone every few weeks.) An octagonal room with seven paintings by Agnes Martin is fondly referred to as the “Martin chapel”. The Calder gallery was specially designed with low ceilings to recreate the feeling of seeing the work in a domestic space.

Gifts are the unifying factor behind the majority of the inaugural displays in the new building, including focused galleries on Bay Area conceptual art and new media pioneers including Nam June Paik and Lynn Hershman Leeson. This organising principle may frustrate visitors looking for a more coherent, compelling narrative or for new discoveries by overlooked artists, particularly women and artists of colour. Benezra acknowledges the museum still has “work to do” to further broaden its collection beyond marquee names.

Meanwhile, a few smaller exhibitions like the photography-focused About Time—which mixes older work and new gifts and spans early daguerreotypes to contemporary photographs by Zoe Leonard and Dawoud Bey—show what curators can do when their hands are not tied by commitments to donors.

For his part, Garrels is already looking ahead to mixed presentations of Fisher and non-Fisher work. He is planning a show of double portraits that will juxtapose David Hockney’s 1974 painting of the artists Shirley Goldfarb and Gregory Masurovsky from the Fisher Collection with works including Frida Kahlo’s famous 1931 portrait of her and Diego Rivera and Alice Neel’s portrait of the artists Geoffrey Hendricks and Brian Buczak (1978). “This is the fun part,” he says.

• For further analysis and an in-depth look at the new SFMoMA, see our June issue.