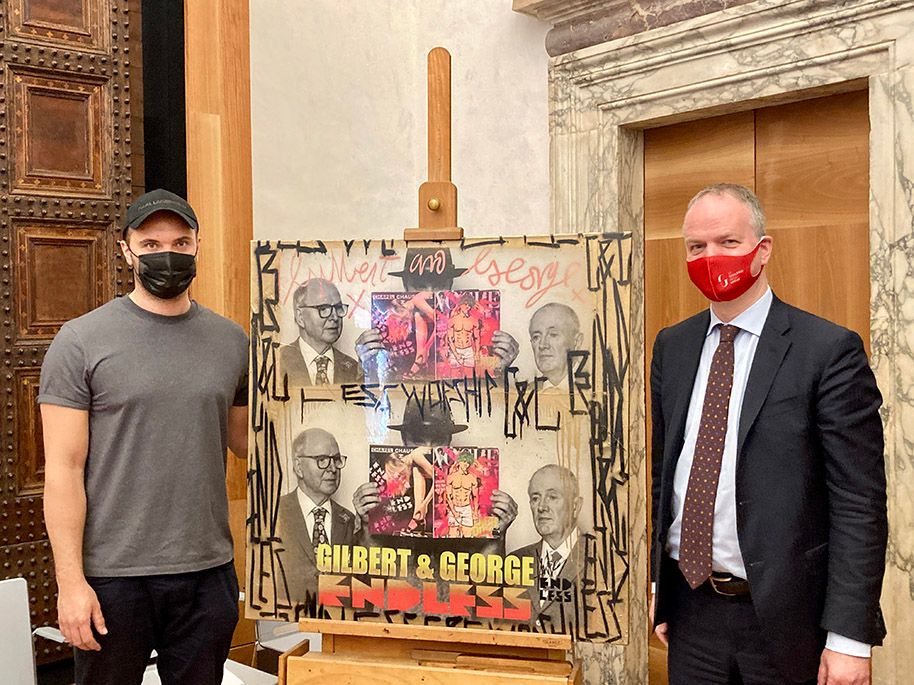 In a surprise move, the Uffizi Galleries in Florence—home to masterpieces by artists such as Michelangelo and Leonardo da Vinci—has acquired its first “street art” piece: a montage by the UK artist Endless incorporating the London-based artist duo Gilbert & George.

Eike Schmidt, gallery director, says that “the Medici [the Florentine rulers who built the Uffizi], always at the cutting edge, would be happy to see Endless’s work enter the collection.”

The mixed-media work, a contemporary piece, combines a photograph of Gilbert & George, taken by Noel Shelly, with an image of Endless reading a magazine emblazoned with Crotch Grab, the street artist’s take on the 1990s advertising campaign featuring Mark Wahlberg in Calvin Klein underwear. Endless’s signature is daubed around the borders.

Endless says in a statement: "It is an honour that my work has been added to the collection of the Uffizi Galleries. Artists who come from a street art background are rarely recognised by the most prestigious museums…. Street art, after all, is a [form of] art in itself and is historically significant.” The artist donated the piece to the Uffizi.

Cris Contini contemporary gallery in London, which sells the artist’s works, claims that Endless started out “using the walls of London as his canvas”. His other works include an image of the Queen with her tongue hanging out, set against a Union Jack backdrop (Lizzie Vuitton Union Jack, 2020).

In an interview with GQ magazine in 2019, Endless says “I do not have a specific favourite gallery, but I love the size and space of the White Cube gallery in London.” Asked what his last three Google searches were, he responded: “Where’s my closest Greggs? [a bakery chain].”

UPDATE (10 February): Endless says that the Uffizi "requested [the piece] through his gallery [Cris Contini]".