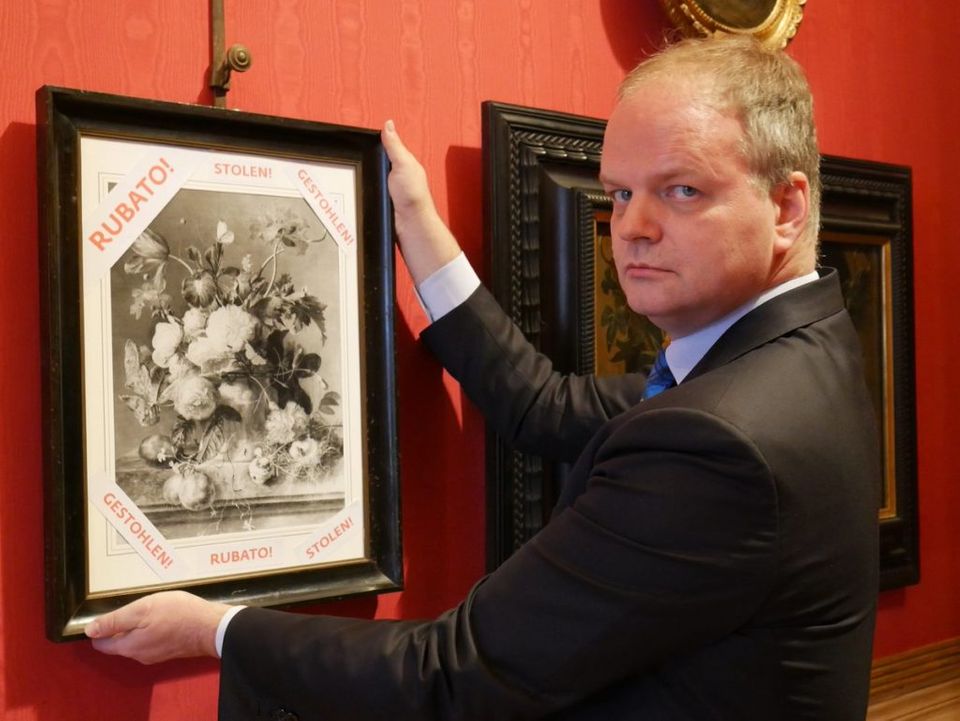 Germany is to return a small oil painting Vase of Flowers by the Dutch artist Jan van Huysum (1682-1749) to the Pitti Palace in Florence, around 75 years since it was seized by retreating Nazi troops in 1944 from the nearby village where it had been brought for safekeeping during the Second World War. Italy’s Ministry of Foreign Affairs and International Cooperation announced the news Saturday. This is “a great victory for the whole of Italy”, Eike Schmidt, the German director of the Gallerie degli Uffizi, which includes the Pitti Palace, told Reuters.

The return follows a dramatic gesture by Schmidt: on New Year’s Day this year, he hung a black-and-white scale print of the still life, with “Stolen!” in English, Italian and German laid over the picture, in the museum. “Germany has a moral duty to return this painting to our museum. This story is preventing the wounds inflicted by World War II and the horrors of Nazism from healing,” Schmidt told Reuters in January.

The painting, brought to Florence in 1842 and put on display by Leopoldo II of Lorraine, Grand Duke of Tuscany, had disappeared, and was rediscovered in the hands of a German family in 1991 after the country’s reunification. (It was reported that the family were descendants of the soldier who took the work, while the family’s lawyers said that the soldier bought the work at a market to send to his wife.) Legal attempts to get the painting back were prevented by a 30-year statute of limitations in Germany on alleged crimes. “Germany should not apply the statute of limitations to works of art stolen during the war,” Schmidt told Reuters in January.

At that time, negotiations between intermediaries for the family possessing the work and the museum were stalled because the family was reportedly demanding payment of up to €2m from the Uffizi, which the Uffizi refused. It is currently unknown whether the agreement to return the painting includes compensation for the family.

According to Italy’s Ministry of Foreign Affairs and International Cooperation, Germany’s foreign minister Heiko Maas and Italy’s foreign minister Enzo Moavero Milanesi will come to Florence for the official handing over of Vase of Flowers. “Thanks to the strong cooperation between Ministers Maas and Moavero, the still life, one of the Dutch master’s most important masterpieces, will be hung back in the place Leopoldo II of Lorraine, Grand Duke of Tuscany originally assigned to it nearly two centuries ago,” the ministry says.