Around 250 workers are fighting for better pay and benefits, as the museum gears up to open a $400m expansion 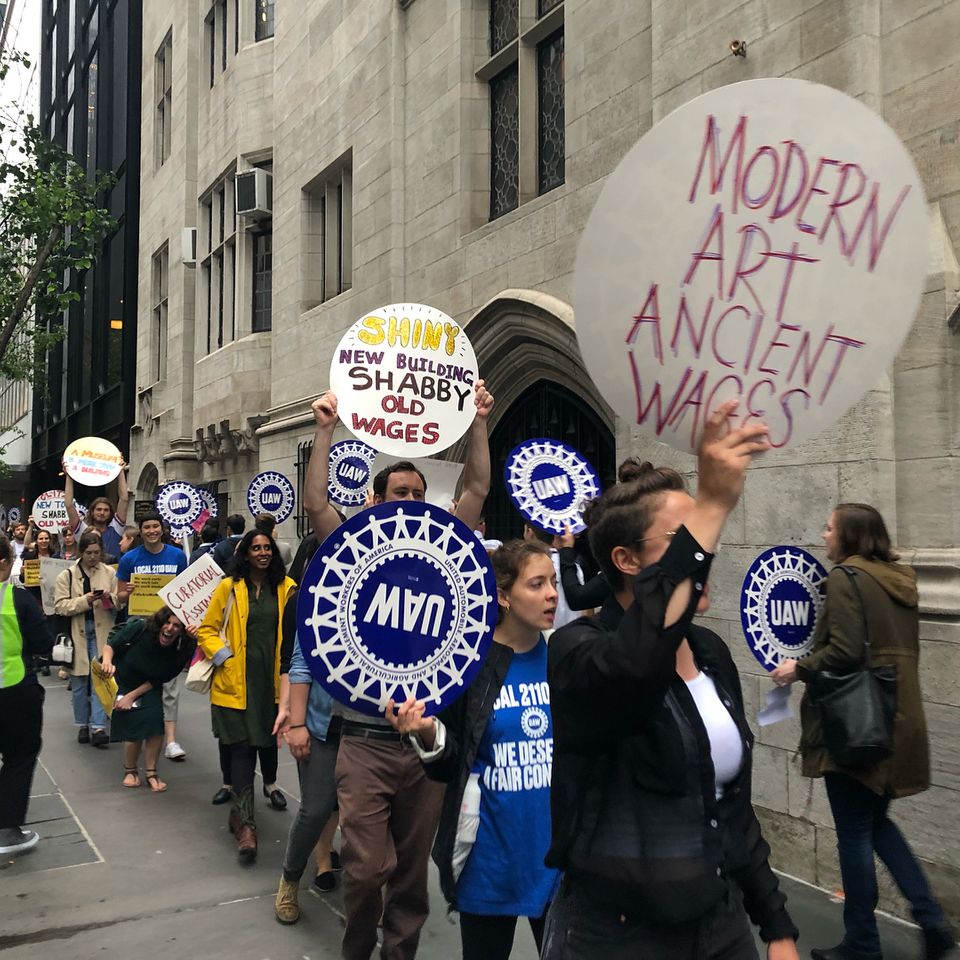 Last night, MoMa hosted its annual Party in the Garden gala fundraiser, attended by moneyed donors and board members, including the president emerita and honouree Agnes Gund, and ending with a concert by St Vincent. Meanwhile on the street outside, around 250 unionised museum workers and their allies gathered at a Party on the Pavement to protest what they say are “unjust” contract negotiations. Wearing bright blue t-shirts emblazoned with the words “We Deserve Fair Contracts”, the protesters carried hand-made signs that read: “Modern Art Ancient Wages” and “Glitzy New Tower Shabby Old Wages”, referring to the MoMA’s $400m expansion, currently under construction.

Maida Rosenstein, the president of the United Automobile, Aerospace, and Agricultural Implement Workers Local 2110 union, which represents around 250 staff members in MoMA’s curatorial and publications departments, library and store, says the museum is trying to “lowball them economically”, through low wages, threats to cut health care, and little-to-no overtime pay.

At the same time, the museum is raising around $400m for a major expansion in 2019 that will add 50,000 sq ft of exhibition space to its building. The building project has caused many museum staff to work extra hours, but fewer than 50% of those workers are eligible for overtime pay, Rosenstein says. “At this stage of the negotiations, we’re still far apart on these basic economic issues, particularly given what people are facing in this coming year with the reopening of the museum.”

Well, that was fun!!!!!!!! ???? Thanks everyone for coming out to our Party on the Pavement! We were 100+ strong and it could not have been a bigger success, thanks to your support and solidarity. My ears are still ringing from those chants—and that whistle! ? I think MoMA got the message that WE ARE SERIOUS and WE! WILL! BE! BACK! if we can’t settle our contract fairly!⚡️✊?⚡️#partyinthegarden #moma #museumofmodernart #partyonthepavement #momalocal2110 #WeAreMoMA

Rosenstein said the aim of the protest was to bring awareness to the attendees of the gala and the larger public of the museum’s treatment of its workers. But it was also meant to highlight the irony of honouring the philanthropist Agnes Gund, “know for her liberal political stances in funding art and social justice,” while “not taking a very just stance towards their own staff”, Rosenstein adds.

“MoMA’s extraordinary staff are the best in the world,” a museum spokeswoman said. “We are committed to working with the Local 2110 to reach an agreement that will keep our community of dedicated staff and the Museum on a path of financial stability and future growth. We respect the right of each individual to contribute to the open dialogue and make her or his voice heard in this process.”

Similar protests were held during contract negotiations three years ago, and a dispute in 2000 resulted in a 134-day strike of museum staff. “We’re certainly hoping it won’t come to that,” Rosenstein says. “We’re hoping that our message is getting out, and that the museum will understand that they need to make a better offer.”

The union is due to re-enter negotiations with the museum next week.