Introduced in March, the Counter Act is the latest legislation that faces dealers with financial regulatory burden 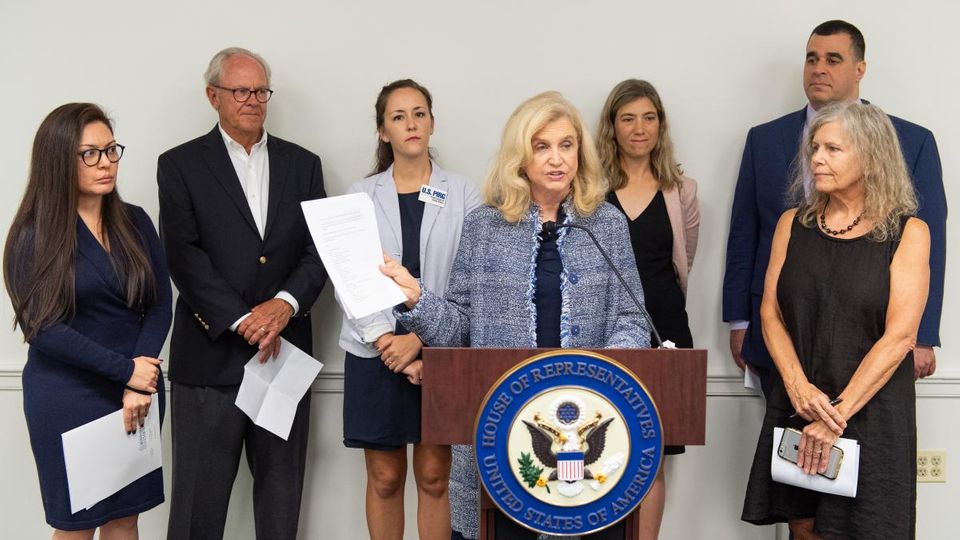 Representative Carolyn Maloney introduced a 2019 corporate transparency act, with which the Counter Act passed the US House of Representatives unanimously on Tuesday.

An anti-money laundering (AML) bill that could affect art and antiquities dealers passed in the US House of Representatives on Tuesday.

HR 2514, better known as the Coordinating Oversight, Upgrading and Innovating Technology, and Examiner Reform Act (Counter Act), was introduced in March. It is the latest piece of legislation to come before Congress that intends to crack down on shell companies, fight money laundering and prevent terrorist financing. Proposed by Missouri Congressman Emanuel Cleaver, the bill was quietly passed as a rider on another corporate transparency act, proposed by New York Congresswoman Carolyn Maloney, that had wide-spread support.

Prior to the Counter Act, the 2018 Illicit Art and Antiquities Trafficking Prevention Act, which stagnated on the House floor last year suggested that the Bank Secrecy Act (BSA) be applied to the art and antiquities market in order to quash money laundering; dealers would be required to report transactions exceeding $10,000.

According to the bill, the Secretary of the Treasury, along with Federal Bureau of Investigation, the Attorney General and Homeland Security Investigations, “shall perform a study on the facilitation of money laundering and terror finance through the trade of works of art or antiquities”. Any person “trading or acting as an intermediary in the trade of antiquities, including an advisor, consultant or any other person who engages as a business in the solicitation of the sale antiquities” could be subject to inquiry.

“There is no evidence that suggests that money laundering is an issue for the thousands of US small antiques, ethnographic and ancient art dealers, and the collectible coin businesses that could be severely impacted by this legislation,” says Kate Fitz Gibbon, a New Mexico-based lawyer specialising in cultural property and the executive director of the Committee for Cultural Policy.

Moreover, there is little to no numeric evidence connecting US art sales with the Islamic State or other terrorist activities. Congresswoman Maloney’s office declined to comment on the bill, while Congressman Cleaver’s office did not respond to a request for comment.

Especially after the European Parliament’s fifth Anti-Money-Laundering directive was passed in 2018, there has been mounting concern among US dealers that AML legislation will give the Financial Crimes Enforcement Network (FinCEN) authority to regulate the art and antiquities trade, leading to exorbitant administration costs on behalf of business owners in these fields. Antiquities are mentioned in section 213 of the Counter Act without being explicitly defined, and—since the traditional definition relates to all objects 100 years old or older—FinCEN may begin regulating dealers handling in anything dating earlier than 1919.

The Art Dealers Association of America (ADAA) noted precautionary information on the Counter Act and its potential implications in their September members meeting when it became clear the bill was moving quickly through the House. Yet according to Capitol Hill sources, the bill moved even passed even faster than anticipated.

The Counter Act will still need to pass the Senate before it would go into effect. Yet its success in the House is seen as a win by proponents who have long been seeking more financial regulation of the art and antiquities trade. “[This is] a much needed first step,” says Tess Davis, the executive director of the Antiquities Coalition, a private archaeological advocacy group with ties to Unesco, based in Washington, DC.

"Such increased transparency may seem a hurdle at first, but it is one that has already been faced successfully by dealers in precious metals, stones and jewels," Davis adds. "A number of responsible players in the art world have already recognised the [antiquities] market's vulnerability to financial crimes."

Fitz Gibbon says, however, that antiquities are the smallest financial sector of the art business, accounting for less than 1% of all sales. “It’s unfathomable why they would be targeted without any evidence of a problem.”