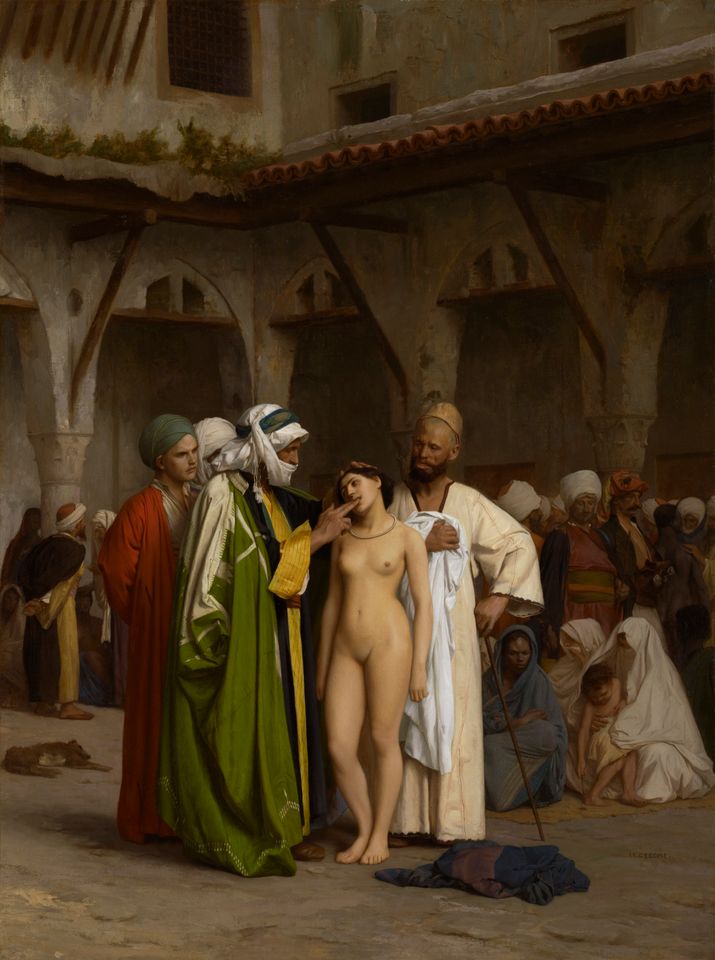 Jean-Léon Gérôme’s Slave Market (1866) is in the collection of the Clark Art Institute in Williamstown, Massachusetts

The Clark Art Institute in Williamstown, Massachusetts, the owner of a provocative painting by Jean-Léon Gérôme, has called on a German right-wing party to stop using the work to deliver an overtly xenophobic message in its campaign for the European elections in May.

Gérôme’s 1866 painting Slave Market depicts a pale-skinned naked woman surrounded by a group of men: a masked prospective buyer swathed in a turban probes her teeth with his finger. The Berlin branch of the Alternative für Deutschland party (AfD) has plastered a cropped version of the image on billboards across the city, exhorting voters to choose the party “so that Europe doesn’t become Eurabia”.

“We strongly condemn the use of the painting to advance AfD’s political stance and have written to them insisting that they cease and desist,” says Olivier Meslay, the director of the Clark Art Institute, in a statement. “We are strongly opposed to the use of this work to advance any political agenda.”

While Gérôme travelled extensively in Egypt and is considered a leading proponent of Orientalism, it is unlikely he ever visited a slave market, according to the Clark Art Institute’s analysis of the painting. “The naturalism of the scene is thus open to question on a number of levels,” it says.

The AfD's Berlin campaign also uses the word “Eurabia”, often used by right-wing conspiracy theorists to describe alleged Arab plans to dominate Europe. The German media have pointed out that the term was used by the Norwegian mass-killer Anders Behring Breivik, who was convicted of murder and terrorism in 2012.

The political poster is part of a series that the AfD says on its Facebook page “use several images from European art history to point to common values that it is more important than ever to defend today”.

But for Jürgen Zimmerer, a professor of African history at the University of Hamburg, the lesson from the poster is that confronting the colonial legacy is essential in combating modern-day racism. “The fantasy images created back then still linger in minds,” he wrote on Twitter.

Meslay says the Clark Art Institute did not supply a copy of the image to the Berlin branch of the AfD. “As the painting is in the public domain, however, there are no copyrights or permissions that allow us to exert control over how it is used other than to appeal to civility on the part of the AfD Berlin,” he says.