US students and activists take creative action against gun violence 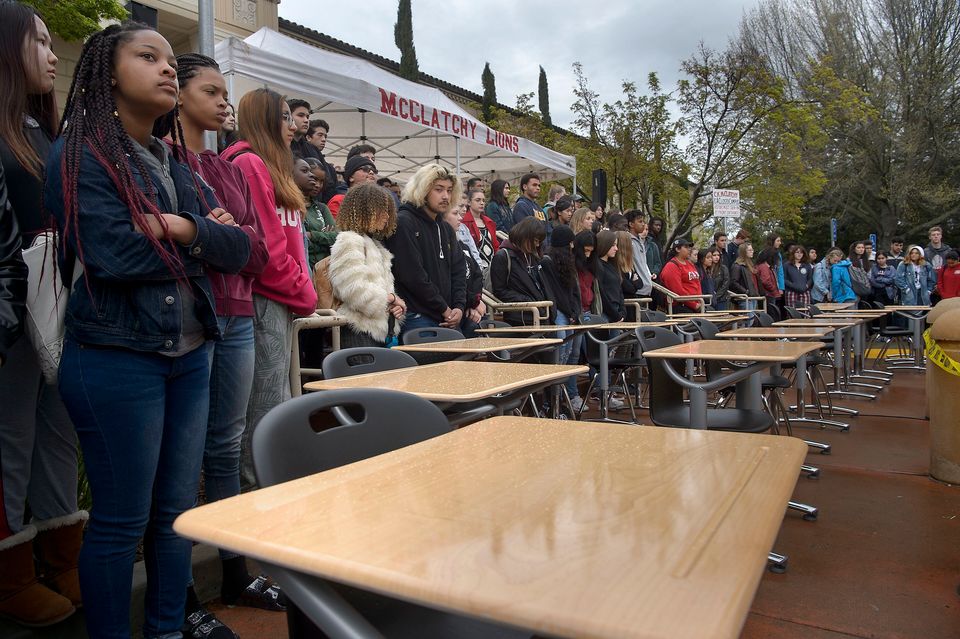 Today, a month after the shooting that left 14 students and three staff members dead at Marjory Stoneman Douglas High School in Parkland, Florida, thousands of young people walked out of classrooms across the US to demand stricter gun-control legislation. Most groups commemorated the dead by walking out for 17 minutes, but some took additional creative action: at Cooper City High School, just half an hour’s drive south of Stoneman, 14 desks and 3 podiums, all empty, were arrayed outdoors in a circle.

The makeshift memorial echoes a pop-up art exhibition that appeared in a Miami warehouse last weekend titled Parkland 17. Supported by the Miami Heat basketball player Dwyane Wade, and organised by his personal stylist, Calyann Barnett, and his manager, Lisa Joseph Metelus, the show featured 14 empty school desks and chairs, with a paper placecard listing the name of a student victim of the shooting on each one. At the front of the arrangement were two desks standing in for the teachers who were killed, as well as a small patch of grass with white lines painted on it, signifying the assistant football coach who was shot dead.

Alongside the somber classroom, the exhibition included a phone booth where visitors could call their Congressional representatives and a mural painted by artist Manuel Oliver in honor of his son Joaquin, who admired Wade and, after being killed at Stoneman, was buried in his basketball jersey. Visitors could write their own messages on the wall around a portrait of Joaquin and the big, blocky text accompanying it: “We Demand a Change”. Oliver told the New York Times the mural was his first creation as a “graphic activist”.

Although the exhibit was only supposed to remain on view last weekend, the organisers have now announced that it will reopen this coming one due to popular demand. “We might add to it,” Barnett told theTimes. “Some other family members might want to hang something.”

There are 7,000 pairs of shoes outside the Capitol today. Each pair represents a child killed by guns since Sandy Hook @Avaaz pic.twitter.com/ByEEiO3uOZ

As part of the continued mourning and momentum after Stoneman, the online activist network Avaaz also organised a memorial-cum-protest action against gun violence in Washington, DC this week. On 13 March, 7,000 pairs of shoes were spread out in rows all across the US Capitol lawn, each one standing in for a child killed by gun violence since the 2012 Sandy Hook shooting. (The figure isn’t exact but rather an estimate calculated by Avaaz based on figures from the Centers for Disease Control.) Avaaz previously placed thousands of pairs of shoes on Paris’s Place de la République in fall 2015, just before the UN climate change conference. In that instance, the shoes stood in for protesters who were barred by the government from gathering. In Washington, DC, the shoes presaged the arrival the next day of thousands of students, who marched from the White House to the Capitol to demand “gun control now!”

The #DC-area #walkouts are closing in on Congress, demanding action on #guncontrol “now!” pic.twitter.com/enOajQsfYL