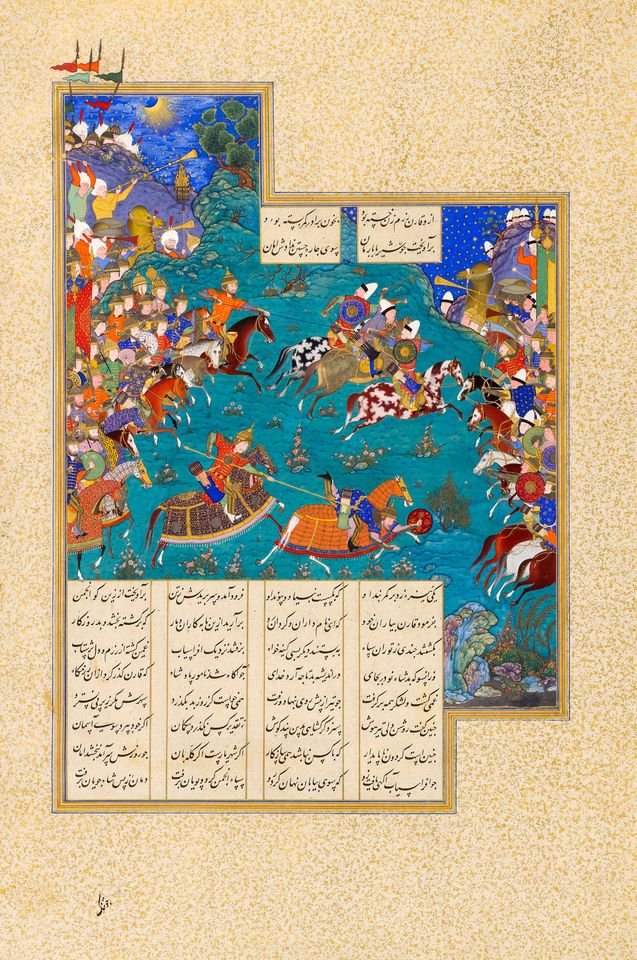 Detached folio from an illuminated manuscript of the Shahnameh for Shah Tahmasp (1525-35) © The Sarikhani Collection; courtesy of the V&A

Curators at the Victoria and Albert Museum are in the process of negotiating loans from institutions in Iran for a major exhibition due to open at the London museum next year. Epic Iran, scheduled to run from 17 October 2020 to 4 April 2021, will bring together more than 300 objects—including sculpture, photography and textiles—from ancient, Islamic and contemporary Iran.

Tensions between the US and Iran have escalated in recent months. Early last year, President Trump abandoned the nuclear deal with Iran and reinstated sanctions. On 19 May, the US leader tweeted: “If Iran wants to fight, that will be the official end of Iran.” Last month, two oil tankers in the Gulf of Oman were attacked, with the Trump administration blaming Iran.

The Epic Iran exhibition is challenging and “more valuable as the sanctions [against Iran], the militaristic language [increases]”, said the V&A director Tristram Hunt at a press briefing today on the museum’s 2020 programme. “We are working with the National Museum in Tehran... but the landscape is not easy.”

The show will include works borrowed from collections in Iran, Russia, Paris and the UK, he said. The private Sarikhani Collection, based in Oxfordshire, is lending an illuminated manuscript of the Shahnameh for Shah Tahmasp (1525-35).

The exhibition’s curator, Tim Stanley, confirms that negotiations are ongoing with Iranian institutions, although the object list has yet to be confirmed (numerous works will be drawn from the V&A's own collection). Sponsors are also being sought for the show. “It’s a tough [funding] environment,” Hunt says.

The V&A has also faced controversy over philanthropic donations it has received from the Sackler family. Members of the Sackler family and its company Purdue Pharma are accused in multiple US lawsuits of fuelling the opioid crisis by aggressively marketing the prescription painkiller OxyContin and misleading doctors and patients about its addictive qualities—allegations that the company denies.

In an interview with BBC Radio 4 today, Hunt said: “like many other institutions, we receive very generous support from the Sackler family, and we remain grateful for that. The Sackler family has said that they will not be giving any more funds to cultural institutions into the future.”

Theresa Sackler, the chair of the Sackler Trust, sits on the V&A’s board of trustees. She was the third wife of Mortimer Sackler, a former chief executive of Purdue who died in 2010, and is being sued personally over the opioid crisis. In March, she announced that the Sackler Trust and the Dr Mortimer and Theresa Sackler Foundation were suspending all new charitable giving in the UK.

Hunt told Radio 4 that: “[Theresa Sackler] is a fit person to be a trustee. The Sackler family dispute what is in the courts.” At today’s press briefing he said that the V&A, which inaugurated its new Sackler Courtyard in 2017, will not remove any labels bearing the Sackler name. He added that Theresa Sackler’s second four-year term as a trustee ends in November.

According to a V&A spokeswoman, Theresa Sackler may reapply for the position via the UK government’s Department for Digital, Culture, Media & Sport, which appoints museum trustees.