Valie Export: ‘Female artists are disadvantaged because the market is determined by men’ 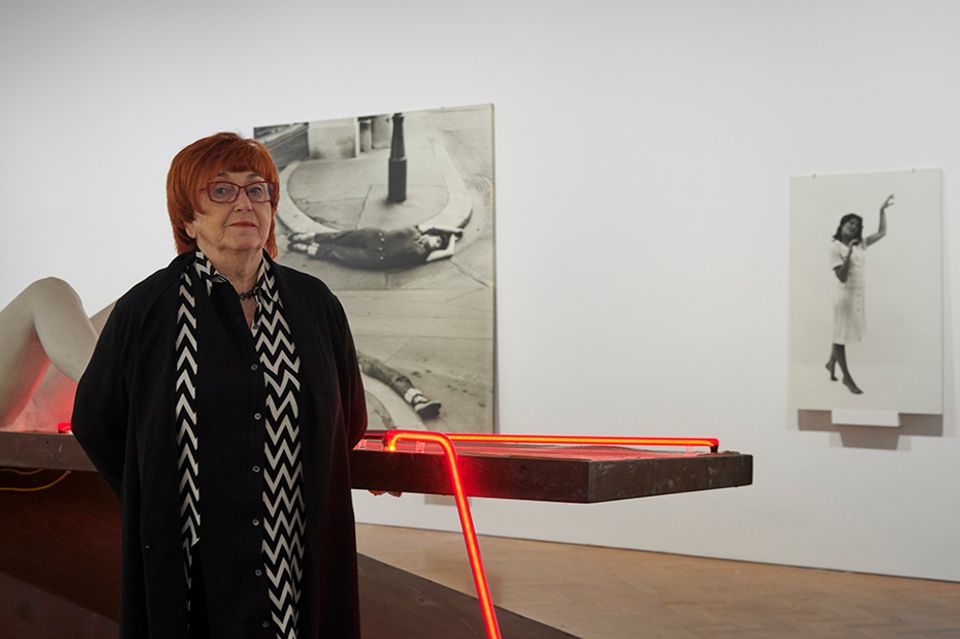 Forty years ago, when Valie Export presented her “birth bed” installation in the Austrian pavilion at the Venice Biennale, the reaction was “so-so”, she says.

The sculpture—consisting of a pair of women’s legs mounted on a rusted steel bed with a stream of red neon running from between them—was startling enough for its unabashed depiction of childbirth or menstruation, but it was also shown with a looped video of a Catholic priest saying mass.

Both in Italy and in her native Austria, where Export grew up Catholic, people “didn’t dare comment”, she says. “It was an unspoken subject.”

Now Export’s installation is being exhibited in its entirety for the first time since 1980, at Thaddaeus Ropac gallery in London. Her Gerburtenbett sculpture has been installed, as it was in Venice, surrounded by photographs from her Body Configuration series (1972-76), in which Export inserted her body into urban landscapes, mainly in Vienna.

In one image she drapes herself around the bend of a pavement, the curb painted with fluorescent paint during the Second World War to guide people to bunkers in the absence of street lights. In another she lies facedown on a zebra crossing, bottom in the air.

Export is reluctant to be drawn on how she thinks the installation will be received today except to say that she is “curious”. She adds: “There are fewer Catholics in London than Venice or Vienna, so…” As a child she was intrigued by the rituals of Catholicism; now she describes the Church as “another patriarchal structure”. 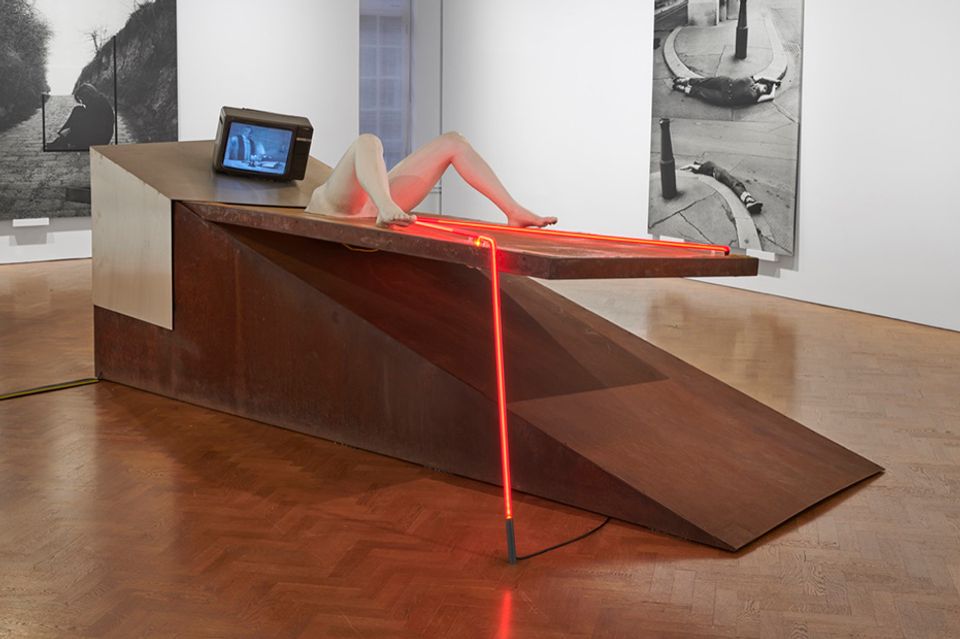 Since Export was born Waltraud Höllinger in Linz in 1940 (she changed her name to Valie Export, rendered all in capitals, in 1967) there have been several waves of feminism, but the artist believes progress has been negligible. “#MeToo has been helpful, but we have only achieved 10% of the mission of feminism,” she estimates.

The pay gap remains a key factor, according to the artist. “There seem to be fewer achievements now, particularly economically, if you look at the wage disparity, that’s a major problem,” she says.

Export’s own market has been woefully undervalued, a common scourge among performance artists whose only commercial outlet is often photographic documentation. Her auction record, achieved at Christie’s former South Kensington branch in 2013, stands at £43,750 for a photograph memorialising her 1968 performance, Action Pants: Genital Panic.

Ropac is selling her Body Configurations for between €70,000 and €175,000, while editions (of three, plus one artist proof) are priced at €30,000-€50,000. Her Venice installation, however, is not for sale. Gerburtenbett has been on show at the Belvedere Museum in Vienna for the past five years and before that was on display at Museum Moderner Kunst Stiftung Ludwig, also in Vienna.

Export believes the art market is geared towards male artists because its gatekeepers—dealers and auction house executives—are chiefly men. “The art market is determined by men, that’s why women are disadvantaged,” she says. “It’s not just dependent on collectors, but dealers show and support male artists because that is what collectors prefer. It’s a cycle. It’s a very stale thing.”

Beyond the art world, Export suggests income inequalities could contribute to domestic violence. “The family is the place where most of the violence is perpetrated,” she explains.

“Maybe there would be less tension and violence at home if women were equally paid. Women are accused of not bringing home the same amount of money as men, and then men say they shouldn’t do the housework because they bring in the money. It’s a source of tension.”

Wearing a shirt dress with tartan sleeves and dyed copper hair spiked up at the front, Export retains a good pinch of the punk spirit that saw her march into a movie theatre in Munich in 1968 in a pair of leather trousers with the crotch cut out, exposing her genitalia. 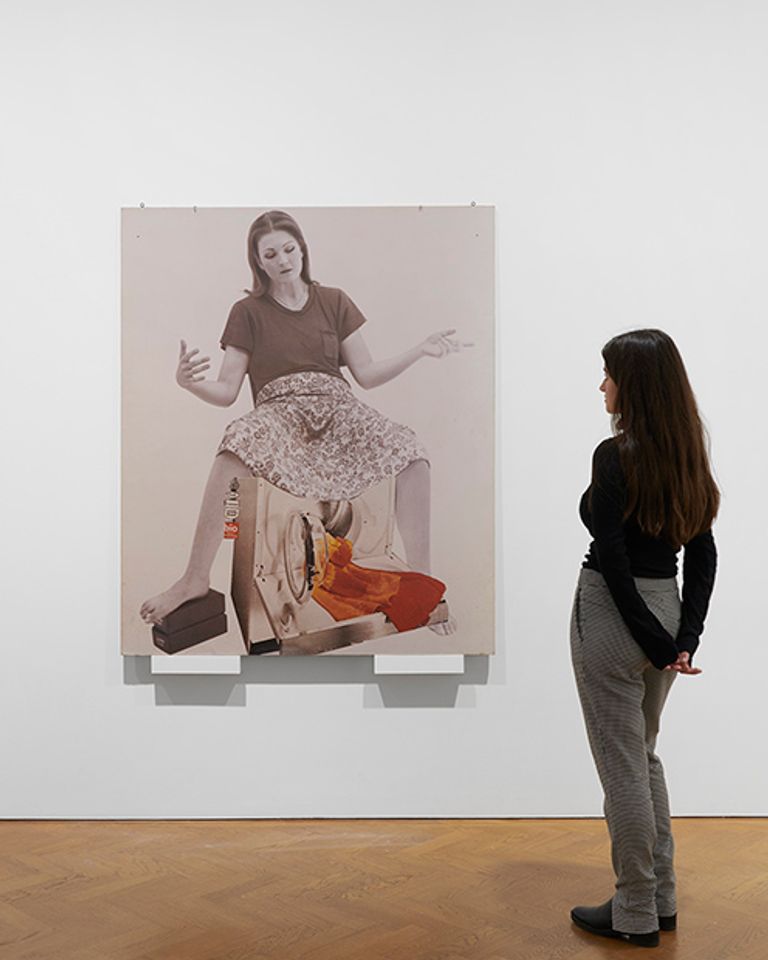 The work, titled Action Pants: Genital Panic, is arguably Export’s most famous. Having plunged the cinema in total darkness, Export stalked the aisles, challenging the audience to look at a “real woman” instead of the images on screen.

“Very soon I realised people were leaving because of their uneasiness. The image was so close to them, it was very challenging,” Export recalls. “There was not enough space to bend down, they couldn’t turn around. They were trapped. You could only leave before Valie came up to you.”

As for women artists rising up the ranks today, Export encourages them to be introspective, experimental and, then, political. “When art brings these things together it can be a very important agency for change, in society and culture.”