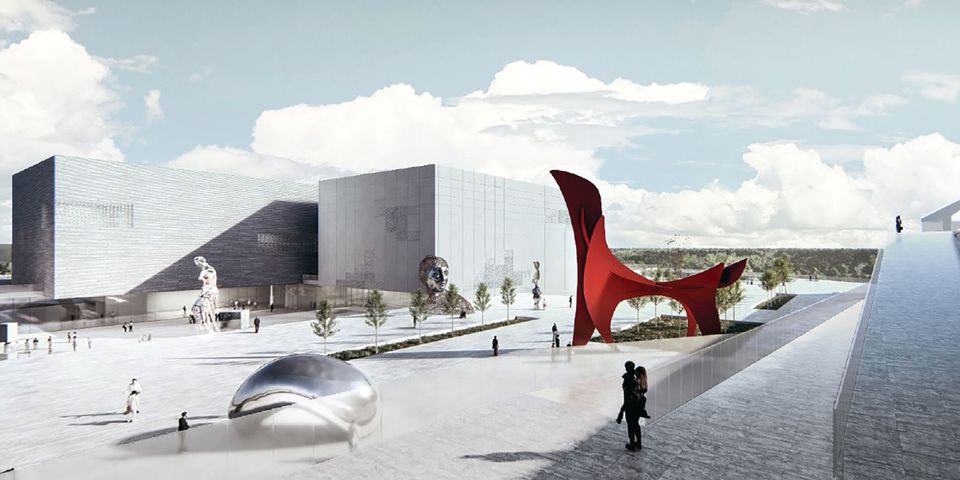 Construction on the 70,000 sq. m facility south of Moscow is expected to start in 2020 Rendering courtesy of stroi.mos.ru

The city of Moscow is planning a state-of-the-art open storage centre for 23 municipal museums and four Russian national institutions, including the State Tretyakov Gallery and Rosizo, the culture ministry’s exhibitions branch. In October, the office of mayor Sergei Sobyanin announced that the local architectural firm IQ had won a competition to design the complex, with construction due to start in 2020.

Sobyanin has driven the city’s rapid expansion into a conglomeration called New Moscow, saying that mega-cities boost economic growth. According to a report issued by his office, the new museum complex will consist of five buildings in the developing southern district of Sosenskoe. The main museums will each have architecturally distinctive spaces: Russian avant-garde for Rosizo; decorative brick for the Tretyakov; travertine, marble and porcelain tiles for the State Historical Museum; and perforated slabs for the Second World War Museum.

The exact site is near Kommunarka, a pre-revolutionary estate that became a collective farm and then a Stalinist killing field in the 1930s. As well as storing thousands of museum artefacts, the planned complex will have public facilities including exhibition halls and a theatre for lectures, films and concerts, with parking available for tour buses. Two new metro stations opened nearby in June 2019.

A Moscow government official, Vladimir Zhidkin, told local media that the museums hub will span 70,000 sq. m—bigger than the Winter Palace of the State Hermitage Museum—with 20,000 sq. m run by the city, 40,000 sq. m under the federal government and 10,000 sq. m of exhibition space. The city is providing preliminary funds, with federal support kicking in later, but a budget has not yet been disclosed.

The facility will be vital for the Tretyakov as it prepares for a major reconstruction of the New Tretyakov building in 2023. The museum’s director, Zelfira Tregulova, has said that construction in Kommunarka “will be completed by then and we will move there”. Aleksandra Roshchuk, a Tretyakov official in charge of site management, tells The Art Newspaper that two exhibition halls of the storage centre will present “digests” of the collections of the Tretyakov and the State Historical Museum.

But the Pushkin State Museum of Fine Arts, which is also embarking on a massive expansion and renovation of its main building near the Kremlin, will not move its 600,000-strong collection to the suburbs. According to Natalia Krutilina, the museum’s director of development, the Pushkin is creating a storage and restoration centre onsite that will also host exhibitions. The new building is expected to be ready for visitors by the end of 2021, with the reconstruction of the main building to follow by 2023.

However, the Pushkin eventually hopes to store works from Russia’s National Centre for Contemporary Arts, which it will run from 2020, in New Moscow.