Contrary to assurances, the MSC Opera was sailing under its own power, reports the navy 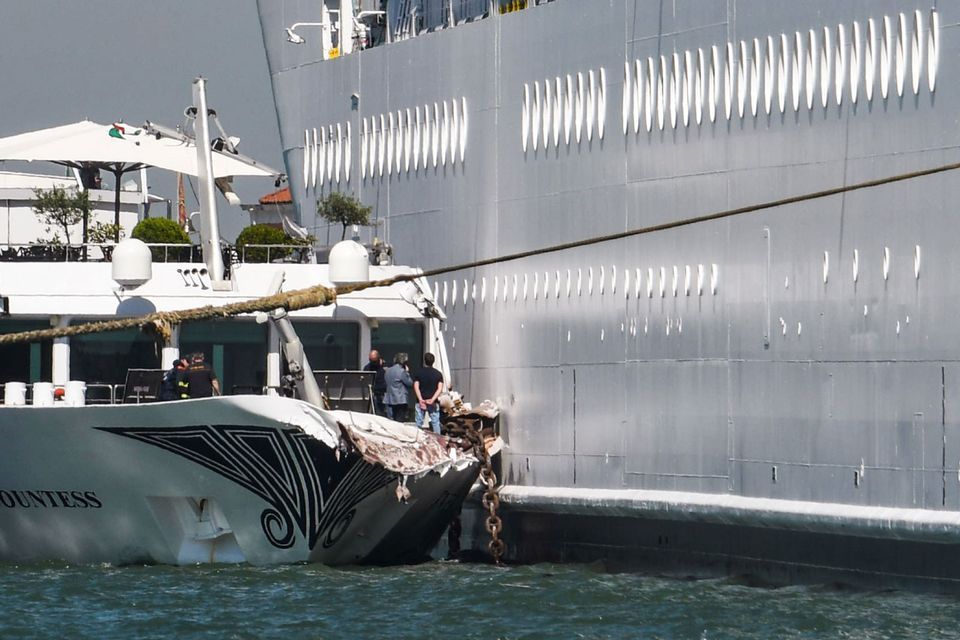 "It couldn’t possibly happen here; it’s a gross exaggeration; it’s fake news." This is not US President Donald Trump talking about coronavirus (Covid-19) early last month, but the state official responsible for the historic buildings of Venice persuading the Venetians that they have nothing to fear from the vast cruise ships.

Renata Codello, then Soprintendente per i Beni architettonici e il Paesaggio di Venezia, was captured on video in 2008 assuring an interviewer that these could not possibly damage the city because they entered with their propellors switched off and pulled by tugs.

This is untrue, reveals the report lodged with the public prosecutor by three Italian navy experts late last month regarding the incident on 2 June 2019, when the MSC Opera crashed into the bankside near the port of Venice, damaging a river cruiser and causing four elderly tourists to be slightly hurt.

The navy’s report lays the blame squarely on the Opera’s captain and crew, who, it says, were inadequately trained to deal with an emergency. The ship sailed under its own power into Venice and turned left into the Giudecca Canal, when its steering failed. This was communicated to the bridge, but not by the captain to the pilots who came aboard shortly afterwards. The captain failed to press the button that would have stopped the engines instantaneously, so the tugs were unable to control the ship’s trajectory, the hawser to one of them snapping.

Although the Opera is one of the smaller of the 600 cruise ships that entered Venice last year, it is still 275m long—nearly the length of three football fields—and weighs 66,000 tonnes, so its capacity to ram through the fragile historic fabric of Venice is great. Fortunately, it struck the bankside at an oblique angle and, at the time, Toto Bergamo Rossi of Venetian Heritage, a non-profit organisation specialising in conservation projects, told The Art Newspaper, “This bankside near the port is recent and of cement and therefore strong enough to resist the impact. But the banksides of San Marco, San Giorgio or Punta della Dogana are not; it could have been a disaster,”

Then, on 6 July 2019, the even larger, 93,000 tonne, cruise ship Costa Deliziosa was nearly blown onto the Riva Sette Martiri near San Marco. But despite these near calamities, no progress has been made on the various schemes to keep the cruise ships out of the centre of Venice.

The mayor, Luigi Brugnaro, is an entrepreneur who aims to keep the cruise ships with their 1.8m passengers a year tying up at the port inside Venice, so he is ignoring the 2014 Unesco requirement to keep all big ships right out of the lagoon. He wants them to enter the lagoon at the Malamocco opening instead of the Lido’s, as at present; the currently disused channel, the Vittorio Emanuele III, would be deep-dredged to allow them then to enter Venice at the port end of the city. But this would cause ecological damage to the lagoon, as well as risk a collision between a cruise ship and the petrol tankers that already use this entrance.

There is a better plan, which already has the approval of the environment agency and satisfies the 2014 requirement that the ships not enter the lagoon. It is to moor them at a floating port that would be built at San Nicolò outside the Lido opening. Eco-friendly, electric, wake-less catamarans would then ferry passengers 300 at a time to various parts of Venice, thereby reducing congestion at the present access points to the town.

Unfortunately, the 2019 Unesco World Heritage Committee meeting in Baku gave its approval to the Malamocco solution, going against its own earlier recommendation. But rapid action is unlikely. This plan still needs to be assessed for its potential environmental impact, and coronavirus has put Italy’s public expenditure on hold, so the necessary infrastructure work would be delayed. In the meanwhile, coronavirus has deeply shaken the public’s faith in the cruise industry.