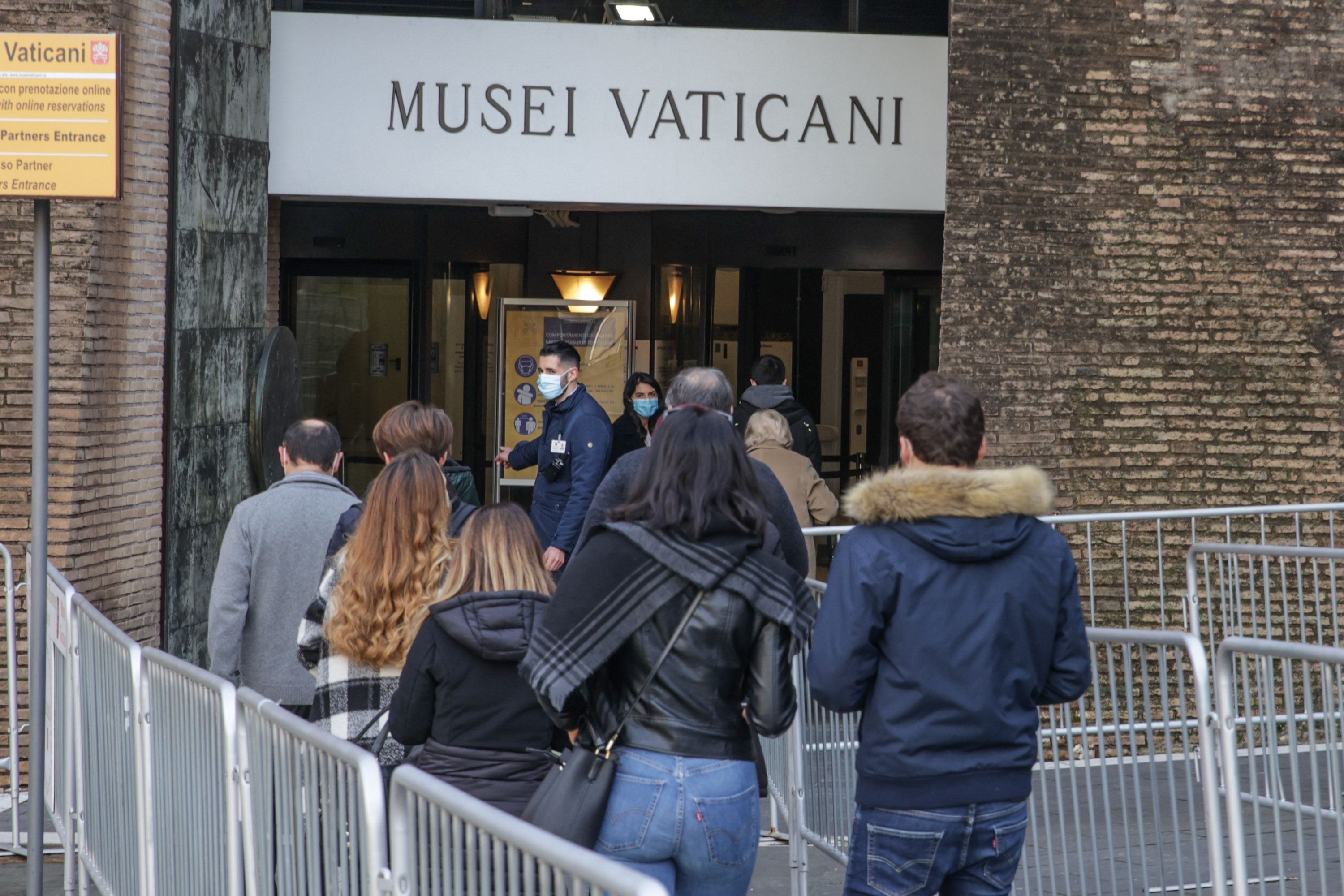 Visitors queuing for the Vatican Museums, which reopened to the public on 1 February after three months’ closure © IPA MilestoneMedia/PA Images

The Vatican Museums has been criticised for its lax Covid-19 security procedures by visitors trapped in overcrowded galleries last Saturday.

Museumgoers took to social media to complain about the institution’s failure to implement effective social-distancing measures in some of its most popular spaces last weekend, in particular those decorated with frescoes by Raphael and his workshop.

Vincenzo Spina, a tour guide who led a group through the museum on Saturday afternoon, said they were stuck in the Hall of Constantine, the first of a sequence of four Raphael rooms, “surrounded by people” and unable to move for 15 minutes when a museum guard “who appeared utterly confused” temporarily stopped access to the following room. It was “like the metro in rush hour,” Spina wrote on Facebook.

Another visitor who took a 2:30pm guided tour of the museum on Saturday afternoon described the crush in the Raphael rooms as “scandalous” on the travel website Tripadvisor. Yet another said there was a “total” failure to respect Covid-19 guidelines.

Spina told La Repubblica newspaper that his visit to the Raphael Rooms descended into “chaos” because the crush of visitors was so bad that no-one was able to move “either forwards or backwards”.

In an open letter to museum management posted on Facebook, he added that he was “deeply ashamed” and “embarrassed” that he had led a group of unsuspecting tourists into a situation which he likened to “Dante’s inferno.”

“There was no social distancing, no organisation”, Spina said, which left visitors “shocked and afraid” and even led to some instances of “individual and collective hysteria”, according to the tour guide.

“It is hard to understand how this could have happened [because] the Vatican Museums has had months to prepare for its reopening,” Spina said.

It is unclear why museum staff was unable to control the flow of visitors.

When asked to comment, the Vatican Museums sent The Art Newspaper a statement prepared by director Barbara Jatta for the Italian press agency ANSA. In it, she dismisses reports of overcrowding.

“I was in the museum myself last Saturday guiding some visitors through the galleries and the situation was not as dramatic [as reported on social media]. I find the controversy stirred up by some guides quite silly. First they complained that the museum was closed, then, after 88 days of forced closure, they complain when we reopen,” Jatta said.

The Vatican Museums reopened to the public on 1 February after three months’ closure during the second, national pandemic lockdown in Italy.

Visitors are now required to book timed tickets in advance and, once inside the museum, they must wear masks; “maintain an interpersonal distance of one metre”, and “avoid gatherings” according to instructions on the Vatican Museums’ own website.

Although all major museums in Europe are predicting drastically reduced visitor numbers when they reopen after long lockdowns, the Vatican incident shows that things can still go wrong fast if the flow of visitors to popular galleries or works of art is not managed effectively.