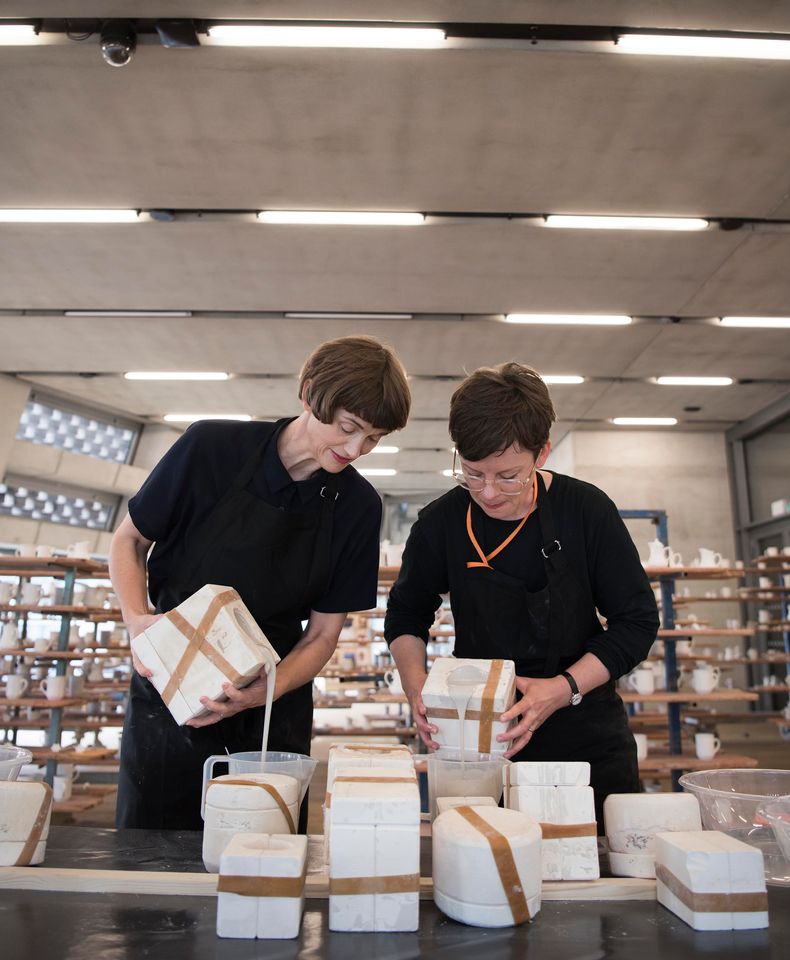 Clare Twomey and a "factory manager" at Tate Exchange, pouring clay into a mould Oli Cowling and Tate

Visitors to Tate Modern last weekend may well have stumbled upon a production line of budding ceramicists. The interactive project was conceived by the UK ceramicist Clare Twomey, who has turned the Tate Exchange education space in the Switch House into a vast ceramics factory complete with 40 staff and eight tons of clay.

Members of the public donned aprons and clocked in to make pots and flowers for the initiative, which is titled Factory: the seen and the unseen. A special app with a 3D scanning station enabled visitors to document their creations online. “Exchange your object for another object in the value area of the Factory, enter the new object number into the app. This way you will be exchanging virtually and physically,” says a statement on the clocking-in card.

Twomey says in a statement: “When the factory is live, it will draw us into its rhythm of the tasks of labour, the enchantments of handling materials, the languages of labour, skills and craft in repetition and the development of knowledge.” One visitor entering the space was taken aback by the raw materials used. “Oh lord… all this clay,” she said.

Twomey developed the concept with Dudson, a family business in the ceramic tableware industry founded in Stoke-on-Trent in 1800. Quizzed further about the motivation behind the scheme, the artist says: “Everything just appears in the world. Here, it is made right in front of people; we’re unravelling the human element [of production].”

The production line stopped on Sunday (1 October); during the second week (5-8 October), the space will turn into a “factory soundscape” exploring issues such as collective labour and how future factories will function. High-profile sponsors of the project include the London-based collectors Maryam and Edward Eisler, the UK charity Art Fund and the Paul Hamlyn Foundation.