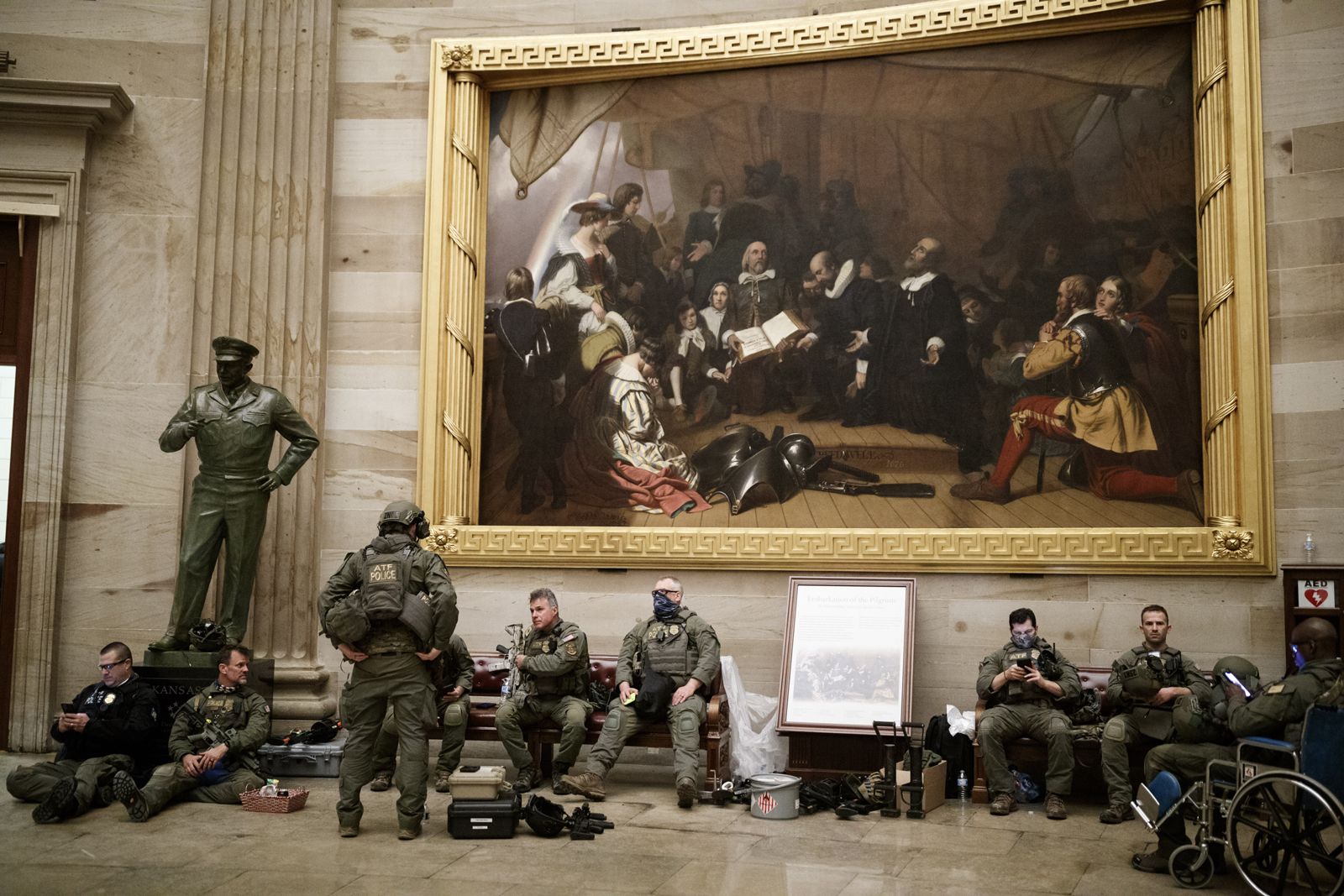 Members of law enforcement rest beneath Robert Walter Weir's painting Embarkation of the Pilgrims (around 1837) in the rotunda of the US Capitol in Washington, DC. Photo: Ting Shen/Bloomberg via Getty Images

In the minutes and hours after a pro-Trump mob stormed the US Capitol in Washington, DC yesterday, leading art world figures took to social media to express their anger and dismay at scenes including videos showing police opening barricades to rioters and posing for selfies with perpetrators.

Some commentators stressed the contrast between the law enforcement reaction to the mob breaking into the Capitol and the massive show of police force for Black Lives Matter demonstrations in the capital last year. The US artist Dread Scott summed up the sentiment in an Instagram story: “People in DC protesting the police lynching of George Floyd get maced and beaten. Fascists storming the US Capitol during an attempted coup get a welcome mat. Any questions?”

Many others pointed out US President Donald Trump’s hypocrisy when it came to Black Lives Matter protestors over the summer, whom the outgoing president described last August as “anarchists, agitators, rioters, looters and flag burners”. He added: “I as your president will not be part of it. The Republican Party will remain the voice of the patriotic heroes who keep America safe.”

Yet, last night, Trump told rioters: “We love you, you’re all very special.” He later told them to go home, but not before the mob had breached security including one man who posed for a photograph inside the office of the US House speaker, Nancy Pelosi.

The New York-based artist Marilyn Minter shared the image on her Instagram account, with the comment, “this scumbag is sitting at @speakerpelosi desk”. Another rioter, wearing a Trump bobble hat, was photographed apparently looting a podium. Others posed obliviously under John Trumbull’s 1826 painting, Surrender of Lord Cornwallis, in the rotunda of the Capitol.

The US artist Glenn Ligon referred to the New York Times columnist Charles M. Blow, who presciently wrote in 2019: “Before Trump will allow himself to be chased from the temple, he’ll bring it down.” Ligon added: “If black folks had stormed the capital [sic] we’d be seeing them come out in body bags.” The New York dealer Jack Hanley echoed his position: “Imagine BLM people doing this.”

Some pointed out the inevitability of the situation but also to the fact it was actively encouraged. Josh Siegel, a curator in the department of film at the Museum of Modern Art in New York, posted: “The most sickening thing? Not how utterly predictable this is, as the culmination of 4 years and 250 years of hatred, but according to the NYT, people close to Trump are certain Trump wanted this and is enjoying it.”

Others hinted at the almost movie-like nature of events. The Chinese artist Ai Weiwei posted an image of security forces with their guns drawn on the house floor with the simple caption: “reality show”. One woman was fatally shot inside the Capitol building, while three others also died due to separate, as-yet unspecified “medical emergencies”.

Klaus Biesenbach, the director of the Museum of Contemporary Art in Los Angeles, asked for “comments please” beneath a picture of the Capitol surrounded by the Trump mob.

The US collector and dealer Stefan Simchowitz responded: “Trump is a traitor at this point and any board member who still supports him and the party should be removed Post Haste. This is sedition. Clean up the back yard.” Meanwhile, the Brazilian artist Vik Muniz left the comment: “I expected anything from Trump but The Village People taking over the Capitol.”

Joe Biden was formally recognised by Congress today as the next US President ending months of failed legal challenges by his predecessor to overturn the election result. The UK artist and Royal Academician Bob and Roberta Smith posted a celebratory message on Instagram saying: “We did it. We did it Joe. You’re going 2 B the next President of the United States.” Trump and other Republican senators who rejected the certification of Biden must be charged with insurrection, adds the artist.

Because of what is widely viewed as his incitement of the marauders via social media, Trump was suspended by gatekeepers from his Twitter account for 12 hours and has been blocked from using Facebook and Instagram indefinitely.