What is art for? Why, to help sell arms, silly! 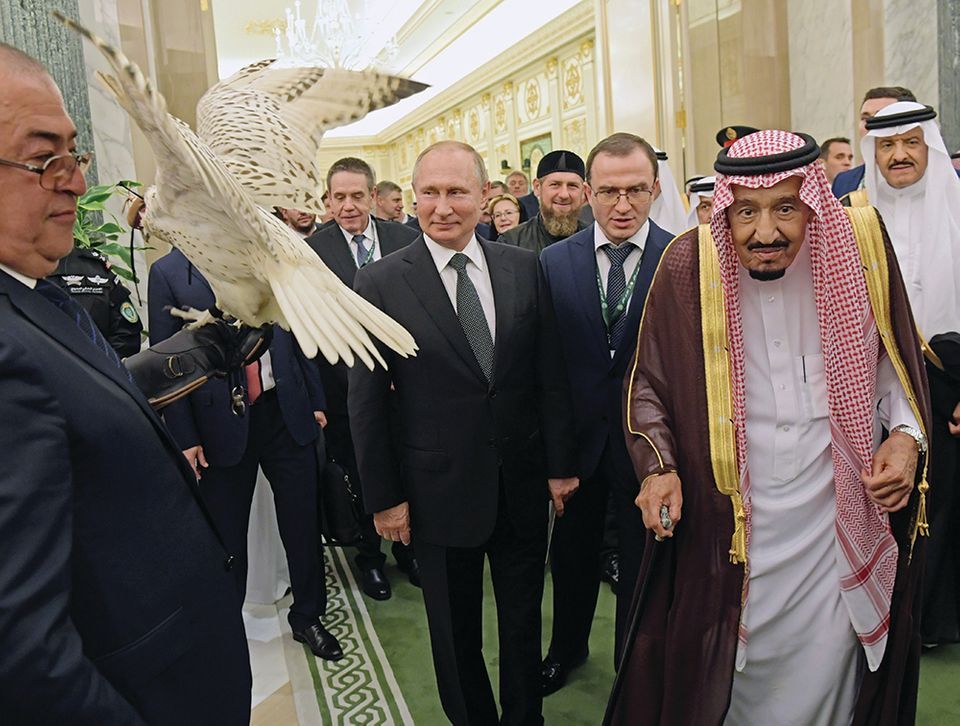 Events last month have demonstrated that art and culture play as much of a role in international diplomacy today as when Louis XIV loaded the sultan’s ambassadors with Boulle clocks and Gobelins tapestries. In the realigning alliances of the Middle East, every instrument is played to help make friends and influence people.

On 14 October, Putin arrived in Saudi Arabia for the first time in 12 years, sweeping into Riyadh with an honour guard of 16 beautiful Arabian horses and bringing with him a Kamchatka falcon and a loan exhibition from the State Russian Museum of 19 Kandinskys, on show in the King Fahd Cultural Centre, until 19 November. Among his entourage was Mikhail Piotrovsky, director of the State Hermitage Museum.

King Salman bin Abdul Aziz al-Saud announced that the Public Investment Fund of Saudi Arabia had allocated $10bn for joint projects with the Russian Direct Investment Fund; 42 joint co-operation agreements were signed dealing with oil, agriculture, artificial intelligence and railway construction, while arms sales—a potential new area for Russo-Saudi trade—were discussed. Culture was covered by a five-year memorandum regarding exchanges for the performing arts, librarianship, and collaboration with the Hermitage over archaeology and joint expeditions.

These are not the first Kandinskys to go on show in the Kingdom. At the contentious Future Investment Initiative known as the “Davos in the desert”, held between 23 and 25 October 2018, when many business leaders and government officials stayed away because of the murder on 7 October of the journalist Jamal Khashoggi in the Saudi embassy in Istanbul, the Russians, including Piotrovsky, were present in force and brought with them five Filonovs and Kandinskys as a teaser for this bigger show.

On that occasion, Piotrovsky told RIA Novosti, the official Russian news agency, that Crown Prince Mohammed bin Salman (MBS) had said to the Russian, Chinese, Japanese and French businessmen present, “Now we know who our best friends are and who are our best enemies.”

In fact, the French government has shown no compunction about highly visible collaboration with the Saudis, despite international outrage at the murder. Only a day after Turkish officials announced that Khashoggi had been murdered, French President Emmanuel Macron issued a decree officially confirming the Franco-Saudi collaboration on a huge cultural and tourism development in Al-Ula Province. This joint project, estimated to cost $50bn to $100bn, with large consultancy fees going to the French, had been announced the previous April, at the same time as a new intergovernmental agreement on defence contracts between the two countries. (France is the third biggest arms exporter in the world and its sales to Saudi Arabia increased by 50% in 2018, according to a Reuters report in June.)

Working with the Royal Commission of Al-Ula, whose president is MBS, the French agency running the development is called Afalula (Agence Française pour le Développement d’Alula), whose “directeur scientifique” is the museum curator Jean-François Charnier, who had the same role at the Louvre Abu Dhabi.

An exhibition called AlUla: Wonder of Arabia is now at the Institut du Monde Arabe (IMA) in Paris until 19 January 2020, about the natural wonders of this north-west corner of Saudi Arabia, its largely unexplored archaeological history, the impressive Nabataean site of Hegra (known as Mada’in Saleh), and the oasis town of Al-Ula, which was described by the traveller Ibn Battuta, who stayed there in 1326 on his way to Mecca, as a fine, large village with palm groves, where the pilgrims would rest for four days. Its labyrinthine mudbrick houses were inhabited as recently as 1980s.

The French have been excavating in this vast area since 2004, but whole civilisations are waiting to be discovered: the kingdoms of Dadan (9th-6th century BC) and Lihyan (6th-2nd century BC), the latter of which coincides with the arrival from the north of the Nabateans (Petra is their best-known creation), who settled at this crossroad of the incense trade. “We don’t even know who inhabited the oasis at that time,” says Charnier, who at the moment is concerned with finding out how much water is in the aquifers of the oasis, as this will greatly affect any development plans. The blurbs accompanying the exhibition stress that this is to be “light touch” tourism with “light touch” infrastructure, fenceless surveillance and rangers trained to protect the wildlife, which includes the critically endangered Arabian leopard.

The reciprocal cultural benefits of this diplomacy will trickle down as far as IMA, which is perennially short of money because it depends largely on contributions from 18 Arab states, which are bad payers. Its engineering tour de force by Jean Nouvel—also the architect of the Louvre Abu Dhabi and Doha’s National Museum of Qatar—is its metal window screens that are supposed to open and close in response to the sunlight, but which stuck shortly after the building was inaugurated in 1987. Now, with a €5m contribution from the Saudis, these may at last be made to work again.