Where science and art collide

Liverpool’s Fact partners with Geneva’s Cern on an artist residency, while the artist Ryoichi Kurokawa collaborates with the astrophysicist Vincent Minier to depict the birth of stars

Science and art find common ground at the Foundation for Art & Creative Technology (Fact) in Liverpool. Earlier this year, it launched a three-year partnership with the Geneva-based nuclear physics research organisation Cern. And this month, it is hosting an exhibition about the origins of the solar system, that comes out of a collaboration between an artist and an astrophysicist.

As well as exhibitions and public programmes, Fact’s partnership with Cern has resulted in an international competition for the artist residency Collide, which launched on 11 March and is open until 23 May. The winning artist will get a chance to spend two months at Cern’s Swiss laboratory, home to the Large Hadron Collider, the world’s largest particle accelerator, and one month in Liverpool, to realise their proposal.

Meanwhile, through the project Unfold (until 12 June), the Japanese artist Ryoichi Kurokawa wants to depict nothing less than the origin of the solar system, paint a picture of where it is going and what it might look like when it ends. Kurokawa aims to recreate the disorienting experience of being inside a molecular cloud—the incubators of new stars—using powerful screens projecting colourful visual data representations and floor-shaking surround sound transducers. 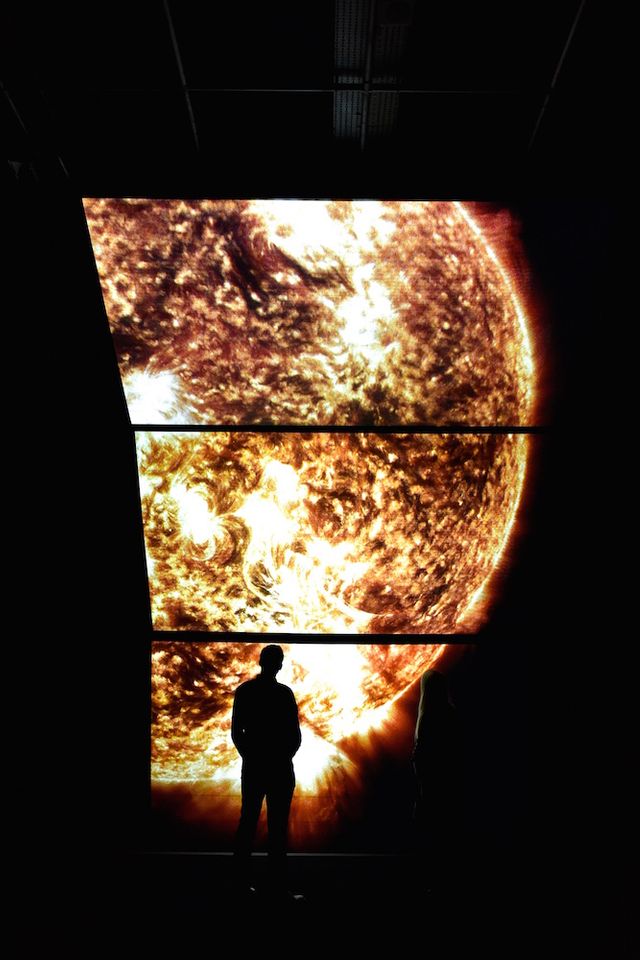 Ryoichi Kurokawa: unfold at the Foundation for Art & Creative Technology in Liverpool

The work is based on new data culled from European Space Agency and NASA satellites, as well as the Herschel space telescope, with help from scientists at the French state-funded Institute of Research into the Fundamental Laws of the Universe at CEA. “We spent four days last year in Nantes, talking about star formation, writing a scientific scenario (about ten stages) and preparing data,” the astrophysicist Vincent Minier, who collaborated with Kurokawa on the project, wrote in an email.

Minier has in the past worked with the designer Paco Abeillera and the artist Elliot Woods on previous works. Astronomers, he pointed out, have to visually represent such data for their papers anyway. Why not turn it into art?

“It is inspiring,” he said, of working with artists. “It is like teaching, since the artist needs to understand the subject (star formation, star evolution…). Then it is important to show that beautiful images in astronomy are made from dataset. They are not coming directly from the telescope.”