Four of the city’s major art museums do not charge an entry fee—but that is more than just a way to boost visitor numbers, they say 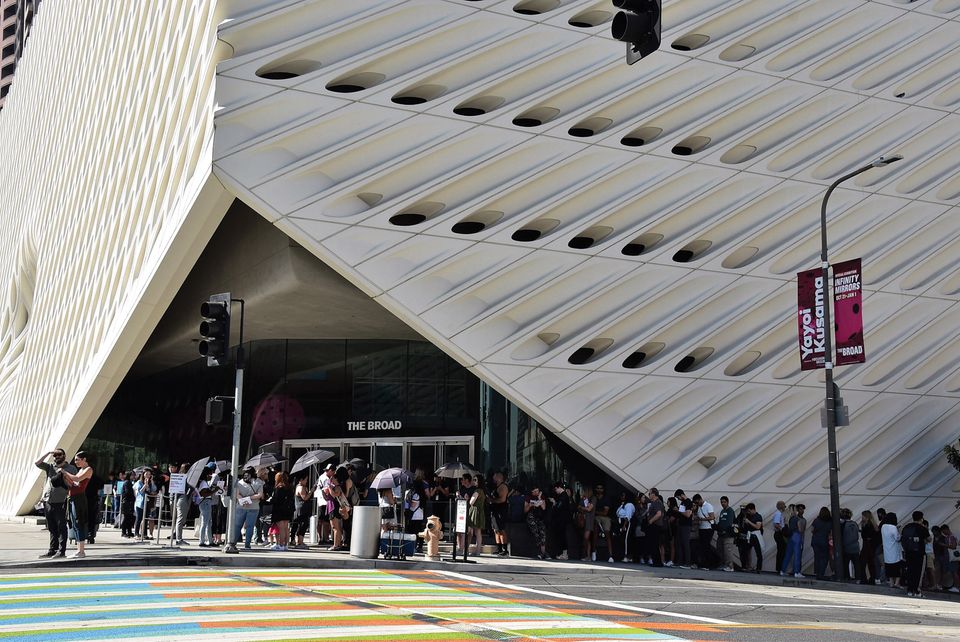 Queues snaking around the Broad, which has offered free general entry since it opened in 2015; visitor numbers have steadily increased from around 750,000 in its first full year to more than 900,000 in 2019 Kyodo News/Getty Images

The coronavirus has changed US museums’ priorities faster than you can buy hand sanitiser—instead of trying to pack their galleries, institutions have closed their doors altogether to limit virus transmission.

But the question of whether attendance is the best measure of success for museums was alive and well long before the virus figured in, and the debate has played out dramatically in Los Angeles over the past five years. While the Broad opened in 2015 with an explicit mandate from the philanthropist- collectors Eli and Edythe Broad to become a major civic destination drawing serious crowds, the director of the Museum of Contemporary Art (MOCA), Klaus Biesenbach, has tried to change the terms of that conversation, insisting that beefing up lacklustre attendance figures is not his goal.

Biesenbach made that clear while unveiling plans for free admission last year, generally seen in the industry to be a bid for increased attendance. Indeed, Los Angeles is home to what might be the biggest experiment today with free admission, with all three of its big contemporary art museums—the Hammer, MOCA and the Broad, as well as the more encyclopaedic-minded Getty—charging no general admission fee.

In announcing the decision to eliminate MOCA’s general admission charge on 11 January amid much fanfare and local TV coverage, Biesenbach insisted that the decision was not a bid for huge numbers. “It’s a step towards being more porous, more welcoming and more open,” he said. “I’m not counting on the audience doubling or tripling, I think that would be the wrong goal. If we have 5,000 people come who wouldn’t come otherwise, that is important.”

So what exactly is the free admission experiment in Los Angeles all about? It depends on whom you ask. All museum directors here see it as a way to make their institutions more accessible to more people, including younger and more diverse demographics. Some have also, pre-virus, seen jumps in attendance as a direct or indirect result.

Since going free in 2014, the Hammer Museum’s reported attendance has grown by about 15%—from around 210,000 in 2013 to around 240,000 now. But the Westwood-based museum is currently undergoing a major $90m expansion by architect Michael Maltzan that could change those dynamics. Due to be completed in 2022, this involves annexing a neighbouring bank building and creating 60% more gallery space and more street-level accessibility and visibility. “We’re still a bit of a secret to the general public,” says the Hammer’s director Ann Philbin, “but I think our building project will change that.” 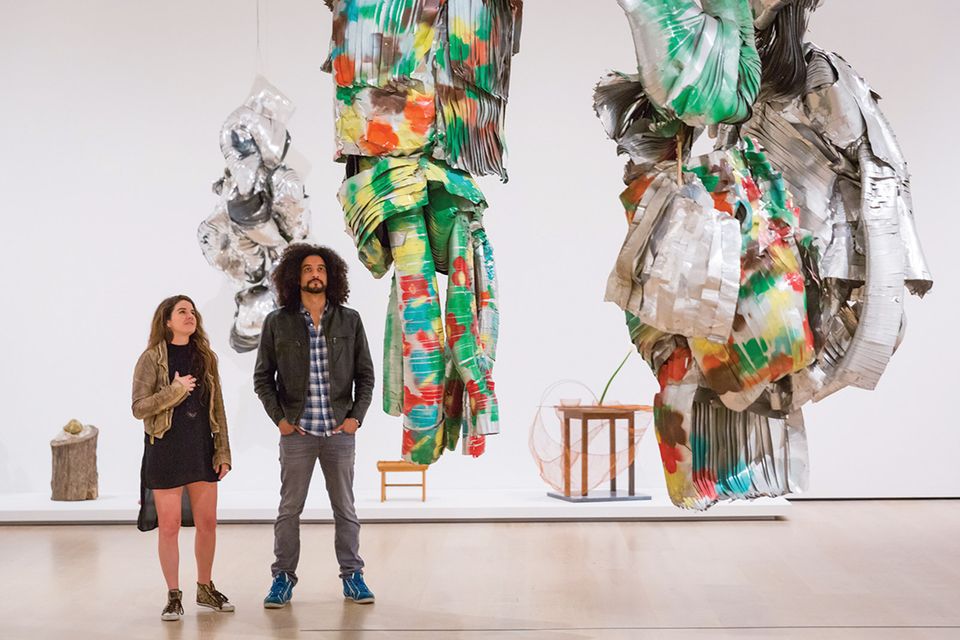 The Hammer Museum’s visitor numbers have increased by 15% since it went free Sarah M. Golonka

The Broad, which has been free to the public for all but special exhibitions since its opening in 2015, has seen more rapid growth. Its first full year, 2016, drew 753,252 visitors and that increased to 917,489 last year, putting it within spitting distance of the Los Angeles County Museum of Art (968,161 in 2019), whose numbers had been declining of late with half of its campus closed for renovation (demolition of the main buildings started last week).

What is most remarkable about the Broad is who it has been reaching: an audience that a museum spokesperson describes as “unusually young and diverse”. Approximately 70% of visitors who fill in surveys near the museum’s exit identify as non-white, compared to an industry average of 27%, she says. Also, 60% of its visitors are under the age of 35, according to last year’s data.

The Broad’s director, Joanne Heyler, says that “free admission has played a big role” in reaching this wide audience but it is far from the only factor. “We took an almost evangelical approach to connecting to a wide-ranging audience,” she says. She offered as examples the inviting building design by Diller Scofidio + Renfro, where you do not have to climb stairs to enter the museum (“you just walk into museum off the sidewalk”). And, instead of the standard, sometimes imposing, information desk when you enter, she says, “we have visitor service associates who are for the most part standing and greeting visitors eye to eye. We also have a lot of digital interface that I think adds to the experience of the museum, not just the collection, feeling very contemporary.”

Because of its strong attendance figures—last year the highest of any US museum dedicated to contemporary art—the Broad has been flooded with questions from other museums. Heyler says that most queries focus on its visitor services programme. But, she cautions, “I don’t think you can isolate any one thing—for us, the goal is to get our family programmes, educational programmes, visitor services and free admission to work together towards being more welcoming,” Heyler says.

Asked why free admission has become a trend in Los Angeles and not New York, she pointed to two things: Los Angeles museums do not generally have the international tourism of the New York institutions (only 30% of the Broad’s visitors are tourists), so they need to appeal to community members in different ways. And the Getty Center (which has a higher proportion of international visitors) “made admission free when it opened in 1997 and was highly popular from day one. I remember the first season it was open, I walked uphill because the trams [to the entrance] were too crowded,” Heyler says.

More recently, the long lines wrapping around the Broad were part of what helped induce MOCA, located directly across the street, to introduce free admission as well—if you believe reports that MOCA trustees kept mentioning the lines, and the Broad’s popularity more generally, in board meetings. For, even though MOCA has a much deeper collection than the Broad, the museum has struggled to draw more than 350,000 visitors a year. Last year attendance was 316,476, a little more than a third of the Broad’s, and below its 2011 peak of 402,255.

One MOCA trustee who supported free admission was Simon Mordant, the chairman of the board at the Museum of Contemporary Art Australia, who helped take that institution free over a decade ago with great success. Another was Carolyn Clark Powers, who underwrote the California museum’s efforts to the tune of $10m.

A MOCA spokeswoman said visitor numbers are not yet available for its 2020 free-admission period but that anecdotally the museum had been doing well, at least until the Covid-19 epidemic began spreading in the US. “We’ve been so excited by the enthusiastic response of the public since 11 January, and it’s great to see so many new faces at MOCA,” she said, the week before museums across the country began closing to the public.