One of the museum’s finest period rooms, the Kaufmann Office is being restored for display in new V&A East collection centre 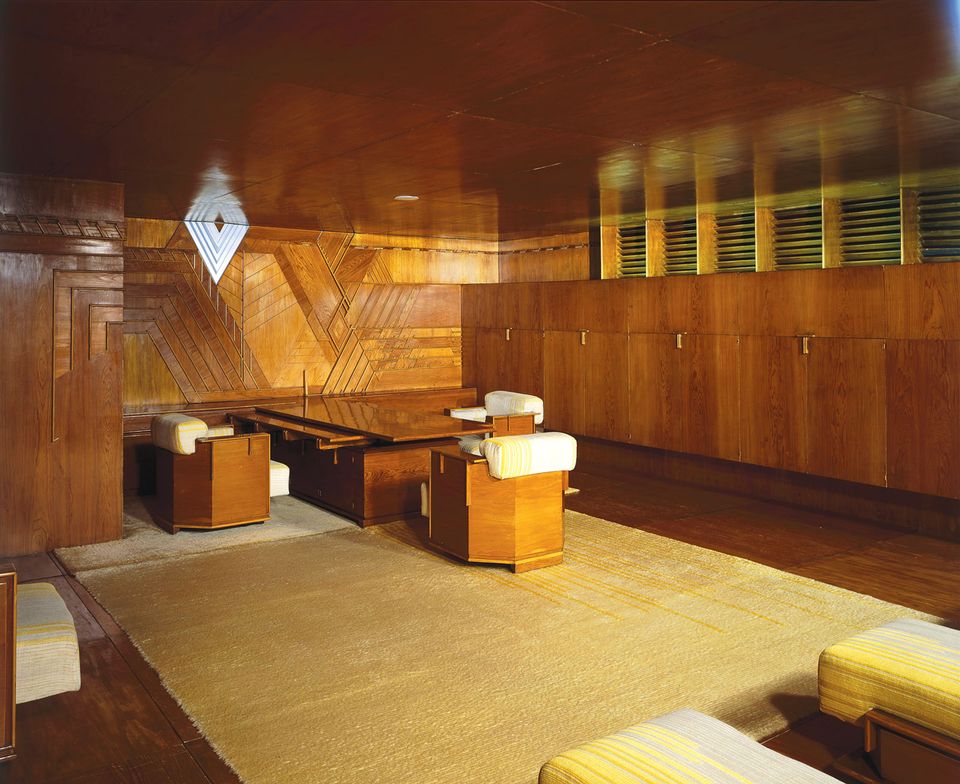 The all-plywood interior, including the ceiling, walls, floor and the cantilevered desk, will go on view at the new V&A East in 2023 © Victoria & Albert Museum; ARS, New York, and DACS, London

The only Frank Lloyd Wright interior outside the United States is undergoing conservation in anticipation of its display in London’s future V&A East in 2023. Assembled from 240 panels of swamp cypress plywood and cypress-veneered blockboard, it served for almost 20 years as the corner office of Wright’s loyal patron, Edgar J. Kaufmann, in his prosperous Pittsburgh department store. It was Kaufmann who also commissioned Fallingwater, the Pennsylvania country house suspended over a waterfall that is now regarded as the architect’s masterpiece.

The Kaufmann Office came to the Victoria and Albert Museum (V&A) in 1974 as a gift from the retail magnate’s son, Edgar Kaufmann Jr, who had been so inspired by reading Wright’s autobiography in 1934 that he joined the community of apprentices in residence at Taliesin, the architect’s Wisconsin home and studio. Although his fellowship was short-lived, Kaufmann Jr sealed the association between his father and Wright, and later converted Fallingwater into a museum.

“The Kaufmann Office is not only one of finest period rooms in the V&A but the most complete of any,” says the museum’s keeper of furniture, textiles and fashion, Christopher Wilk. Every element of the 9m by 8m plywood interior has been preserved—including wall, ceiling and floor panels, a striking geometric relief running the length of one wall, a cantilevered desk and a set of cuboid armchairs and stools upholstered by the weaver Loja Saarinen—except for a triangular glass light fixture, which was re-made in the 1990s based on Wright’s drawings.

Lacking the space to re-assemble the interior in the V&A conservation studios, the museum recently packed all but the chairs and carpets into 42 crates and wrappings for cleaning and repair by the private conservation firm Plowden & Smith. The project, which is due for completion by the end of May, is supported by a €25,000 grant from Tefaf’s Museum Restoration Fund.

This is a “structural consolidation”, says Plowden & Smith’s senior furniture conservator Oliver White, focused on removing the dust from years in storage (the office was last shown at the V&A in 2005, then briefly lent to Tate Britain in 2013) and fixing any chipped edges of the veneers with natural fish glue. The aim is not to erase “signs of wear” that attest to the room’s years of use, such as finger marks around the cupboard doors, but to make sure it is in optimal condition for permanent public display. 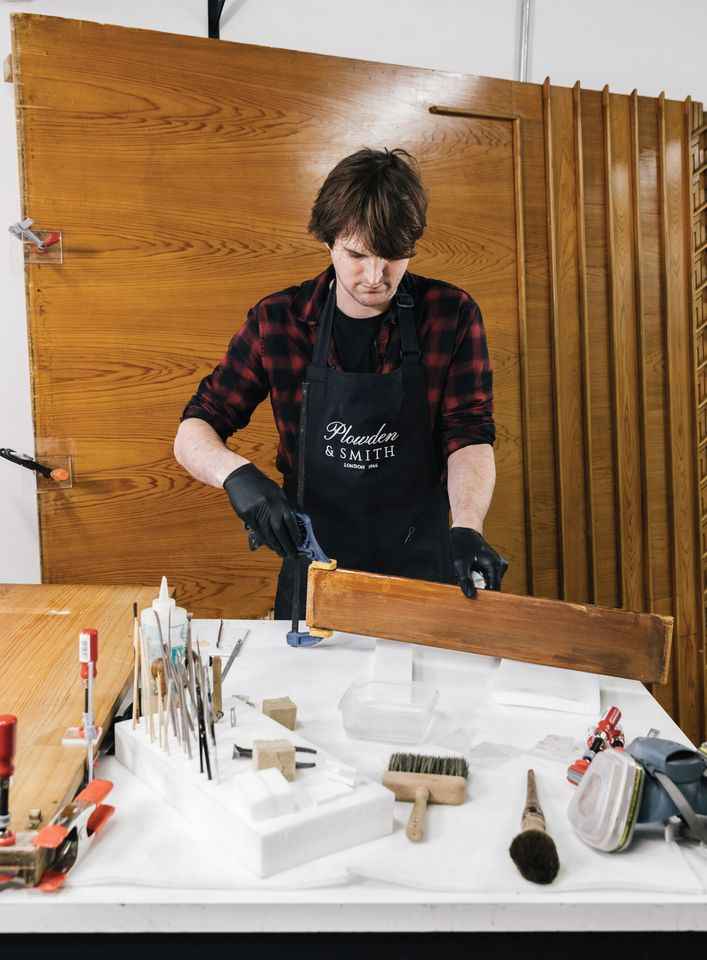 Because of its size, the Kaufmann Office will be one of the first exhibits to move into the V&A’s new collection and research centre, designed by Diller Scofidio + Renfro and currently under construction in the former Olympic Park. This open-access storage facility will be one half of the V&A East, ten minutes’ walk from the new museum.

Plowden & Smith will also help install the office in the collection centre, including any touch-ups needed to the surface finish of the woodwork. The room will be adapted, Wilk says, to allow visitor access at two points. A “narrow bay” will be removed from a louvred wall (which in Kaufmann’s day masked a window) to enable direct views of the desk and the relief mural, he says. And one floor panel will be replaced with a replica so people can stand inside the threshold and “see real architectural space as Wright intended”.

Albeit on a smaller scale than Fallingwater, the Kaufmann Office embodies Wright’s philosophy of “organic architecture”, using materials in “as natural and honest a state as possible” and striving for “an essential unity” in structure and form, Wilk says. “Whenever he could, and his clients were willing to allow it, he designed everything,” down to the furniture, textiles and lighting. Wright, who never lacked for self-belief, “felt other people’s furniture would ruin his design”, Wilk adds.

Despite his healthy ego, Wright’s star was waning when he received the Kaufmann commissions in December 1934. In his late 60s, in the midst of the Great Depression, he had executed only a handful of buildings in the previous decade. Fallingwater ushered in the architect’s great comeback. “That’s why this room marks a key moment in Wright’s career,” Wilk says. “Kaufmann commissioned many buildings from Wright but only these two got built and remain today.”