The greatest work of art at New Haven’s Yale Center for British Art is arguably the landmark building itself—and Louis Kahn’s last structure is due to reopen this month after a 16-month renovation of its public galleries and lecture hall, and an upgrade of its accessibility, security, mechanical and electrical systems. This is the third phase of a $33m conservation project that began in 2008.

George Knight of Knight Architecture, who led the conservation work, says: “The thing that kept me up at night was [thinking] how can we preserve the building, which is so architecturally rich, and do all this surgery so as not to disfigure the patient in any way?

“We’ve all been in Modernist buildings that have undergone a renovation that might meet the immediate needs of the users but does significant damage to the building itself.”

The building opened in 1977, three years after Kahn’s sudden death, to house the US collector and philanthropist Paul Mellon’s gift to Yale University of the most important collection of British art outside the UK.

Establishing a hierarchy The renovation was guided by a decade of research, compiled in a 2011 publication by Peter Inskip and Stephen Gee, which established a hierarchy of elements to be preserved and those that could be adapted.

“Conservation plans are stewardship documents, where you assess what is culturally important about a built structure,” says Amy Meyers, who commissioned the plan—the first of its kind in the US—from the London firm of Peter Inskip + Peter Jenkins Architects shortly after she became the centre’s director in 2002. The first conservation plan for a Modernist building was drawn up in 1993, for the Sydney Opera House.

By 2002, subtle alterations to Kahn’s building were accumulating. “Door handles had been taken off and put back upside down. A lift panel had been replaced with steel that didn’t really match the existing steel,” says Constance Clement, the centre’s deputy director, who heads the conservation committee.

Public spaces in the four-storey building are now glowing, with its grid of skylights bathing the top-floor painting galleries and two internal courtyards in natural light. The unstained wood panels that clad the entrance and library courts—faded after years of exposure to light—have been restored to their original honey-toned lustre. Discoloured Belgian linen on the gallery walls has been replaced, and worn or synthetic carpeting swapped for New Zealand wool. Natural materials are integral to the building’s aesthetic, Clement says. 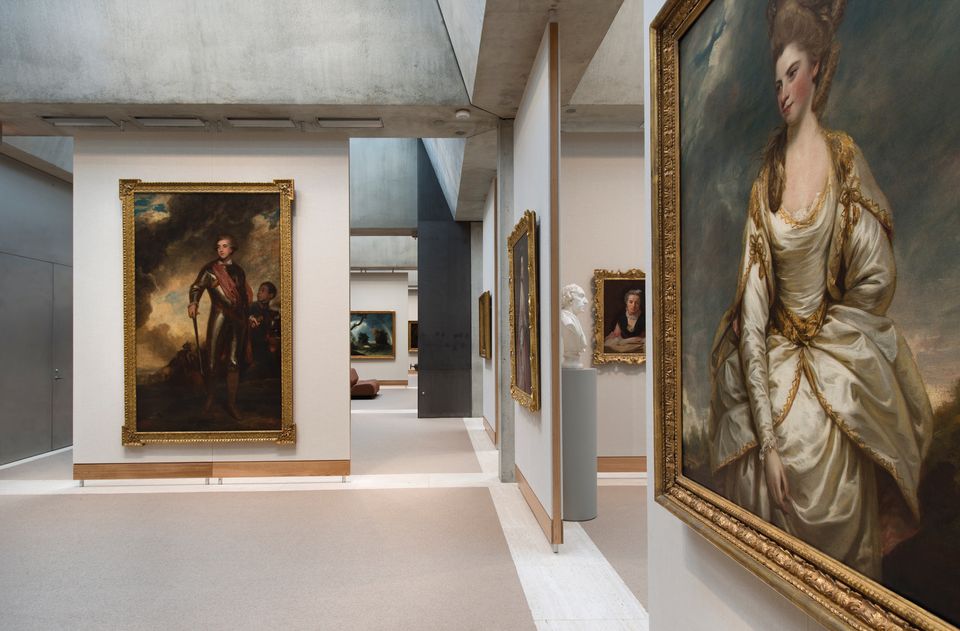 Partitions in the fourth-floor galleries have been raised off the floor, as Kahn envisaged. Photo courtesy of Yale Center for British Art

Continuity of space Fabric-covered partitions, used for hanging art and for subdividing the 20 sq. ft gallery bays, have been altered based on a late drawing by Kahn. Known as pogos, they are now elevated slightly off the floor, as if on pogo sticks, and their wood trim has been recessed so that they resemble floating screens.

“Raising the panels to match that 1974 drawing encourages the eye to investigate what’s beyond,” Knight says. “You can see light bouncing underneath. One of the hallmarks of this building is the continuity of space.”

The partitions have also been repositioned as part of the rehang of paintings by Turner, Constable, Hogarth and Stubbs, among others. “Using the pogos to come out from the walls to frame the view beyond is closer to the way the centre was originally used,” says Scott Wilcox, the centre’s deputy director for collections. His reinstallation is more dense than before, with around 500 works now on show, up from 300.

The pogos were removed in the Long Gallery, which has been restored to its original seven-bay open sweep and its function as a study centre. The works in each bay are hung salon-style, with a different theme—parents and children, gardens, horse-racing and hunting—and juxtaposed with recent acquisitions. The 21st-century portrait of the artist and poet Ian Hamilton Finlay by Eileen Hogan, for example, hangs next to 17th- and 18th-century works. Kahn flanked each end of the gallery with a glass-enclosed office, but these were not ranked as being of high cultural significance in the plan. One has been converted to a high-tech collections seminar room.

The centre will share the conservation plan on its website. “We want it to be a kind of guidepost for other institutions,” Meyers says. Inskip and Gee are drawing up a plan for the Salk Institute, Kahn’s 1965 masterpiece in San Diego, California, as part of the Getty Conservation Institute’s Modern buildings initiative.

Meyers says the Yale centre’s plan will continue to be updated. “We’re going to maintain the building and keep it in the best of health, just like any art object,” she says.