A brush with... Chantal Joffe

An in-depth podcast conversation on the painter’s big influences, from Chaim Soutine to Anne Sexton In this episode of The Art Newspaper's new podcast, Ben Luke talks to Chantal Joffe about her cultural experiences and their effect on her work and life. She shares her obsession with the lives of the poets Anne Sexton and Robert Lowell; the difficulties of painting her daughter; and how she reacts to attending her own exhibitions.

Joffe was born in 1969 in Vermont and moved to London as a child. A graduate of two significant centres of painting in the late 1980s—the Glasgow School of Art and the Royal College of Art in London—her distinctive work was spotted at the New Contemporaries exhibition by the dealer Victoria Miro, who still represents her today. Much of her artistic focus was, and continues to be, on found imagery and people: children, fashion models and images found in pornographic magazines.

Her work—in its use of expressive marks, vigorous colour and raw, crude surfaces—is definitively painterly. As Joffe has matured, her bold-patterned paintings have become increasingly personal, often depicting her literary heroines such as Emily Dickinson and Emily Bronte, as well as her daughter Esme. In 2019, Joffe's career reached a watermark with two simultaneous solo shows at Victoria Miro's galleries in London, where she showed a series of unflinching self-portraits that she had made every single day for an entire year. Below you can find some of the topics discussed on the podcast. 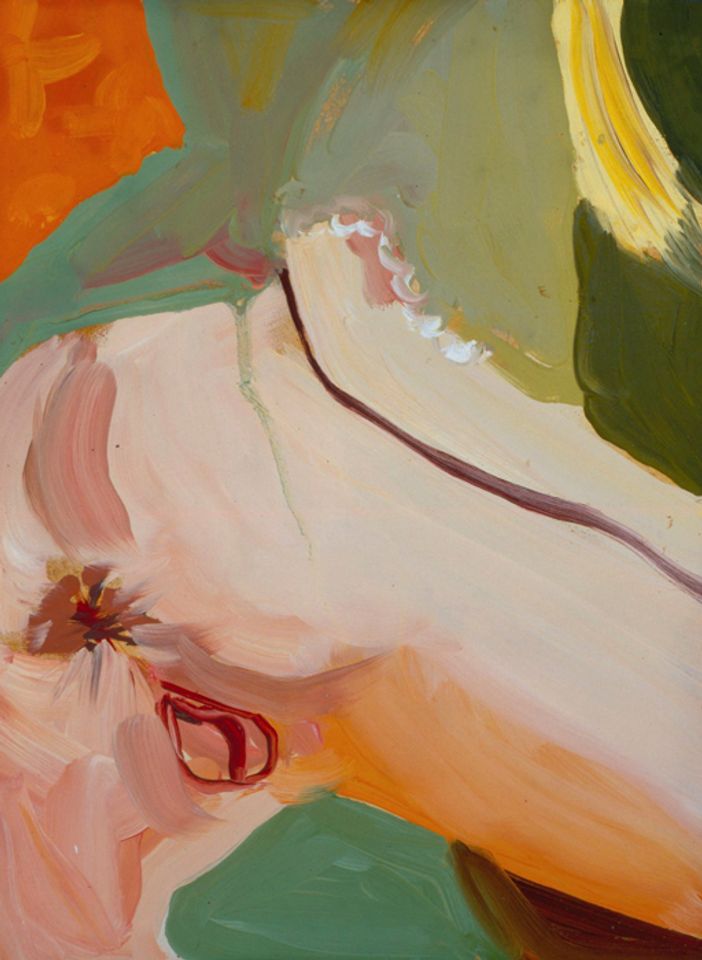 Chantal Joffe on... her painting process

"When I sit down paint, it's like immediately switching on a radio in my head. I can hear my own thoughts in a way that I can't without the brush in my hand [...] In a funny way, the actual image of what I'm painting is weirdly the least important thing. It's the access to the thoughts I’m after. I often think of it as like an addiction [...] I can only think when I'm painting. It's not always words it's also shapes and ideas. And they are activated by the brush." 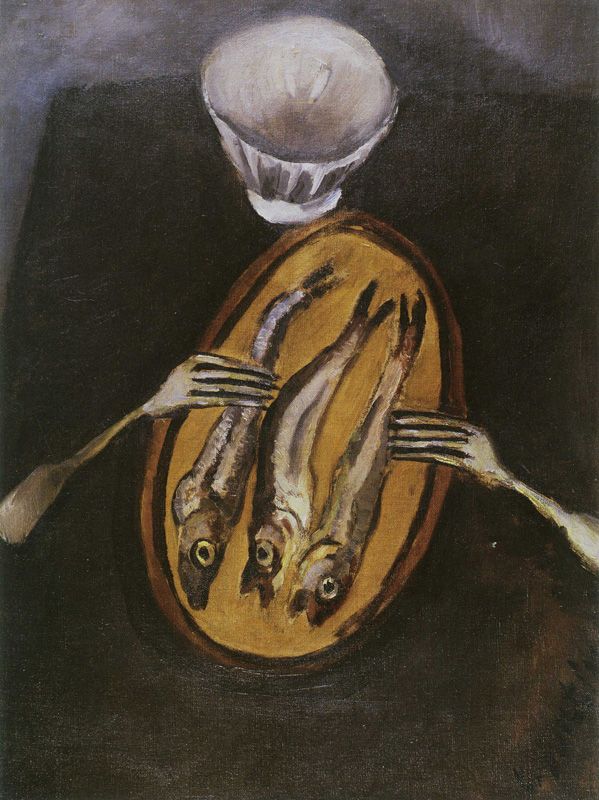 ... the first artist she loved

"I saw Soutine's [Still Life with Herrings] on my foundation course and I remember it had this quivering kind of emotion. He's never tried to make his work real. Rather it's his version of real. There's no "the head will be big" or the like. There was a group of his works at Courtauld [Gallery in London] recently of hotel people and waitresses. There was a boy with red cheeks and nose turned up and they were all so utterly real without ever being photographic. They have this incredible amount of speed and energy in the line. It's funny, when you're in a museum somewhere abroad and you're walking through. They always just jump out at you, don't they? They're small his paintings, but they jump out." 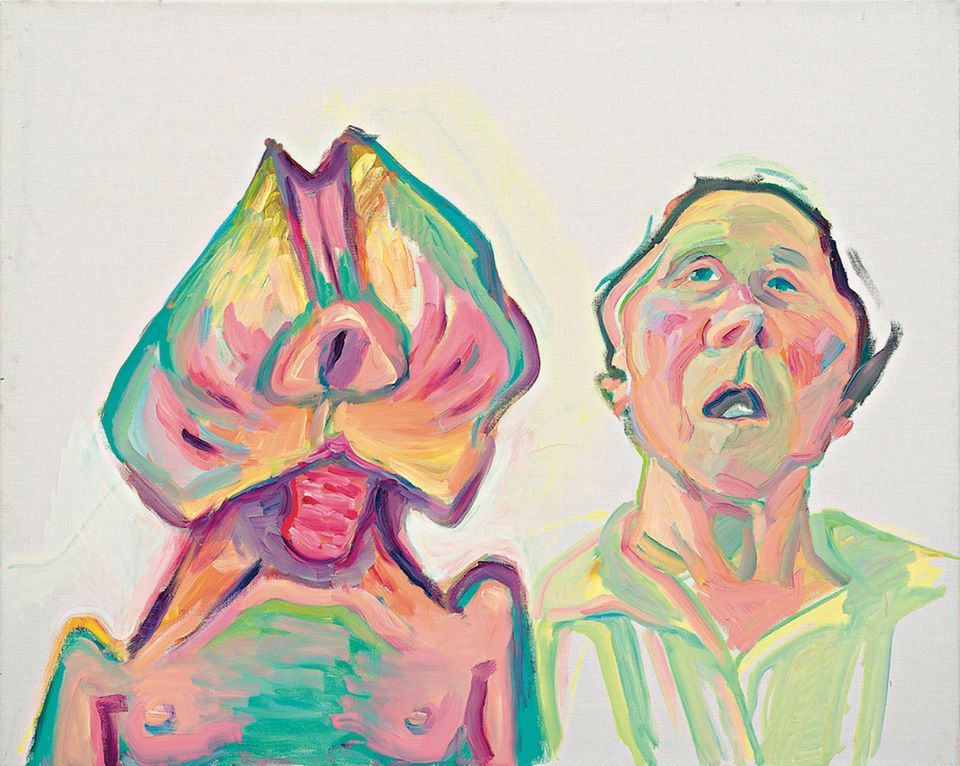 "There was a show of hers and Francis Bacon at Tate Liverpool that had a huge impact on me; her willingness to be ugly and show ugliness. To paint herself in the most raw, open way, in hospital, old, naked and angry. It's so unapologetic." 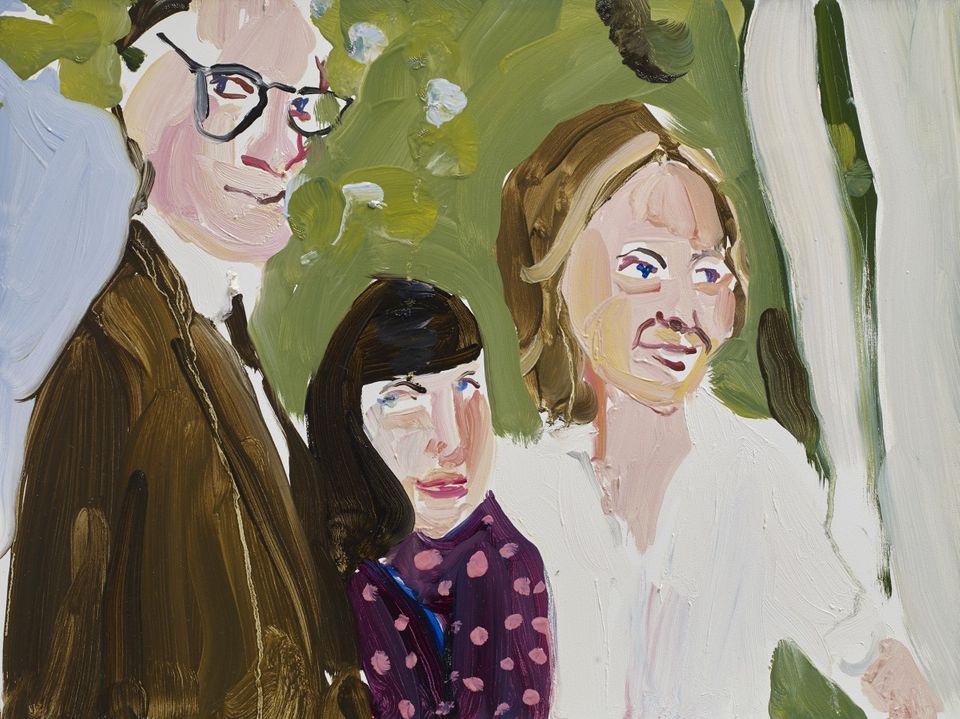 "I have this kind of obsession with the lives of Robert Lowell, Anne Sexton [...] the way they all overlap [...] I'll read the letters of Lowell to Elizabeth Bishop, and then the letters of Lowell to Blackwood and Elizabeth Hardwick. I want to be chatting to them, I want to be with them. I want them to exist like they're real for me. I think that's why I'm obsessed with memoirs and biographies. I think Olivia Laing is incredible for that reason. She somehow conjured that in her books like The Lonely City (2016), she sort of brings them all back to life. In a way that's what I'm trying to do when I paint them." 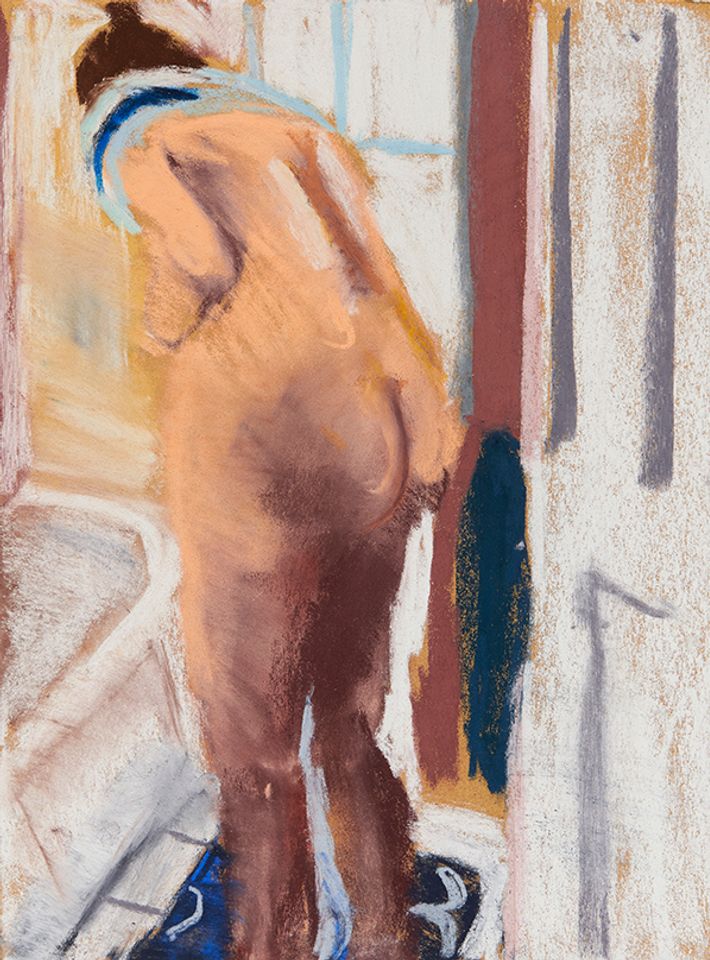 ... on breaking her painterly habits

"You can lapse into habits [...] how you mix a blue or a green or do brown hair [...] Degas always said to find a different solution to the question. That's why pastel is so exciting to me. I like the violence with which you draw with pastel or oil sticks. They're incredibly physical and that to me is quite important." 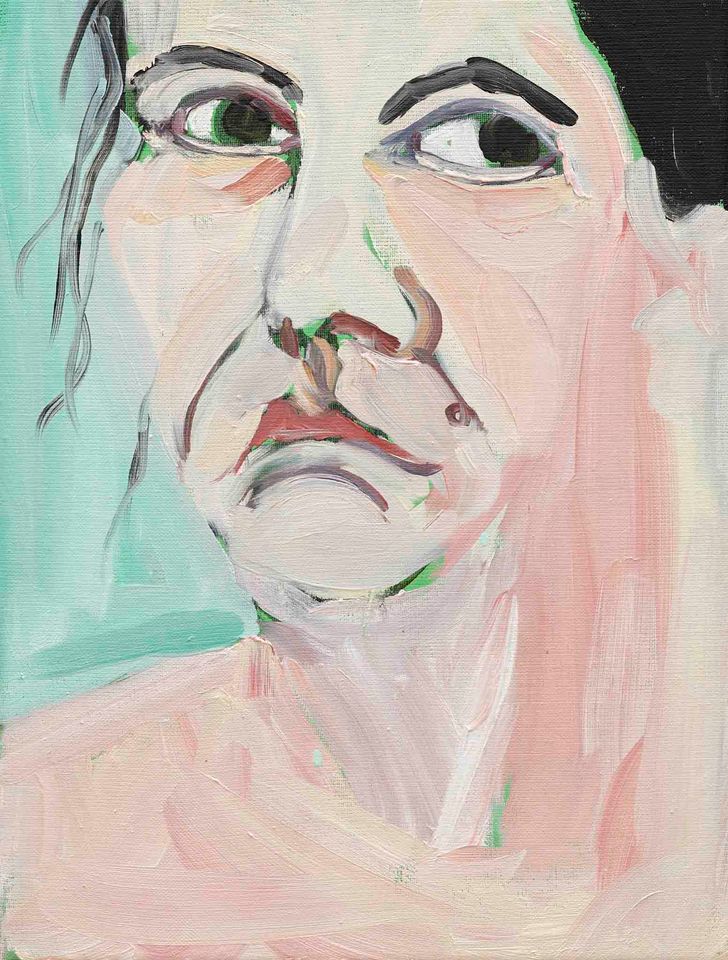 Self portrait October 1 The artist and Victoria Miro

"In art there's always that bit where what I'm doing feels like the most incredible, exciting thing I've ever done, like it's gonna be like this forever. And then suddenly, one day it’s gone, it’s dead and you suddenly have to move on... It's like you're running down this road and then you hit a wall, so you have to find another road. I think everybody has that. But these pictures were a lifeline that I really needed at the time. They didn't take long, maybe an hour to paint each one. But that was enough to have done in the day, that literally was enough. I allowed myself that, it felt good that I had achieved that." 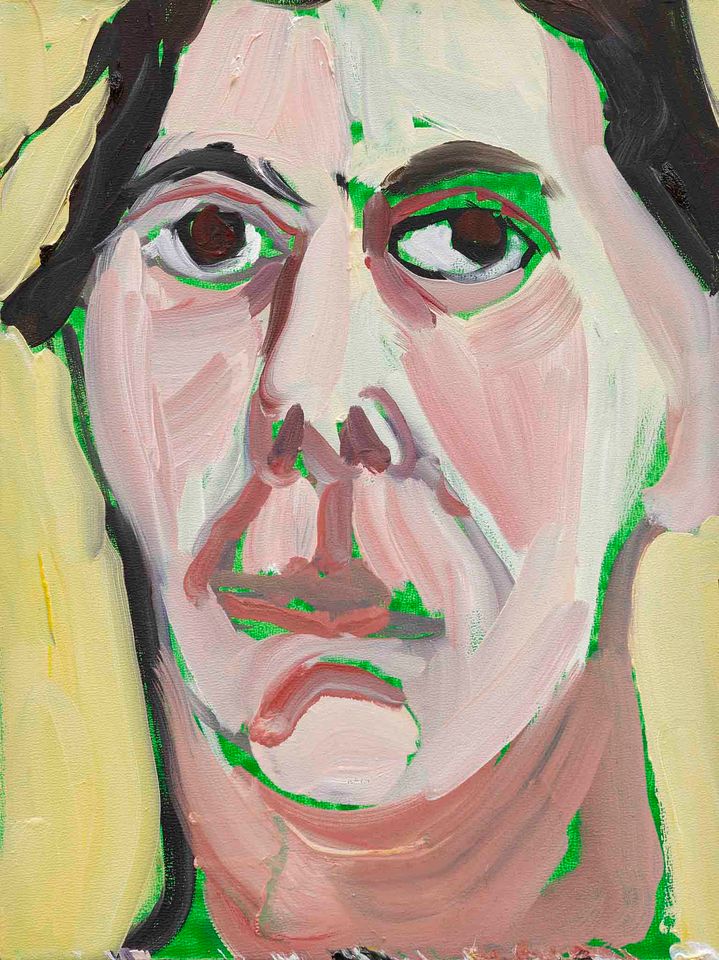 Self Portrait August IV The artist and Victoria Miro

... and seeing them exhibited

"Often when I'm in the exhibition I'm completely disassociating. People kept coming up to me and going: 'Wow. You're not as ugly as you made yourself!', which always feels completely irrelevant and pointless... The whole experience of the show is always so fraught and you're so naked in every sense that I'm not sure made any difference. I didn't think it made it better or worse. It's always just the same horror." 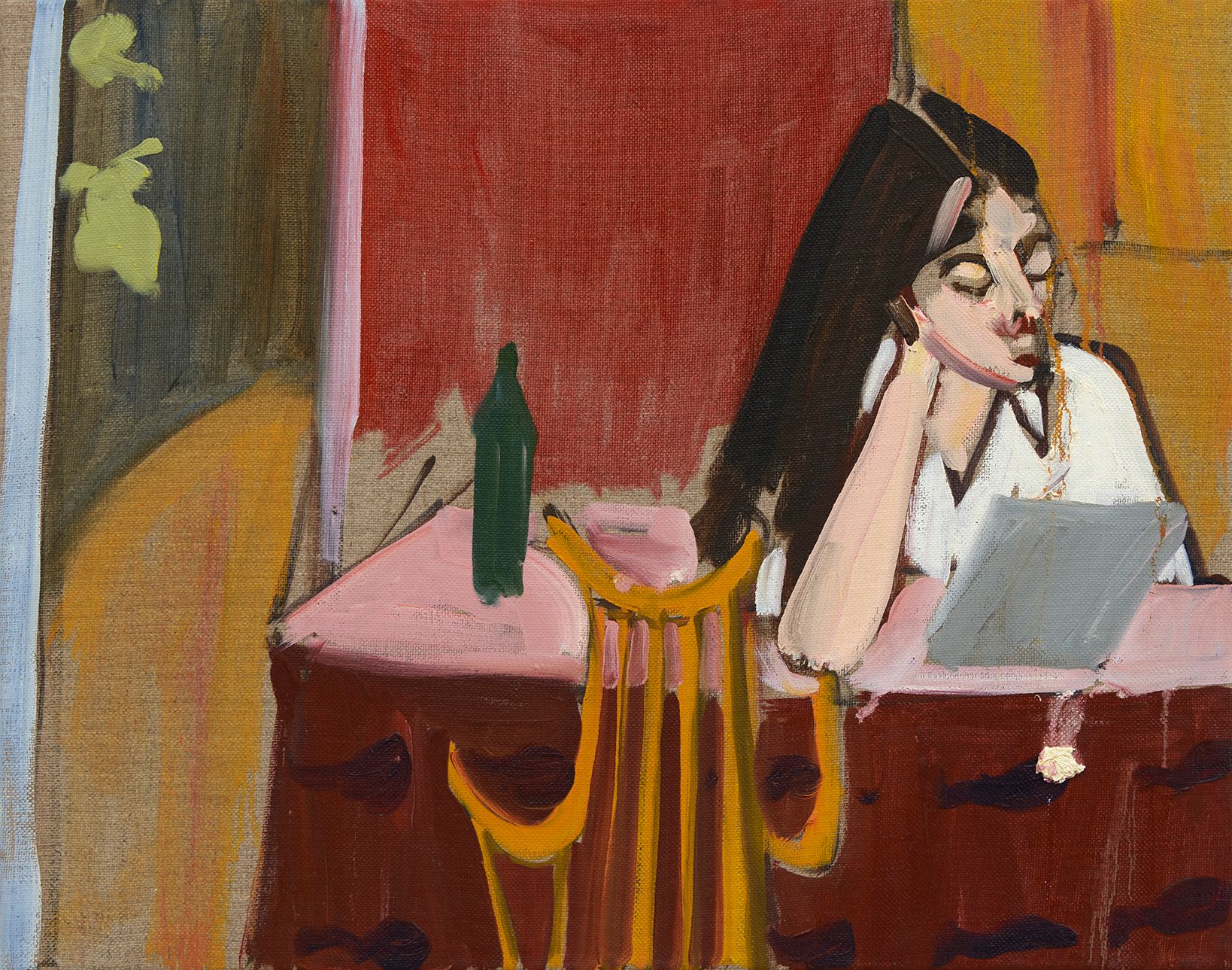 "I think the reason we love art so much is that you see the world through somebody else's eyes. We're there. We're literally there. Time is changed by the whole experience, whoever's art it is we're inside them. To go back to the poets, I'm trying to climb inside them, because we're so trapped in our own selves. It lets us crawl outside ourselves for a minute."

about 14 hours ago
'Cranach' painting of Venus at centre of Old Masters fakes scandal must be returned to Prince of Liechtenstein, court rules