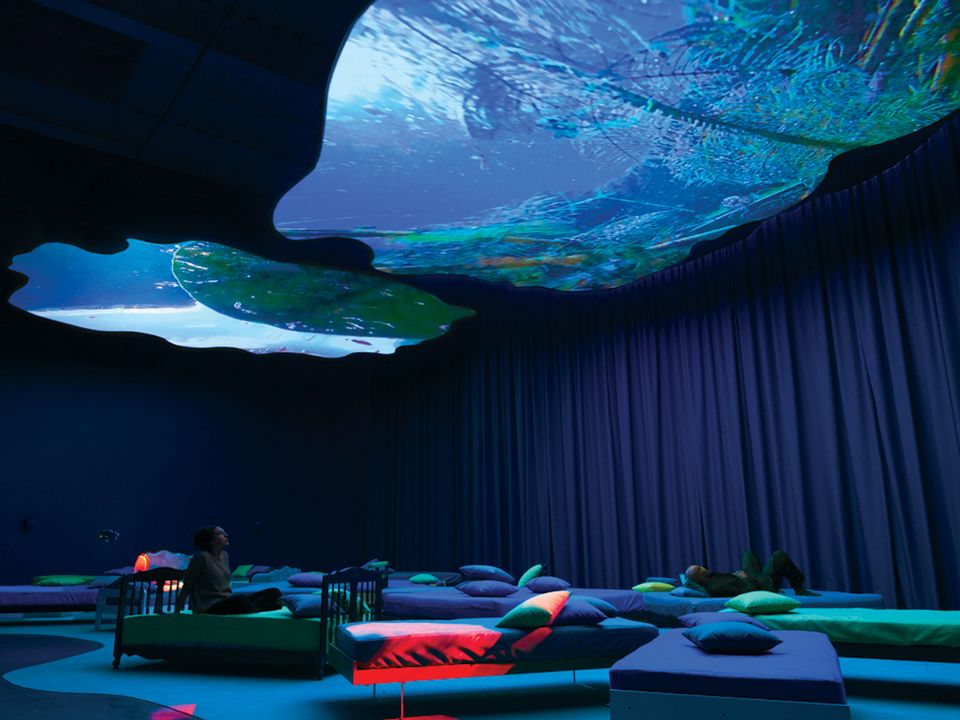 New York’s New Museum has big shoes to fill. Or, more precisely, a big building to fill, as it stages a show in the cavernous former office building at 180 the Strand, where, two years ago, the Hayward Gallery held its popular video-art exhibition Infinite Mix.

One of the most striking works in that show was Kahlil Joseph’s film installation m.A.A.d. (2014), which was soundtracked by the hip hop star Kendrick Lamar. For Massimiliano Gioni, the New Museum’s artistic director and the curator of Strange Days: Memories of the Future, it was precisely this artist that proved to be a catalyst for this new show.

The exhibition is “constructed around some of the atmosphere that Joseph evoked [in Fly Paper],” Gioni says of the video installation coproduced with the Vinyl Factory (who invited the New Museum). “The work is a kind of diary piece that talks about his own father, his memories [and is] inspired by Chris Marker in the sense of that first-person narrative, which is both confessional and fictional,” he says. “And it became a thread that weaves in and out of the exhibition.”

Video installations by 21 artists spanning ten years of New Museum shows fill the building. Joseph’s film is joined by works by some of today’s most cutting-edge artists, including the British artist Ed Atkins, the US artist Wu Tsang and the French artist Camille Henrot to name a few.

Henrot’s masterpiece Grosse Fatigue (2013), which first made a splash at the Venice Biennale five years ago, was also organised by Gioni. “It’s a kind of talismanic piece”, he jokes. Although this will not be the first time that Henrot’s work is shown in the capital, other works in the show are having their London debuts, including Jonathas de Andrade’s O peixe [the fish] (2016), Pipilotti Rist’s 4th Floor To Mildness (2016) and Joseph’s Fly Paper (2017).

“More broadly, the show is about the combination of the personal and the documentary,” Gioni says. “Some works have more to do with sentimental documentary or lyrical reportage, like [the works by] John Akomfrah and Jonathas de Andrade.” In Andrade’s O peixe, fishermen in a coastal village in Brazil hold large fish they caught to their chests until they stop breathing—seemingly an account of a bizarre ritual that is in fact fictional.

“Other [artists in the show] are maybe more interested in a new type of [film-making]: Neon-realism,” Gioni explains, referring to the distinctive aesthetic present in many of the works by artists such as the Berlin-based Oliver Laric, Wu Tsang and US artist Ryan Trecartin. “Another term I use, borrowed from the literary critic James Wood, is hysterical realism,” he says.