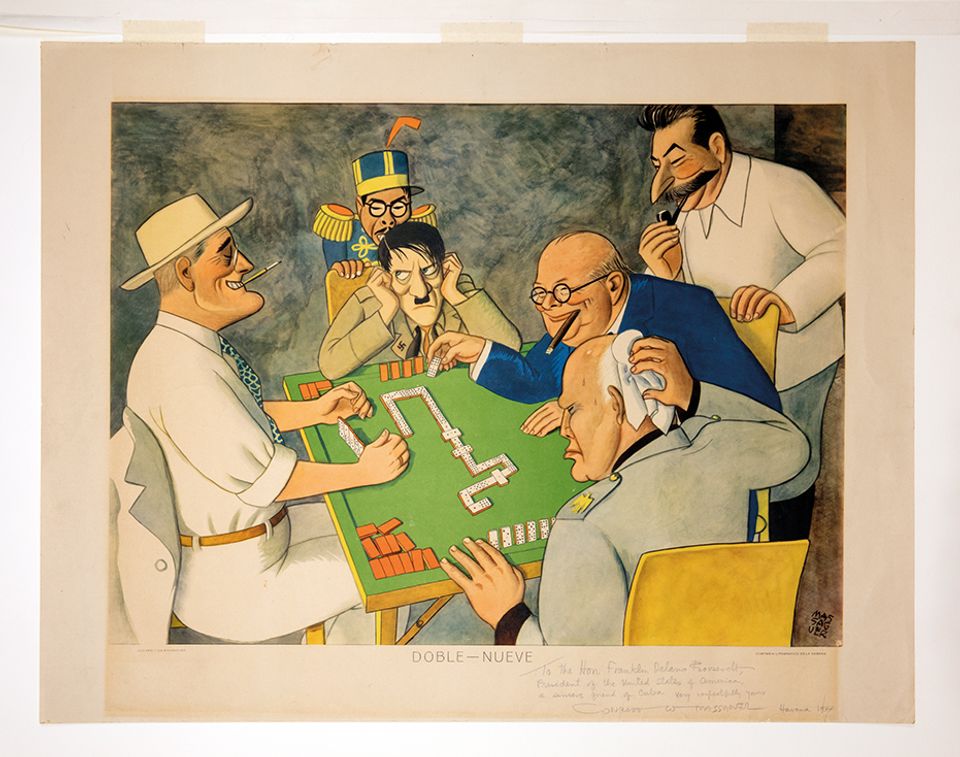 The Wolfsonian is celebrating the work and wit of the Cuban caricaturist and publisher Conrado Walter Massaguer (1889-1965) in an exhibition that seeks to revive interest in the illustrator as a cultural trendsetter and champion of Modernism.

Through the magazines Social and Carteles, which he published from the 1920s to the 1960s, Massaguer helped shape 20th-century Cuban culture by introducing Modernist aesthetics and ideas to his country. For example, he popularised the image of the flapper—a sexually liberated woman who was free to dance, drink and smoke. He also kept his audiences up to date on the latest news through his astute caricatures of political figures and celebrities.

“Caricature was especially important in Massaguer’s time,” says Frank Luca, the Wolfsonian’s chief librarian, who organised the show. Thanks to the rise of mass media, caricature became not only a popular art form but a shaper of popular opinion. “I would argue that caricatures of Hitler and Mussolini are more powerful than any photographs we have of them,” he says.

But practising this form of art came with risks, and Luca says it was especially difficult for Cuban artists: “It was a hard profession, even during the Republic.” In the late 1920s, one of Massaguer’s caricatures of the Cuban president Gerardo Machado landed him in hot water with the dictator and so he went into exile, first to Europe and then to New York. And Massaguer was not the only caricaturist to find himself on the wrong side of “thin-skinned politicos”, Luca says. Several of his contemporaries, including Ramón Arroyo Cisneros and Juan Eduardo David Posada, were either arrested or went into exile.

Massaguer made the most of his time in exile in the US, however. He became a sought-after illustrator for magazines such as Vanity Fair, Cosmopolitan and Collier’s, and his depictions of Cuban subjects in a 1931 exhibition was well received by US art critics. He eventually returned to Cuba where he continued to publish his magazines and worked to promote the island as a tourist destination.

The show, which is largely drawn from pieces donated by the collector and historian Vicki Gold Levi, brings together more than 100 magazine covers, caricatures, adverts, paintings, sketches and letters produced during Massaguer’s 40-year-career. Among the highlights is Double Nine: Allied Teamwork Wins the Game, on loan from the Franklin D Roosevelt Presidential Library and Museum. The 1940s drawing depicts Roosevelt and Churchill beating a somewhat confused Mussolini and a petulant Hitler at a rousing game of dominoes as Stalin and Hirohito look on. Also on display is a digitised version of a rare book of caricatures of Fidel Castro and his revolutionaries that Massaguer published shortly after the fall of Cuban president Fulgencio Batista in 1959. Ironically, the drawings depict Castro and his comrades consuming American staples such as Coca-Cola and Jello—products that would soon become proibido.

In conjunction with Cuban Caricature and Culture is the exhibition Caricaturas (until 26 January), a focused display of caricatures of celebrities and leaders such as Charlie Chaplin, Queen Elizabeth II and George Bernard Shaw drawn by Massaguer’s Cuban and Mexican contemporaries including Miguel Covarrubias and Xavier Cugat.

• Cuban Caricature and Culture: the Art of Massaguer, The Wolfsonian–Florida International University, until 1 March 2020