The Big Review—Tracey Emin/Edvard Munch: The Loneliness of the Soul 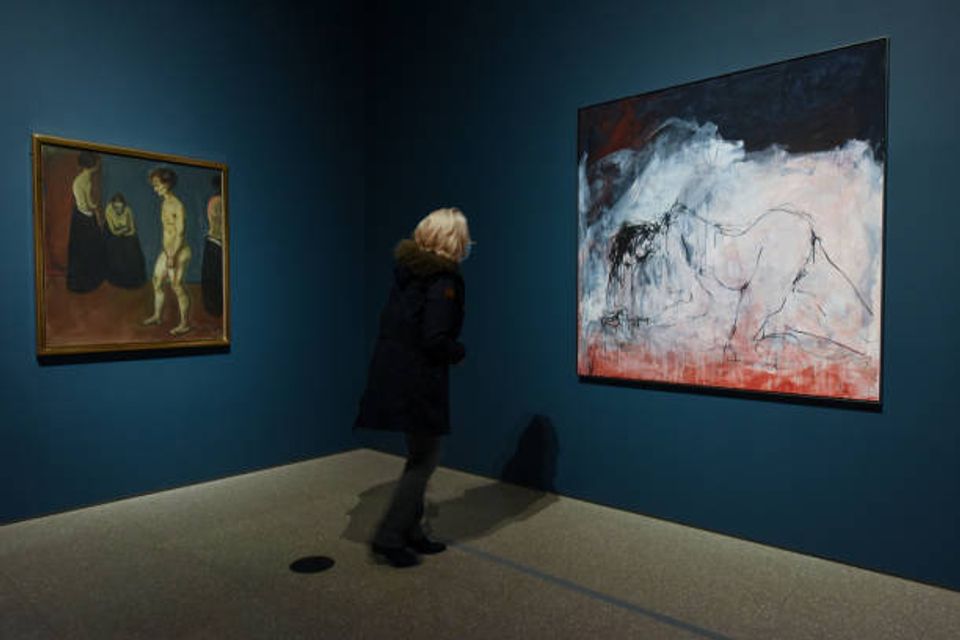 Many of the works in the show have been hung together to demonstrate their structural similarities, such as Emin’s Black Cat (2008) and Munch’s The Death of Marat II (1907) © Nicky J Sims/Getty Images

As an MA student at the Royal College of Art in 1989, Tracey Emin carried all of the paintings she could from her studio and smashed them to smithereens with a sledgehammer in the college courtyard—before throwing what was left into a skip. The mangled canvases formed part of what she has since called, only half in jest, her “Byzantine-Fresco-Munch” series. Unapologetically indebted to Edvard Munch, these formative works directly address the artist born exactly a century before her, who shared her obsessive compulsion to plot the precarious terrain of psychic life.

“I needed to make this massive, intellectual leap with my work,” Emin reflected recently on the self-annihilation of 1989, “and I wasn’t saying that I wanted to leave behind what I loved, but I wanted the alchemy, I wanted it to transform.” Over the last decade, Emin has made a return to painting, summoning new life to these old losses, with work that once again channels the emotional temperature of the melancholic Norwegian. But is it worth the wait?

Tracey Emin/Edvard Munch: The Loneliness of the Soul is a heart-rending duet between two of Modern art’s great confessionalists. Emin was offered carte blanche from the Munch Museet in Oslo (now known as MUNCH, where the exhibition will travel in the summer): she settled on 19 oils and watercolours married with more than 25 works of her own, across painting, neon and sculpture. Ever since she picked up a book on European Expressionism as a wayward 15-year-old in Margate, Emin has recognised Munch as a “friend in art”, capable of a radical vulnerability that male artists rarely acknowledge today.

We are persuaded of their shared fascination with interior life, what Munch called “sjaelemaleri” or “soul painting”, early on. Next to the introductory text are two insomniac selfies by the artists, who greet visitors with haggard eyes and contorted bodies ill at ease on unmade beds. All-too-intimate scenes such as these are the overwhelming content of the paintings across the three following rooms, and the artists themselves are often their own subject. “There should be no more paintings of interiors,” wrote Munch in his St. Cloud Manifesto of 1889, without “living people who breathe and feel and suffer and love”.

The question is therefore not why Emin and Munch, but why this Emin with this Munch? Sponsored by Emin’s three galleries in London, Brussels and Rome, and partly overlapping with commercial displays at each, the Royal Academy (RA) show focuses on her stylistic revisions of the female nude, of the kind that were exhibited at White Cube Bermondsey in 2019. These are paired with a selection of Munch’s, which are hardly knockout—there are no self-portraits, nothing from The Frieze of Life (let alone The Scream), and no graphic works, which are widely considered to be Munch’s most significant art-historical legacy.

Many of the Munchs were clearly chosen for their formal correspondence with Emin’s contorted bodies. The angular lines of the spatchcocked crotch and left leg in Devoured by you (2014) is mirrored in Munch’s Sitting Nude, Morning (1922-25) hanging opposite, a tender study in the blurry-eyed ache of waking up with someone you don’t love. The harrowing Every part of me Kept Loving You (2018), Emin’s gut-wrenching mass of haematological pigment concentrated in the figure’s face, sits between two standing nudes by Munch: one a broken woman weeping crimson; another with a face so abstract it looks mutilated beyond recognition.

“There is no doubting how profound an experience selecting the show was for Emin, rummaging through the archive of her favourite artist”

There is no doubting how profound an experience selecting the show was for Emin, rummaging through the archive of her favourite artist; she has described a “transmission of substance” after visiting the Munch Museum and seeing his bed. Visitors to the RA are denied the same transformational experience with Emin’s most famous and controversial work, My Bed (1998). Also conspicuous in its absence is Homage to Edvard Munch and All My Dead Children (1998), the Super 8 film in which Emin crouches in a foetal position at the end of a jetty on Oslofjord and screams with the tormented abandon of Munch’s best-known work. Emin has instead curated a far more streamlined corpus of work that finds companionship—more subtly, more maturely—with the domestic Munch who stalks the bohemian’s stripped-back bedroom.

In The Death of Marat II (1907), the figure of Charlotte Corday, murderer of the titular French revolutionary and here unmistakably modelled on Munch’s one-time fiancée Mathilde ‘Tulla’ Larsen, squares up to us with Munch himself strewn behind as the martyr Marat with a red right hand. The artist maintains the horizontal-vertical axis of Jacques-Louis David’s The Death of Marat (1793) but transforms the picture plane into a cross-hatched cacophony of wincingly brilliant pigment.

This scene wasn’t far from the truth: after the latest in a series of arguments that became violent in 1902, Munch was shot in Larsen’s bedroom. His hand became the subject of one of the very first medical x-ray photographs and captured the image of the bullet. In the RA’s press materials, Emin has made much of Munch as a sophisticated “man of the 20th century” who was one of the first people to have a car and a telephone. A modern man, perhaps, but one who struggled to cope with modern women.

Emin and Munch both gravitated towards like-minded enfants terribles in moralistic societies whose press and establishment relished being scandalised by their art—until they were later cautiously accepted as national treasures. In Kristiania (present-day Oslo), the young and untrained Munch was a disciple of the anarchist philosopher Hans Jæger, who courted widespread controversy and was imprisoned for infringement of public morals. Language is central to the practice of both artists, and the first of Jæger’s Nine Bohemian Commandments (1889)—“Thou shalt write thine own life”—is as much a doctrine of faith for Emin and her generation of Young British Artists as it was for Munch.

Up close, it is Emin the poet and accomplished author of autofiction—an often overlooked yet indivisible part of her practice—and less Emin the painter, who captivates. (The less said the better about the sculptural contributions: in the second room, three white-patina bronzes from 2013 sit on top of plinths that resemble slabs of iced Christmas cake with terrible ornaments on top). “Sometimes titles are really important,” Emin once said, “but sometimes they’re not.” At the RA, Emin’s works are squarely in the former camp, as the “I” lyricises across time and space these depictions of mourning, distress and trauma to “you” in works like You were here like the ground underneath my feet (2018) and I Became Your World (2015-17).

In Ruined (2007), Emin scrawls a Twombly-esque gesture, writing “TIN” thinly at the top of the canvas. It was originally meant to spell ‘TINY’, one of Emin’s best-loved words and the name she gave to her unborn child, but the artist rightly abandoned that idea three-quarters of the way through because there’s nothing diminutive here. These paintings could never be scaled down. In the hinterland below, there is the figure of a woman with a cavernous vagina in a sublimated composition somewhere between Gustave Courbet’s The Origin of the World (1866) and a crime scene. The cold metal of “TIN” jars with the bare skin and calls to mind Emin’s personal struggles: the childhood rape, the abortion at 31 (which is also the procedural subject of Pelvis High, 2007), the cancer that earlier this year led to the removal of parts of her genitals and reproductive system.

But like all good poets, Emin’s works extend beyond mere biography. As Munch knew all too well before her, personal suffering will only carry an artist so far; the alchemy happens in the forging of those stories into narratives to which we might all relate. If there is anything that is transmuted from those decimated Royal College paintings, it is surely that.

• Tracey Emin/Edvard Munch: The Loneliness of the Soul, curated by Kari Brandtzæg and Edith Devaney, Royal Academy of Arts, London. The show is currently closed due to coronavirus restrictions but is scheduled to run until 28 February.

• Matthew Holman is a poet and critic. He teaches English at University College London and Queen Mary University of London