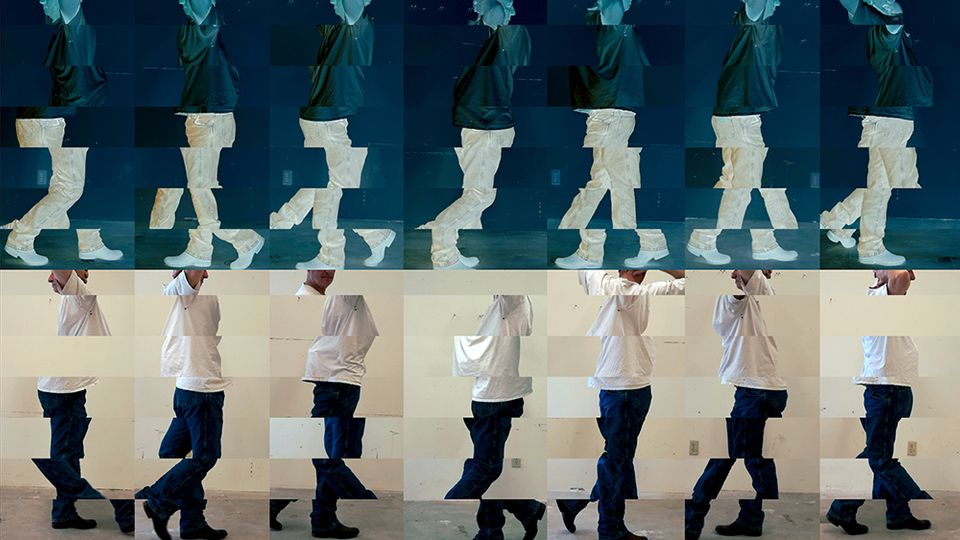 “Bruce Nauman: Disappearing Acts” at the Museum of Modern Art and its auxiliary space PS1, a short subway ride away, probably encompasses much of what makes contemporary art unintelligible or distasteful to a wide, unpredisposed public.

Nauman's refusal or incapacity to settle into a signature style or medium, and his work's pressing moodiness and apparent indifference to spectators' patience, curiosity or bafflement must make it repugnant to today's mass museum audience. That MoMA's survey proposes Nauman as the most influential artist of his generation–he is 76–surely provokes puzzlement, even resentment among countless visitors.

Or so one would think.

But going through the rangy retrospective, I witnessed a full spectrum of responses among the people who thronged PS1–which accommodates the bulk of the survey–from grimaces, dismissive smirks and uneasy laughter to the sort of leisurely absorption that Nauman seems neither to solicit nor anticipate.

In her catalogue essay, the exhibition's lead curator, Kathy Halbreich, notes a corresponding division in the critical reception of Nauman's work. “Some critics”, she writes, “see only disconnected series of obtuse provocations and narcissistically driven transgressions masquerading as sculpture. For admirers who relish the experimentation” that “permeates all phases of his 50-year career, however, these lapses actually manifest the fullness of Nauman's inventiveness.”

Nauman's quandaries as a young man, isolated in his studio, concerning what makes an idea, an act or an object art seem in retrospect to have manifested larger cultural anxieties that have never really abated. Can slight, intangible or ephemeral works of art betoken meaningful values? How communicative must works of art be? How distinct, if at all, are they from the ideas or actions that produces them?

Nauman started from his visible self and worked outward with such oddities as the forensically titled “Collection of Various Flexible Materials Separated by Layers of Grease with Holes the Size of My Waist and Wrists” (1966), the video “Dance or Exercise on the Perimeter of a Square (Square Dance)” (1967-68), which seems to forecast a mania for exercise videos, and unique drawings such as “Projection of the Surface of My Hand” (1967), from which Tim Hawkinson seems to have learned.

Nauman also worked inward, as in “Get Out of My Mind, Get Out of This Room” (1968), a sound piece that takes literally the notion of mentality as private space, and neon signs such as “My Last Name Exaggerated Fourteen Times Vertically” (1967), whose stylization we might see as broadcasting an inner desperation to become and persist as “a name”.

The range of spectator response I witnessed reflects not only the zigzag course of Nauman's development–if that word applies–but the way that his work, especially in a retrospective, tends to re-pattern itself in viewers' memories and magnetise their personal associations.

For example, my memory threaded together the tedious 1999 video of Nauman drilling fencepost holes on his New Mexico ranch, a punningly titled late 60s photo of upright bits drilled sequentially into a wood block (“Drill Team”), slang for a boxer's loss of balance to a stunning blow (“stepping in post-holes”) and the analogous experience that I had descending Nauman's late-90s site-specific piece at Oliver Ranch in Northern California: a cast concrete staircase that runs with no railing down a steep hillside, in which the measure of treads and risers varies continually, obedient to the terrain's changing slope. At every step, danger beckons in the persistent temptation to enjoy the lush view across the valley below.

“Awareness takes time and is never simple; it is an unnamed medium of Nauman's oeuvre,” Halbreich remarks astutely, “and its use, being so tied to living a sentient life of understanding, offers the possibility that the artist may be a realist at heart.”

Anyone who has walked that irreproducible staircase piece will feel somatic echoes of it while watching Nauman's grand “Contrapposto Studies, i through vii” (2015-16) at PS1. In these wall-filling color video projections, Nauman walks back and forth, hands behind his head like a suspect at gunpoint, pivoting at the end of each passage. Video editing breaks his gait in various “Studies” at the knees, waist, torso or shoulders, or all at once, evoking impairments one moment and contortionist feats the next. Never has a Nauman performance looked more Chaplinesque, yet the pieces also evoke actual challenges to balance that the artist experienced after treatment for cancer. (Readers of Dante may think of “Inferno” canto XX, where diviners and fortune tellers appear with heads reversed upon their bodies.) Several of the “Studies” run with a second tier above (or adjacent) in negative, producing a sort of night-and-day, or living and ghostly, counterpoint.

As spectacle, nothing in the show tops “Contrapposto Split” (2017), in which Nauman, pacing his studio toward and away from the camera, in contrast to the processional “Studies,” seems to split in half, legs and torso going in and out of phase, edging the dread of “coming apart” psychically toward that of breakage of body from soul. The piece, viewed through 3D glasses, owes some its power to new technology that yields illusions of startling immediacy.

Even visitors unfamiliar with Nauman's art may note the connection between the “Contrapposto Studies” and the 1968 video “Walk with Contrapposto”, with its rough reference to the art historical cliché that views the hipshot in archaic Greek sculpture as a breakthrough in the depiction of humanity.

Perhaps only a visitor familiar with American art of the 1960s will see in Nauman's video “Green Horses” (1988) a rejoinder to Robert Morris's 1969 performance “Pace and Progress”, in which he rode a sequence of horses back and forth to exhaust them (and himself), wearing a long rut in the turf. Nauman's horsemanship reflects more upon skillful behaviour, as much of his art does (see the comic 1996 sculpture “All Thumbs”), and the difficulty and privilege of collaborative performance–in this case with non-human partners. Here the inversion of the projected image, undoing the brain's way with retinal impressions, plus the synchronous sounds of hoofbeats, gradually unsettles a viewer's comfort with gravity–another cardinal value of much 60s American sculpture.

Visitors lucky enough to have seen “Mapping the Studio I (Fat Chance John Cage)” (2001), a projected seven-channel video of Nauman's studio under nighttime surveillance, in its first New York presentation may share my disappointment here in “Mapping the Studio II with color shift, flip, flop & flipflop (Fat Chance John Cage)” (2001), whose very title hints at the ruinous overworking to which Nauman subjected it.

The artist's 1994 retrospective, which Halbreich, then director of the Walker Art Center in Minneapolis, co-curated, was at MoMA a much noisier affair than “Disappearing Acts”. It exploited sound bleed for exciting effects that its audience surprisingly seemed to welcome. In both of its New York venues, the current survey is quieter, though it includes some of the same works. Loud pieces such as the video ensemble “Clown Torture” (1987), which has gained intensity with the current pop cultural fixation on demonic clowns and with memories of Iraq war scandals, are fairly well isolated.

The quieter ambience adds to the power of soundless works, including drawings and emphatically mute sculptures as diverse as “From Hand to Mouth” (1967), “Seven Virtues/Seven Vices” (1983-84) and slapstick neon works such as “Sex and Death by Murder and Suicide” (1985) and “Seven Figures” (also 1985).

The relatively low noise level also adds to the impact of a work such as “Carousel (Stainless Steel Version)” (1988). Here a motorised structure rotates endlessly, with taxidermist's forms–vaguely pathetic readymade animal sculptures–hanging from its four arms, producing circles on the floor and excruciating sounds as they drag. Beyond chiming with Nauman's many evocations of indignity and death–note the number of severed heads in the show–the work brought to mind Jacob Needleman's thought of “the trails of unimaginable anguish carved out in space by our orbiting planet of war”.

To my surprise, I miss in “Disappearing Acts” some of Nauman's more hectoring or self-punishing video works, such as the mime piece “Shit in Your Hat–Head on a Chair" (1990), “Work Work” (1994) and “Thank You Thank You” (1992), which originated as a gift to the scholar and collector Ydessa Hendeles.

The ambiguously authoritarian tone of such pieces might have intensified the sense of Nauman as “always present tense”, as Halbreich said in an e-mail.

But whatever the demonstrable force of Nauman's influence–Rachel Whiteread's whole career seems traceable to his “A Cast of the Space Under My Chair” (1965-68)–no other visual artist working today seems more viscerally alive than he is to what Tennessee Williams called “the tragicomedy of human confusion”. 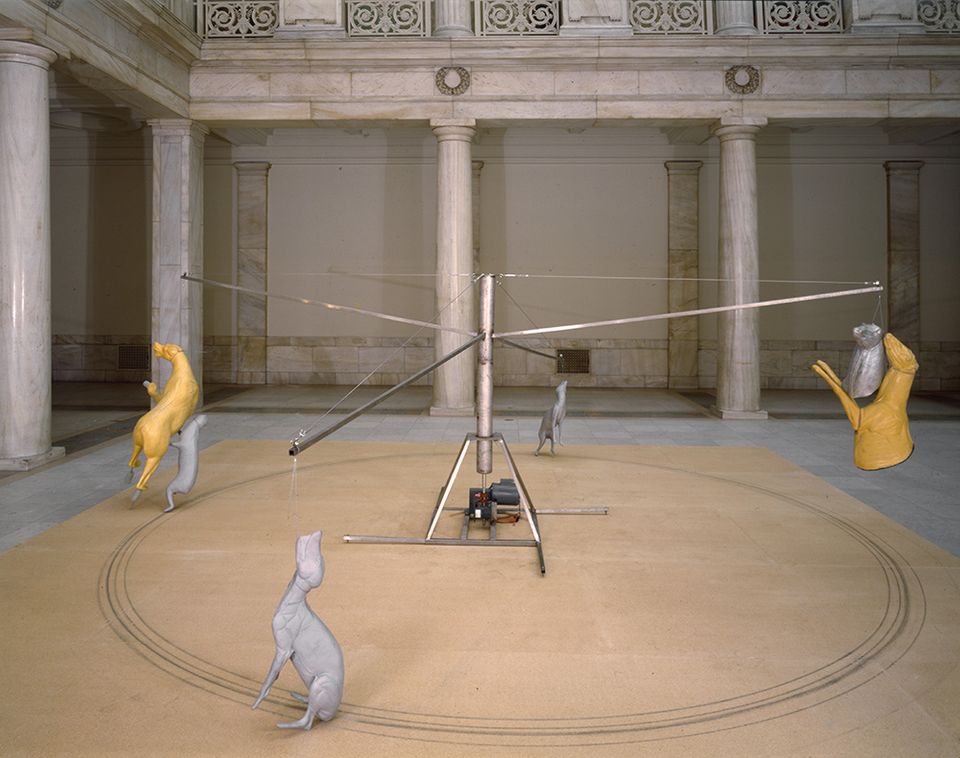