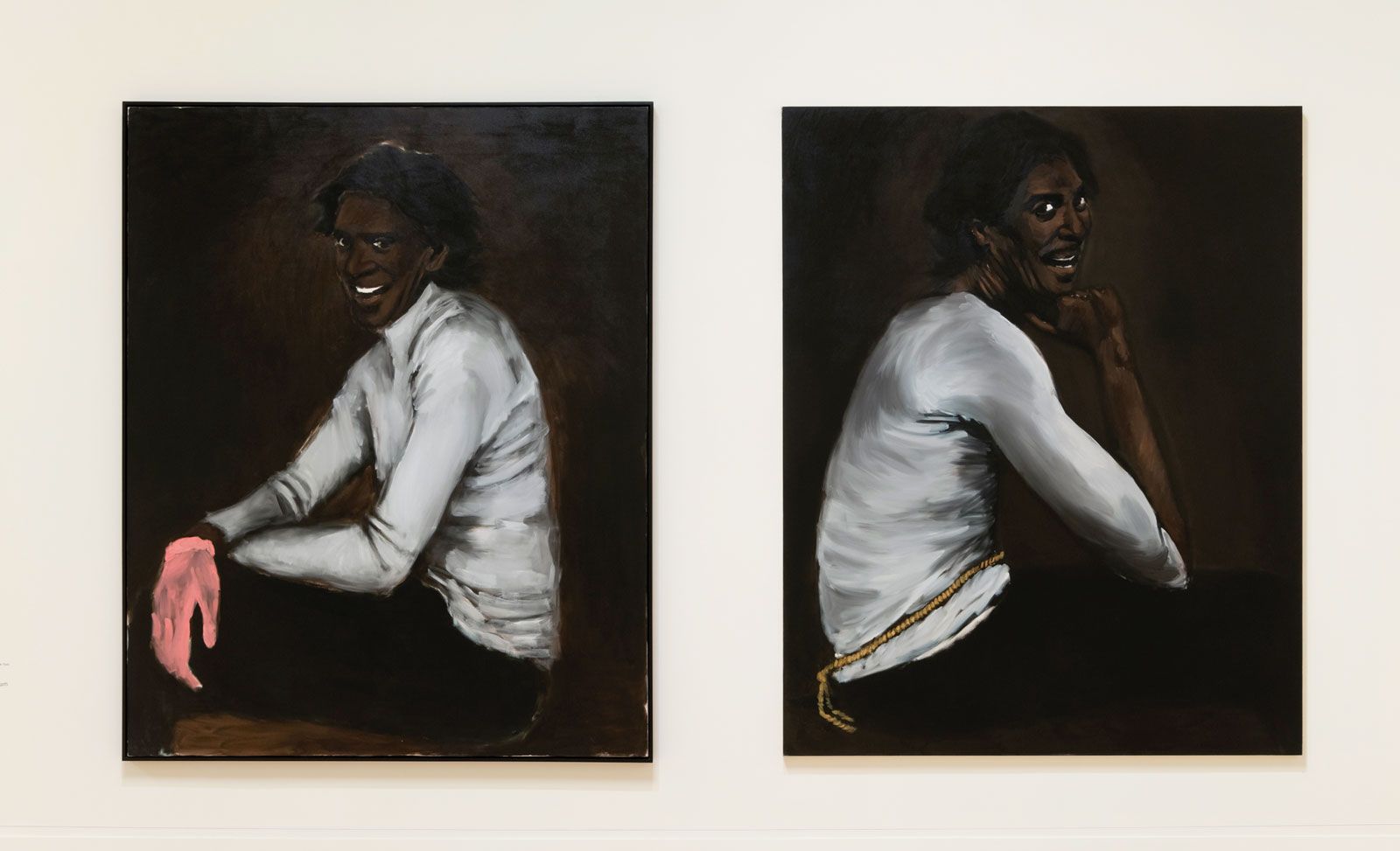 Wrist Action (2010) and Bound Over To Keep The Faith (2012) by Lynette Yiadom-Boakye at Tate Britain Photo: Tate (Seraphina Neville)

Lynette Yiadom-Boakye: Fly in League with the Night, Tate Britain, until 9 May 2021

Lynette Yiadom-Boakye’s mid-career survey at Tate Britain has an accompanying Spotify soundtrack that has been specially compiled by the artist as well as a short reading list of books that inspired her, both of which are available just outside the show. But it is the quiet and pared-back space inside the exhibition, with no explanatory wall texts and a generous hang with plenty of space between Yiadom-Boakye’s figurative paintings, that makes it a pleasure to visit.

Yiadom-Boakye almost exclusively paints Black figures, which are not portraits of real people, but instead composite characters created from found images, photographs, drawings and her imagination. The figures often exist in spaces that are hard to pinpoint and her titles add to the enigmatic quality to the works, something that is only accentuated the more you look at them according to the show’s curator. And while the exhibition may seem a tad one-note at times—there are some formal changes in painting, but not huge leaps of variety—what Yiadom-Boakye does well, she does very well. Every painting leaves you wanting to know more, grasping at meaning. One particular highlight is the back-to-back placing of the same seated figure, looking over his shoulder at us and taking up the huge canvases of Wrist Action (2010) and Bound Over To Keep The Faith (2012). Who is he? Is that a smile or the beginnings of a sneer? What does he know that we don’t? And why is he wearing a pink glove or a rope around his waist? We’ll never know but we’ll carry on wondering. 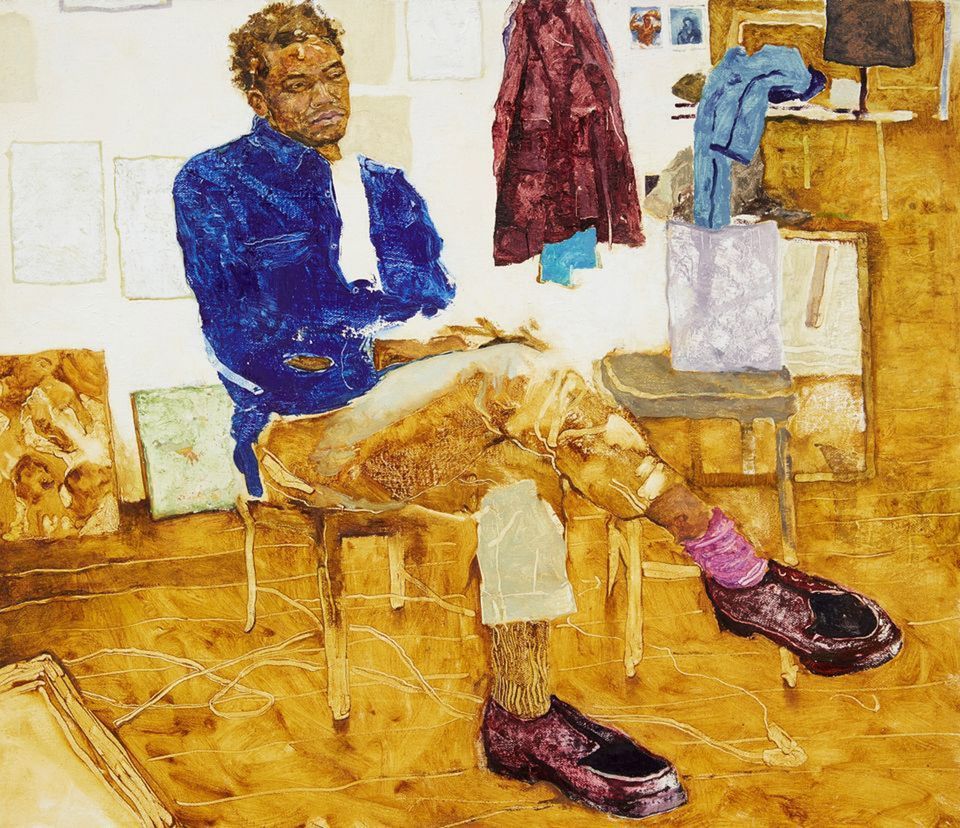 Packer’s Eric (2012-13), the subject sitting “in a room of things almost like satellites, floating around him” Photo: Jason Wyche; courtesy of the artist, Corvi-Mora, London and Sikkema Jenkins & Co, New York

Jennifer Packer: The eye is not satisfied with seeing, Serpentine Galleries, 5 December-22 February 2021

Awash in jewel-like hues and splashes of light, Jennifer Packer’s portraits of Black subjects have an auric quality. Like those photographs people have taken of themselves where the camera captures hazes of colours, supposedly energetic balances unseen by the naked eye, her paintings grasp at something just beyond the limits of accepted perception. This is the Bronx-based artist’s first institutional solo show in Europe, featuring 35 works, from those made soon after she graduated in 2012 to canvases finished just a few weeks ago. It comes at a time when the world has been forced to bear witness to state violence, systemic racism and the weight of Black death in the US. But do the eyes really see? It is a question Packer comes back to again and again in her practice as she meditates on the power of grief and beauty and grapples with the limitations of paint.

"Our senses are limited," says Packer in an interview with The Art Newspaper. "There is always something beyond what we perceive and therefore you’re never really able to represent it fully. When you’re painting someone, the subject gets wrapped up by the medium and its history but they also, of course, exist outside of that. So [painting] leaves space for… I want to say faith. There is an understanding that there are things that we don’t have access to, that exist around the things we make and things we do." 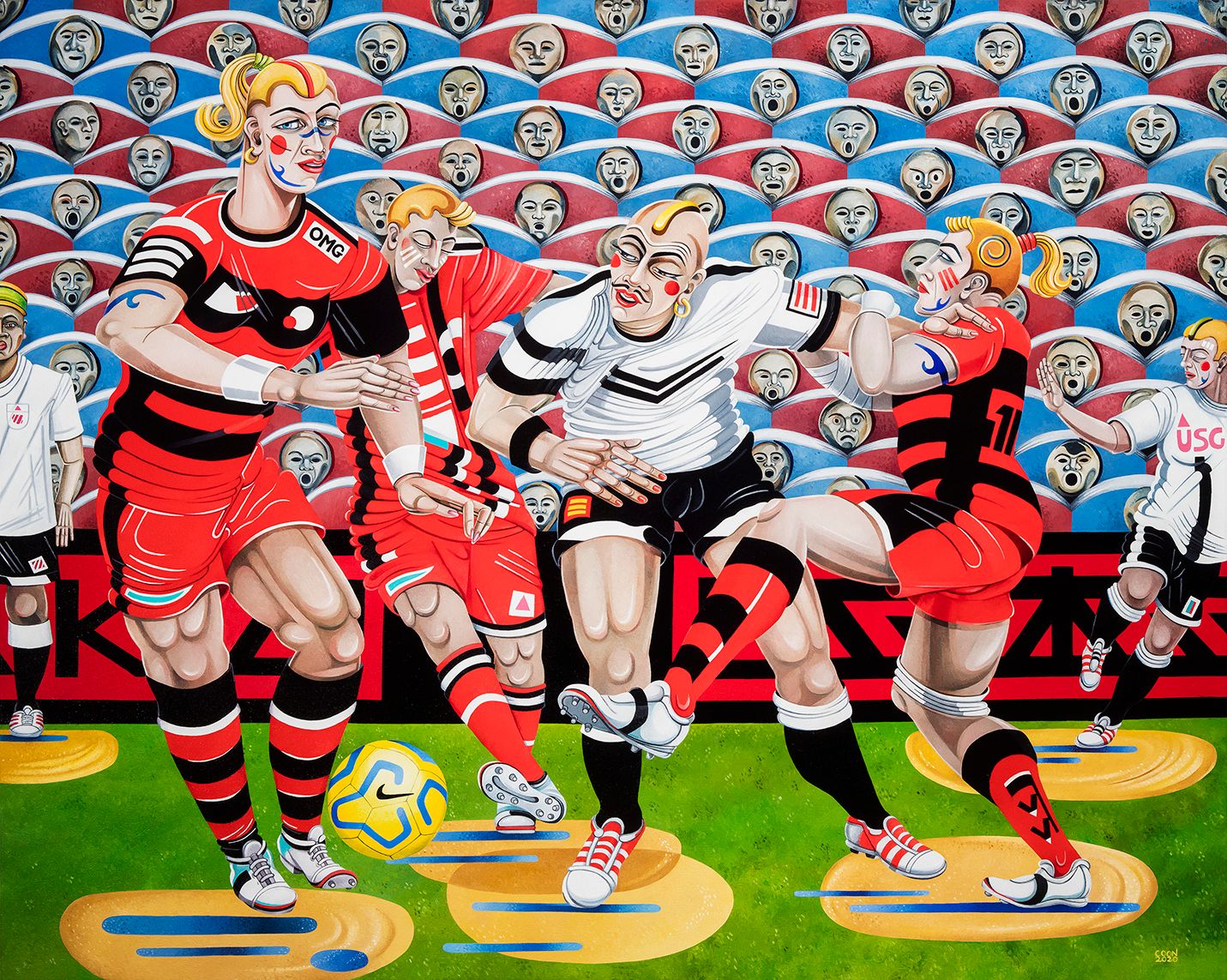 All bets are off when you step inside Caroline Coon's arena. Here, Amazonian hermaphrodite football players spar largely unrobed, bearing their pert breasts and meaty members as they charge and leap across the pitch. Their expressions range from reverie to rage, their poses, captured in elegant frieze-like compositions, from the balletic to the martial. It is football as you've never seen it before, but secretly always wish you had.

Presented by J Hammond Projects and the biannual art/football magazine Oof, this is only the second solo exhibition of work by 73-year-old Coon, who has recently enjoyed a late career "discovery" following decades of art world oversight. The eight works on show are all rendered in her distinctive, crisp-edged style reminiscent of paintings by Tamara de Lempicka and Paul Cadmus, and speak to her radical, playful politics that has championed sex work, gender fluidity and punk philosophy for nearly 60 years. Importantly, Coon is herself an avid Queens Park Rangers fan, as well as a seasoned football journalist. This, as the show’s organiser and Oof founder Eddy Frankel points out, means that "she’s not a fetishistic observer of the game, but a true fan”. For art world types uninitiated into the strange rituals of football, these works might seem a stretch for the imagination. But in truth, by depicting the sport at its most bizarre, glamorous and deeply homoerotic, Coons shows it at its most real.

about 15 hours ago
Revisiting the Gardner heist: no paintings, no arrests, but mobsters galore in new Netflix series