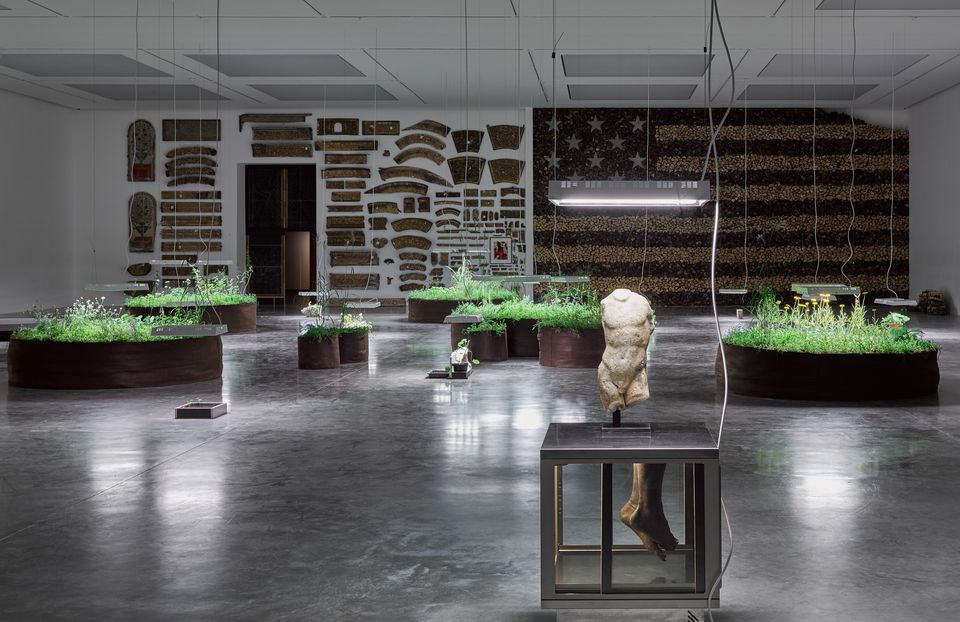 Danh Vo has spent the last year or so on a farm in East Germany thinking about dinosaurs, empires, nature and the Catholic church. The byproduct—a "pastoral exhibition" titled Chicxulub (after an asteroid impact crater in Mexico) at White Cube, Bermondsey (until 2 November)—is a three-millenia-spanning, thematically sprawling show that offers a new way to look at ancient things. Wood is everywhere. In the apple trees placed in the front courtyard and inside the gallery; the real wood-burning fires which fill the austere rooms with an uncanny warmth; walnut Christian iconography; and an enormous wall arrangement of gilded ornate carvings from 17th-century Portugal—displayed like excavated bones. Humans are everywhere too, of course. Our lost civilisations commemorated in 1st-century Roman marble sculptures, our new ones in the Johnny Walker-emblazoned crates they are placed inside of. Arranged in the South Gallery are a number of large plants bathed in light from hanging grow lamps. Towering over, an American flag made of stacked wood logs, which will be burnt one-by-one throughout the course of the show till its closure, on the eve of the 2020 US presidential elections. One small sapling grows intertwined with a fractured 19th-century sandstone eagle—a vision of the strange forms that might populate our planet's next 1000 years. In its expansive reach, this show makes you hyperaware of the ineluctable push of time, prompting questions of what comes next. Whatever that is, Vo reminds the viewer that it won't look like that which came before. Empires will fall, the earth will regenerate and the future will continue to surprise.

This weekend is your last chance to catch How to make a how from a why (until 13 September), an installation by the London-based artist Abbas Zahedi—the culmination of his six month residency at South London Gallery. Making reference to the building’s former life as a fire station, Zahedi has fitted steel pipes along the gallery's ceiling and walls from which, if a hand pump attached to a cistern in the room’s centre is pushed, rose water will slowly drip down into handmade ceramic bowls and brass jugs placed on the floor. Creating an ersatz—and no doubt ineffective—sprinkler system in a former fire station gives the show a macabre sense of humour, which is fitting as rose water is used in Iranian funeral rites, where Zahedi's ancestors are from. Playing from the gallery's doors and shutters (via the magic of a surface transducer) are found sounds from Iran, poems and eulogies. Filling the space with soft wails of mourning, Zahedi offers a contemplative piece that presents beauty alongside grief—a calm reflection on the complicated language of lament.

Describing In Plain Sight—an exhibition dedicated to Tavares Strachan at Marian Goodman gallery (until 24 October)—in detail can be challenging; visitors are obliged to stay tight-lipped about the many surprises revealed during the “immersive site-specific” experience. It is safe to say that an “experimental theatre” performance is at the heart of the show, opening up new narratives and worlds for the viewer. “I wanted to build something that was going to engulf the viewer,” says Bahamas-born Strachan who has certainly lived up to his pledge by mounting an all-consuming event focused on the early 20th-century African American polar explorer Matthew Henson. His legacy has been written out of history and Henson has become invisible, hence the Encyclopedia of Invisibility installation comprising 15,000 entries lifted from the Encyclopedia Britannica of largely overlooked people and places. A series of majestic plaster portrait busts (Distant Relatives), depicting Black pioneers such as writer James Baldwin and politician Shirley Chisholm, fill the upstairs gallery. Read our full interview with Tavares Strachan here.