Fever dreams: on Delirious at the Met Breuer

An exhibition on post-war art proves a little too ambitious 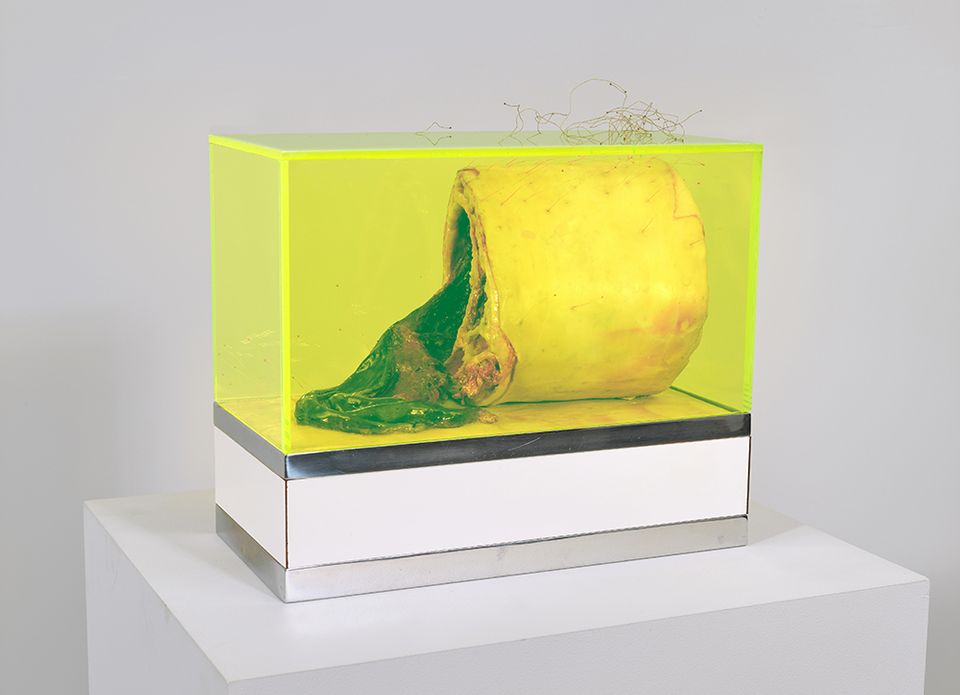 "Delirious times demand delirious art"—this is the proposition behind the Met Breuer’s current group exhibition, Delirious: Art at the Limits of Reason. The times in question are the three turbulent decades following the Second World War (1950-80); the art, 100 mixed-media works by 62 US, Latin American and European artists that advance an attack on rationalism.

The show's curator, Kelly Baum, has divided the work into four sections—Vertigo, Excess, Nonsense and Twisted—which explore different ways of manufacturing delirium in art. The artists in Vertigo create dizzying compositions and sightlines; those in Excess exaggerate serialisation; while the Nonsense and Twisted sections focus on artists who subvert language and disfigure or debase the human body.

Some inclusions are to be expected. For example, Viet Flakes, Carolee Schneemann’s eerie 1965 film, in which graphic images of the Vietnam War flash in and out of focus to a frenzied soundtrack, is presented in the show, as is Bruce Nauman’s Slow Angle Walk (Beckett Walk), a video from the same year showing the artist seemingly walking up walls. (In reality, the camera was just turned on its side.) Other works hide delirium beneath a restrained exterior, as with abstract geometric paintings by Al Loving and Larry Bell, which emphasise how colours and angles can be manipulated to disorienting ends. The stacked cubes of balsa wood in Sol LeWitt’s 13/3 (1981) are typically interpreted as emblems of mathematical reason. But as Baum observes in a wall label, LeWitt characterised his algorithmic sculptures as exactly the opposite: “In a logical sequence, you don’t think about it. It is a way of not thinking. It is irrational.” This fascinating reframing of Minimalist Art puts the severe lines of the Breuer building in a new light. Indeed, Robert Smithson’s 1967 Untitled (Model), a slanting grid of polystyrene squares mounted to a wall, begins to resemble a topsy-turvy Breuer maquette.

Although Baum and her team began planning the exhibition five years ago, Delirious feels like a pointed response to current politics, which is a reading the museum encourages. The show’s relevance is touted in press materials and Baum closes the exhibition’s online video trailer by noting that Delirious provides “a window onto the present." In the catalogue, she describes the show’s timing as coincident with “widespread social and political mania.”

In this way, the exhibition places an imperative on artists today to create work that responds imaginatively and forcefully to the events of the moment. Will it compel them to action?

Perhaps not. Delirious leaves the impression that whatever the precise context or intention behind artistic production, it will eventually be retrofit to a narrative of future anxieties and trends. Sol LeWitt’s assertion that Minimalism contains a germ of irrationality is critical to this exhibition. But his observation from 1969 that “one usually understands the art of the past by applying the convention of the present, thus misunderstanding the art of the past” may be more relevant.

LeWitt’s opinion of curating is admittedly cynical. The role of a museum curator—especially one tasked with organising a group show—is precisely to find cohesion and relevance in a diverse range of works (about a third of the ones here come from the Met’s permanent collection). It is false to suggest that Delirious misunderstands the art it presents—the exhibition’s strong catalogue demonstrates that a compelling thesis about strands of Post-war art’s fascination with madness, irrationality and psychedelia. However, telegraphing this thesis onto a transnational history of delirium feels like an overreach, as does attempting to neatly summarise 30 dense years with generalisations such as, "in many respects, delirium was the defining experience of the decades between 1950 and 1980" (this comes from the introductory wall text). The exhibition errs in attempting to stretch what would have been a succinct and successful show on Post-war art into an exhibition onto the Post-war era at large—and by extension, onto other “delirious” eras too.

This curatorial bloat might result in part from institutional expectation. The Met's President, Daniel Weiss, notes in his foreword to the catalogue that Delirious realises the museum’s 21st-century mission of taking “a global approach to artistic production.” This is a noble goal, but one downside, unfortunately demonstrated here, is that it can result in vagueness or over-simplification.

It also risks flattening the specificities of individual works of art. Many of the artists here employed delirious forms and ideas as a means of responding to social ironies and insanities—of fighting fire with fire. Dara Birnbaum’s video riff on the television game show “Hollywood Squares” and Martha Wilson’s ranked photo-taxonomy of attractive and unattractive breasts, both from the 1970s, appear in the Excess section for their hyperbolic use of grids. But more important than their formal connection is their shared purpose of demonstrating how femininity is stereotyped and judged in public life.

Many other artists in Excess, and their works—for example, Yayoi Kusama’s high heel-covered ladder or Hannah Wilke’s vulva-adorned postcards—not only mock standard forms of production but also emasculate them, a goal rather different from LeWitt’s hermetic experiments. Characterizing his work as “excessive” is illuminating and faithfully captures LeWitt’s intentions. In the case of Kusama or Wilke, however, the label seems slightly misleading.

To these reservations about cultural flattening, one could add a host of questions about the exhibition’s foundational logic. What constitutes a “delirious time,” exactly? And delirious to whom? (Supporters of Brexit and Donald Trump would call the events of 2017 reasonable responses to the political climate of our day.) Even if we accept that there are comparatively delirious times and that these produce delirious art, why do the years 1950-80 exemplify a mistrust of rationalism above other eras? Is the period after the First World War, which produced Dada and Surrealism, not an equally good example of a time in which deliberately anti-rational art movements flourished? Were the dramatic and nostalgic scenes of Romanticism not painted in deliberate reaction against the Enlightenment? Delirious’s premise is bold and thought-provoking, but ultimately too shaky and too broad to be entirely convincing.