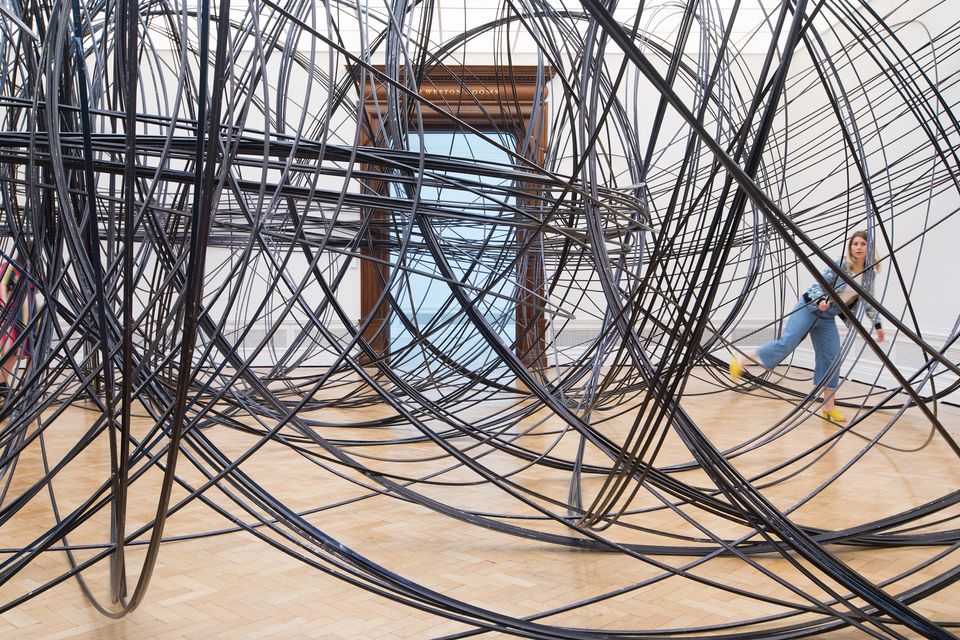 Antony Gormley has turned the Royal Academy of Arts’s grand 19th-century galleries into “a place where we can do things that have not been done before—a test site for collective experience”, he said at the opening last month. Some test, some site, some experience.

The physical limits of the RA have been well and truly pushed, with ultra-ambitious new works such as the densely criss-crossing metal grids of Matrix 111 (2019), which dangles six tons of standard mesh reinforcement steel from the ceiling to recreate what Gormley describes as the “inner skeleton of the environment we live in”. Apparently, this arrived in 380 pieces and took over one million welds to create, half of which were made in situ. Gormley recalled how he and his team wondered: “Would we make it in time? Would it hang? Would it hold? It did!”

Even more weighty is the colossal Cave, also made this year, which recreates a highly abstracted human form in 100 tons of overlapping sheet steel. This fills the show’s penultimate space with a dark maze of walk-through chambers, which required the strengthening of the gallery floor, just as Matrix 111 needed special ceiling beams installed.

But many of the show’s most effective works confirm that size—and weight—are not everything. Marooned in the expanse of the RA’s courtyard is a sculpture of a tiny baby, cast in solid iron from the six-day-old body of Gormley’s daughter (now 30-something). Paloma is a painfully vulnerable but utterly compelling presence.

Although not a chronological survey, the show goes back to the beginning. A high point is the room devoted to Gormley’s more modest experiments of the late 70s and early 80s. Here he wraps objects in lead and begins an enduring exploration of his own bodily traces, spaces and boundaries, whether as a figure-void eaten out of a grid of sliced bread, a silhouette surrounded by liquid clay or in the packed rings of a red ochre wall drawing that repeatedly outline a central running figure.

These mark the starting point of the now familiar permutations of the Gormley form—rendered in steel slabs, cast in iron, trapped in concrete—that punctuate this show. Refreshingly atypical are two stacked heaps of boulders and sausages of rolled clay that coalesce into a poignant pair of human figures huddled just by the exit.

A particularly powerful room simply contains three intersecting fine rods of high-tension reinforced steel, one stretching vertically from floor to ceiling and two extending horizontally through the space and out into the adjoining galleries, leaving everything around and in between empty, fraught with possibility. Then there’s Host, the grand finale, which floods the last gallery of the show with an expanse of Atlantic seawater (from which a few stowaway shrimps were being fished out just before the opening) covering a layer of ochre Buckinghamshire clay. Whether this briny lagoon is a bleak expression of apocalyptic destruction or fertile with primordial possibility is up to each of us to decide.

When the exhibition opened, Gormley’s wife, the artist Vicken Parsons, described the minimal-maximal pacing of her husband’s show as being akin to “breathing in and out”, and certainly, all those involved with this most exacting of exhibitions were also allowing themselves a profound sigh of relief that all was now safely in place.

From Bridgerton vibes to fantastical fireworks: here are the best arty staycation spots in the UK

From Bridgerton vibes to fantastical fireworks: here are the best arty staycation spots in the UK

Honey, we shrunk the gallery! Leading artists including Damien Hirst and Lubaina Himid to create miniature masterpieces for UK exhibition

Honey, we shrunk the gallery! Leading artists including Damien Hirst and Lubaina Himid to create miniature masterpieces for UK exhibition