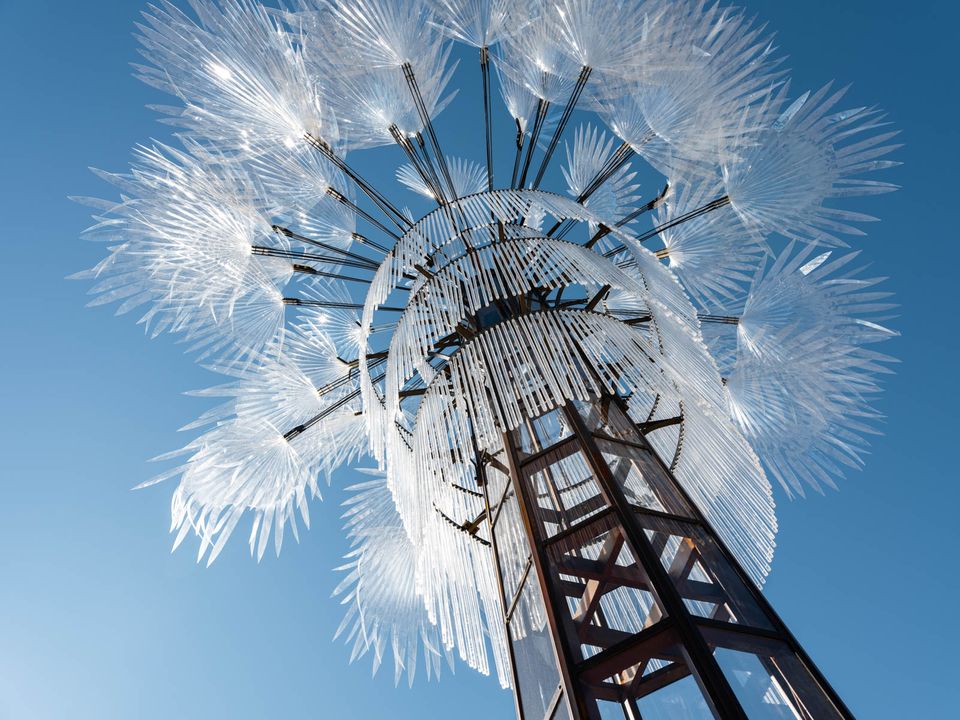 Climb behind the Two Bunch Palms Resort in Desert Hot Springs, sidestep the clumps of cacti, and you will find a sculpture by Katie Ryan that looks like the love child of a palm tree and a Victorian-era chandelier. Her tree has a steel trunk, glittering plastic fronds, and a skirt of acrylic rods—odd jewellery for land shaped by the San Andreas Fault. She calls the translucent work Ghost Palm, and it is one of the most engaging works in this year’s Desert X (until 21 April).

Unfortunately, other ghosts also haunt the exhibition. Jenny Holzer’s plans for an anti-gun violence text piece to be projected on a Whitewater Preserve mountainside were scrapped after permission was rescinded out of concern for bighorn sheep that had been devastated by pneumonia. And then there is the spectre of the memorable first Desert X in 2017, when the artistic director Neville Wakefield commissioned high-impact (and Instagrammable) installations in the desert by artists such as Richard Prince, Doug Aitken and Tavares Strachan.

For this edition, Wakefield teamed up with the Los Angeles-based curators Amanda Hunt and Matthew Schum to diversify the artist list and extend events beyond the Palm Springs area, going as far east as the Salton Sea, 60 miles away. The good news is that they toned down the event’s macho swagger. The bad news is that there are fewer must-see pieces and more half-baked, research-driven works. Or, as a frustrated New Yorker said on my bus tour, “too grad school”.

Take the installation It Exists in Many Form by the collective Postcommodity. The artists interviewed owners of mid-century homes and had actors read the transcripts for part of a seven-channel sound installation at the 1950s Wave House in Palm Desert, currently undergoing a gut renovation. But no matter where you stand in the house, you cannot make out what anyone is saying. The work is so unintelligible that visitors might not even register it as art. 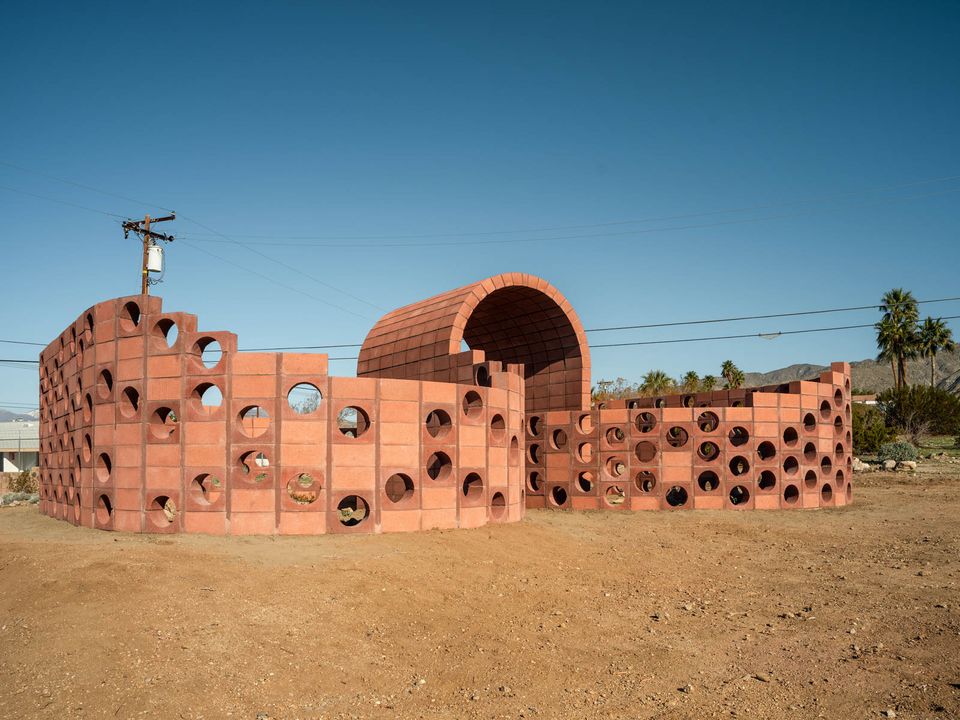 Is it too much to ask for public art to remember, if not always reward, its audiences? Those that do include a series of photographic billboards on the Gene Autry Trail by Cara Romero, featuring startling but also welcoming images of boys from her tribe, the Chemehuevi. She calls them “time travellers that came to the Coachella Valley to visit sister tribes”.

In another work that complicates clichés about the American dream, Pia Camil has made a pair of large, eye-catching rainbows out of rebar. She set one against the mountains in Rancho Mirage and planted another in Baja, Mexico—in effect, spanning the border.

Julian Hoeber’s Going Nowhere Pavilion #01, in Desert Hot Springs, is a mind-bending building made of perforated bricks that works as an architectural Möbius strip. The work doubles upon itself like a person aware of herself thinking, and as you walk along the curves you have the disorienting feeling of not knowing what it is, or what it is for. “I tell architects it’s sculpture, and I tell sculptors it’s architecture, so they don’t bring their own stuff to it,” the artist says. 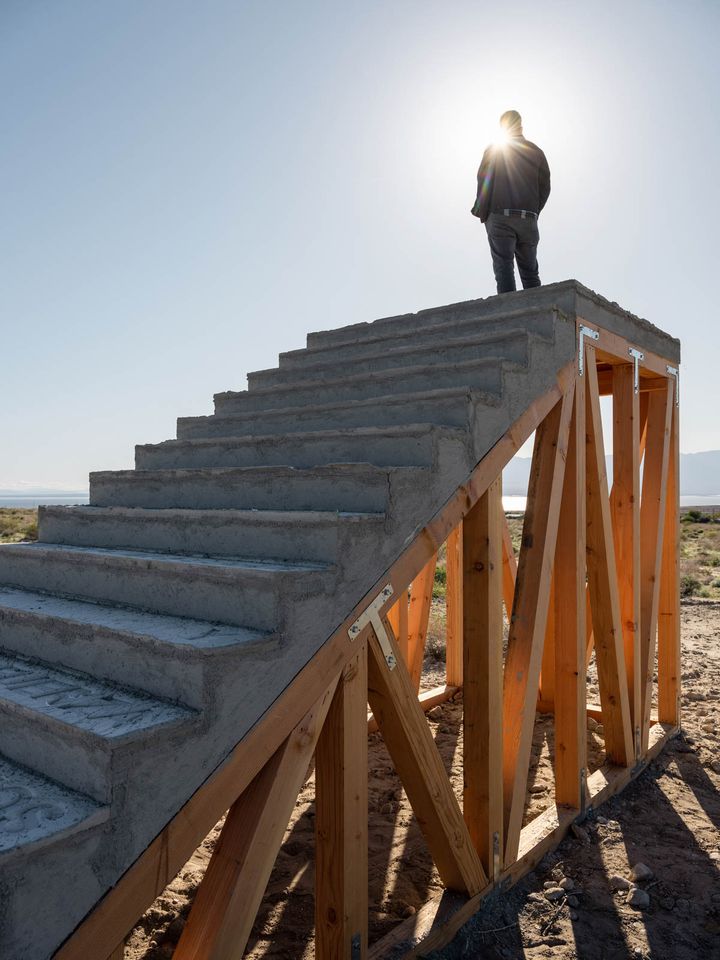 Finally, some works made near the Salton Sea—a shrinking body of water that endangers the health of nearby residents with its algae blooms and chemical irritants—are worth the drive. Iván Argote’s A Point of View, a cluster of five concrete-and-wood viewing platforms at the edge of the water that are essentially brutalist staircases, is by far the best. The Spanish/English words engraved on the stairs nod to our stewardship of the land: with sightseeing comes responsibility.

Steve Badgett and Chris Taylor have also been working on the Salton Sea, in a pontoon boat they built to act as a floating laboratory. They plan to spend days, and some nights, on the boat to plumb the water’s depths with sonar imaging, looking for things such as buried railway ties, dead fish and underwater craters from dummy nuclear bombs once dropped from a nearby test base.

I loved hearing the artists talk and would love, sea stink aside, to join them on the boat for a day, but that is not part of the project. The actual work produced is rather meagre: some abstract sonar images are sent to the visitor centre to be interspersed with the usual tourist videos. If only the artists could turn their excavation of the sea into something visually or materially compelling—an archaeology of objects, not ideas.