Visitors undergo a chain of experiences generated by engineers’ algorithms 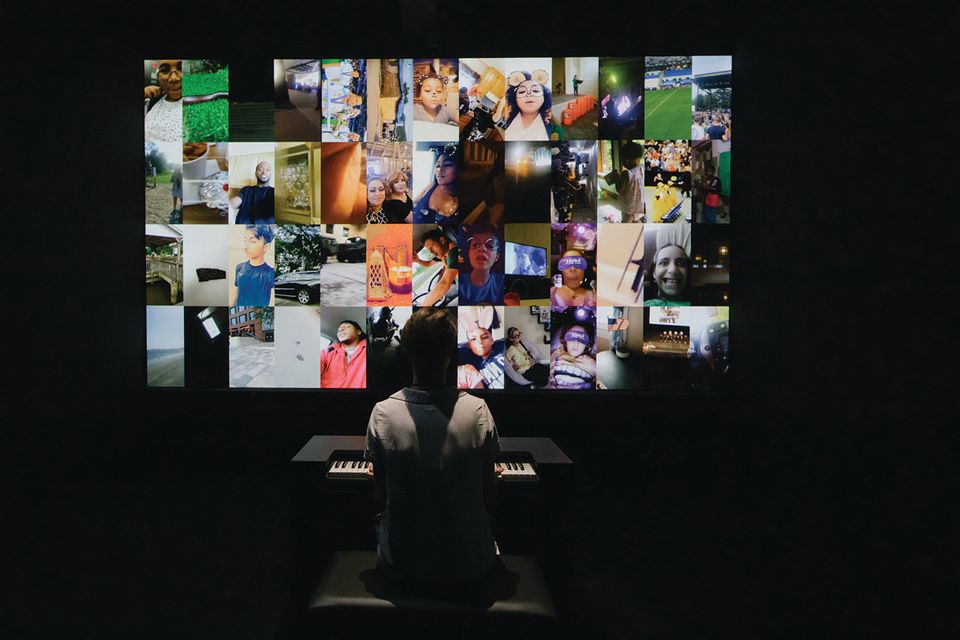 To followers of Christian Marclay's work as a medium-juggling artist, it seems inevitable that he would see creative potential in social media. Now, the fruits of his collaboration with Snapchat, five installations collectively titled Christian Marclay: Sound Stories, have opened at the Los Angeles County Museum of Art, one of the institutions astute enough to have promptly acquired his 2010 video epic The Clock.

Visitors who have tasted The Clock, a work of vaulting ambition, duration and intricacy, may enter Sound Stories with sky-high expectations. Deflating those hopes, the current exhibition draws as heavily upon snaps–10-second, quickly expiring videos posted by potentially anyone–as The Clock does on "the phantom empire" of commercial cinema, as Geoffrey O'Brien dubbed it.

A small team of assistants helped Marclay cull film archives for the minute-by-minute time signature clips that make The Clock a precise chronometer of its own 24-hour running time. To make Sound Stories, the artist needed the help of engineers from Snap Inc., who customized algorithms to achieve what he had in mind.

At a press preview, Marclay said that he had originally thought of having visitors to the exhibition upload fresh content into his pieces daily, but that this proved impractical for a variety of reasons. Instead, he found various formats for harvesting existing Snapchat content.

As one might expect, Sound Stories makes for a possibly unique museum experience, but one whose visual and sonic details elude description and may escape memory completely. "I believe in individuals' ability to get something out of any experience," Marclay said, when asked how much he cared about what visitors might retain of Sound Stories.

"We don't worry so much when we're talking to people about what is being retained or even what the consequences of what we're saying are,” he said. “That lightness, and the ephemeral quality are what attracted me to Snapchat in the first place.”

“I think the younger generation is less interested in things that remain,” he added. “We all have loads and loads of photos, and they're all backed up, yet it's very hard to go back."

Three pieces in Sound Stories make a stirring impression. All Together (2018), the first work encountered, plays a looped composition of found sounds and their generative images on the screens and speakers of ten smartphones arrayed in an arc near eye level in a darkened space. It took Marclay five months to collect and arrange the 400-odd snaps involved, which contain everything from squawking and yipping pets to footfalls, frying food, hailstorms, blaring fire engines and the occasional ding or toot of an actual musical instrument.

At some moments, the images predominate, but they are quickly yanked away by the work's clattering chain of pitched and unpitched sounds. The piece is entrancing, in a John Cage-an sort of way.

Tinsel Loop (2018), in the next gallery, repeats an 18-note melody that Marclay composed in 2005, sampling snaps displayed on two facing flat screens that contain sounds–vocal, mechanical, inadvertent–that correspond to the melody's successive pitches. The sequence of pitches repeats as the imagery continually changes.

The show culminates in The Organ (2018), which has a large room to itself.  Here, an electric organ, its keyboard spotlighted in an otherwise dark space, invites visitors to play it, no musical training required.

Rather than produce its own sound, the organ, through an algorithm, projects on a wall-size screen a vertical strip of snaps with sounds corresponding to the note of each key. An unexpected visual analogy arises here between the vertical snap arrays and the film strips produced by old-fashioned photo booths, which may be Snapchat's truest precursor.

That analogy also brings to mind Andy Warhol, who, with Cage, seems foremost among the artistic spirits presiding over Sound Stories. I thought several times of Cage's early performances with radios, which were unscripted in any conventional sense.

As someone with a low tolerance for interactivity in art, I can recommend The Organ to everyone within its reach. I stayed with it so long that other visitors on preview day mistook me for a hired performer, though certainly not on musical grounds.

The last two Sound Stories could have been cut from the show to its benefit. Talk to Me/Sing to Me (2018) presents a sort of hanging garden of smartphones, again in darkness, with each displaying the invitation of the work's title.

Algorithms contrived by Snap Inc. engineers cause each phone to cough up a snap imitative of sounds spoken or sung to it. The ingenuity here lies mainly in the algorithmic invention, as the surprise of an electronic mimicry formed by chance wears off quickly, leaving a dreary alienation peculiar to the human/electronic interface.

The final piece, Sound Tracks (2018), brings the show to an unrewarding and chiropractically challenging end. Here a cluster of computer tablets, each isolated in its own black lampshade-like funnel, appear to be mounted on the ceiling. Each exploits the Snapchat app's so-called turtle mode, which in theory slows the flow of imagery and sound to expose otherwise unnoticed aspects of the posted material. Nothing I saw in the piece redeemed the neck pain of staring upward expectantly.