“So many tropes going on in his work, it would make a lovely laundry list,” says the British artist of his US counterpart 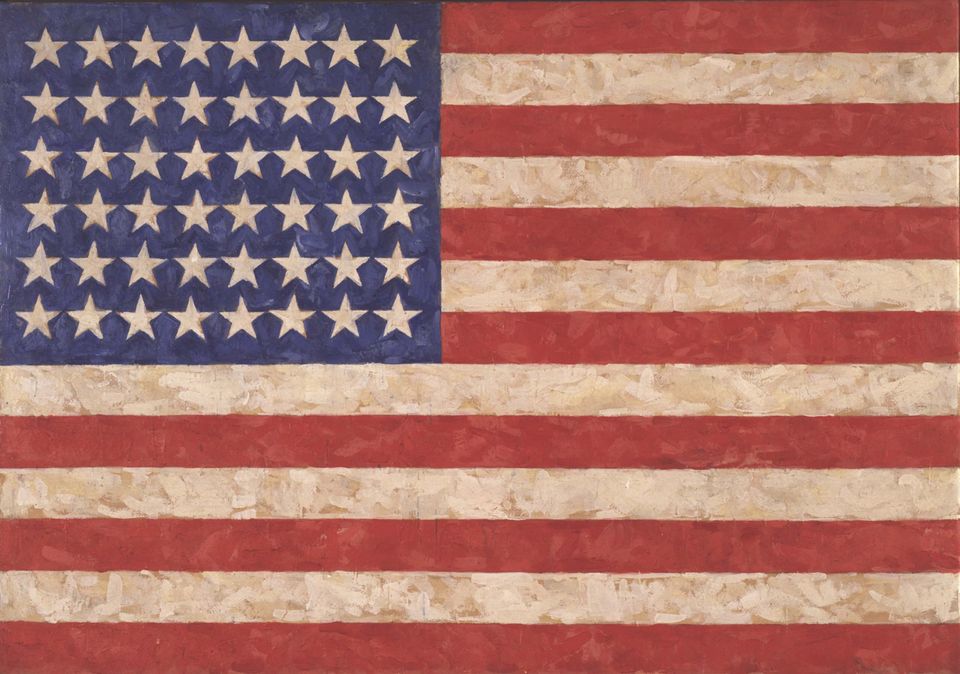 Before visiting “Jasper Johns: ‘Something Resembling Truth’“ at the Royal Academy of Arts (RA) in late September—London’s most extensive look at Johns’s art since his 1990-91 Hayward Gallery exhibition, organised in collaboration with the Broad in Los Angeles—I reread the raw text of my 2013 interview with the artist. Johns is not easily surprised in such situations, but one question broke his laconic conversational stride.

A London artist friend, I told Johns, wanted to know whether early in his career he had been particularly captivated by Picasso’s 1914 painted bronze sculpture, Glass of Absinthe. After a mildly stunned pause, he averred that he had been. “I think I thought it was absolutely wonderful,” Johns said. “The casting, the painting, the addition of the absinthe spoon, all of it.”

The London artist who had posed the question was Richard Wentworth. What interested me most about the RA show as an American critic was the response of the informed London art public. So I arranged to visit the show with Wentworth.

“I didn’t see the Hayward show,” Wentworth said, “though even as I say that, I’m really not sure whether I did. But I know various people who saw it who were so overcome by the work that they started to make Johns-ish things. I think he was picked up on here the same way the English tend to pick up on French painting: pretty aesthetically. The reason a lot of people who imitate Johns are so awful is that they’re taste-mongers, and he’s doing something else. There are so many tropes going on in his work; it would make a lovely laundry list of hanging string, sidedness, tense chain, brokenness, mirrors, glass, the dead flashlight.”

But as to contemporary response, Wentworth was optimistic. “I think students will see this work and be very affected by it,” he said.

I’ve always thought that to be with Johns in a thrift store would be an incredible experience, just to see what he would say Richard Wentworth

Wentworth was surprised that Johns’s infamous Flag, a 1958 version of the flat, edge-to-edge encaustic rendition of the 48-star Old Glory, as Americans call it, does not appear foursquare in the exhibition’s entrance gallery.

Instead, the entering visitor confronts a more-or-less abstract painted assemblage called Within, dated unusually 1983 and 2005, flanked by a 1961 Target and an exercise in reminiscence, Racing Thoughts (1983). “When you hang a show,” Wentworth said, “you do what you do. We come in and think ‘why put that there?’, but maybe it arrived late.”

By chance, we were soon told to stay out of a gallery that lay ahead because Johns’s famous 1960 pair of painted, cast bronze ale cans was being installed there, apparently having arrived late.

I mentioned that the US flag—today’s 50-star version—is vivid in the public mind again now, under a president trying to marshal a nostalgic nationalism as cover for wholesale political reaction. But Wentworth was more startled to learn that the odd-shaped slate slab used in stonework that Johns took to mimicking in the late 60s—it makes a ghostly appearance in Within—is known in the trade as “irregular flag”. “Imagine what’s stored in an artist’s work that he can’t imagine is stored in it,” Wentworth said.

At that, I remembered Paul Schimmel, the curator of the Los Angeles Museum of Contemporary Art’s 2005 survey of Robert Rauschenberg’s “Combines”, telling me how private memories embedded in the work of Johns’s youthful comrade and lover had brought Johns to tears several times during a private tour of the show.

The exceptionally garish Flag on Orange Field II (1958) ignited Wentworth’s imagination of its historical moment. “What a weird orange, on the edge of vulgarity, not that far away from neon,” he said. “America at that time had a lot of colour; a Life Magazine from that time actually looks like French painting. All this work was being produced in that period of available sumptuosity, colour and synthetics. I’ve become interested in that, now that we’ve become synthetic. At some time in my education I was taught that a man and his family living in a village saw perhaps three images in their lifetimes—and they were all in the church. I dread to think how many images I deal with in a day. Our job is to un-see all this stuff.”

Scanning Johns’s early uses of grisaille and low-contrast, low-definition imagery, Wentworth said: “The funny thing about this is he’s coming into a world that’s going to become trashily colourful.”

Turning his attention to the wordplay in Johns’s early work, Wentworth noted that “There’s this funny feeling that he’s talking to himself a lot.” Johns made great sport of stencilling colour names in corresponding and contradictory hues. “Don’t get the names wrong!” Wentworth said, in joking fantasy of an artist’s inner voice. 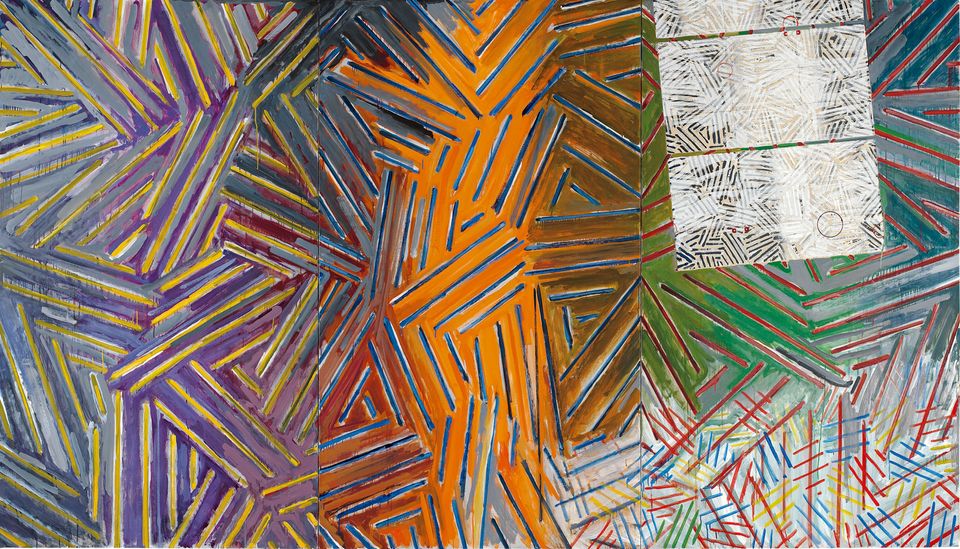 But what caught his eye as much as the overt wordplay were tiny, repetitive inscriptions in a graphite study for Target with Four Faces, a major early relief painting absent from the RA show. “There’s something rather odd about when a note is a note, and when a note is art,” Wentworth said, seeing the handwritten word “face” repeated, as if Johns needed reminding of his own idea. “He’s an artist who feels the curiosity: is that action? Is it calligraphy? A raving?”

“I imagine that he’s alone, that he’s quite lonely, whatever that means,” Wentworth said long before we came to Johns’s mid-1980s exercises in melancholy memory. “He uses workaday materials and humdrum techniques. Many, to me, are distinctly America-specific, inexpensive and straightforward,” the artist’s hand appearing literally among them.

“I remember asking Jon Thompson what encaustic was,” Wentworth continued. “I’ve never really understood it, but I remember him saying you have to hold an iron to the back of the painting.” Deep in the exhibition, we encountered an encaustic painting with objects attached—Passage (1962)—that Wentworth deemed “magnificent”. It includes a silhouette of an iron, with its name stencilled in, acknowledging itself and irony as tools.

“I’ve always thought that to be with Johns in a thrift store would be an incredible experience, just to see what he would say,” Wentworth said, dwelling on found assemblage elements in the work. Why a thrift store? Because there, Wentworth said, we meet the fact “that everything means something to everybody. The whole thing about talismans, which runs up against Joseph Cornell.”

“I suppose I think that Johns is the painter that Walker Evans proposes,” Wentworth said, “full of mirroring, somebody forgets what they were doing and puts the same poster up again, all of that... Casting, like printing and the photo processes is all mirrors, the sexuality of surface to surface, and the comedy of ‘naming’.”

I think of Wentworth as a maker of sculpture, though his photographs—a sort of running psychosocial journal of material life—have proliferated in recent years. So I wanted to know his response to some of Johns’s sculptures, such as Flashlight III (1958), an antique flashlight embedded in a lumpy matrix, like something from an archaeological dig.

“It’s like the presidents in the mountain, isn’t it?” Wentworth added, thinking of Gutzon Borglum’s colossal Mount Rushmore portraits. “I think I read somewhere that he went out to get another flashlight like this and he couldn’t find another one. It’s so interesting, this tidal rhythm of desire and loss, because that’s all we are anyway. I think he’s revisiting that as perpetual subject matter all the time.”