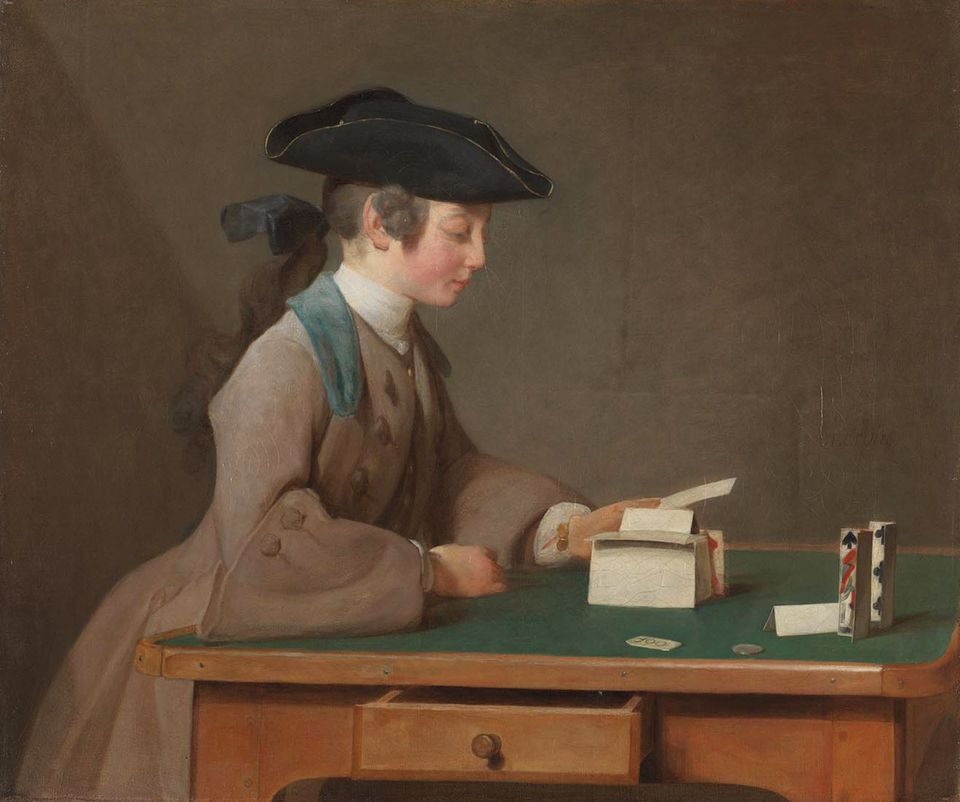 The pleasures, rewards and responsibilities of cultivating one’s own garden are manifest in the National Gallery’s excellent permanent collection catalogues, a series launched over 20 years ago. Humphrey Wine’s lavishly illustrated volume devoted to the gallery’s relatively small collection of 18th-century French paintings is the tenth to  appear. It is also the largest book so far: a catalogue of 624 pages, with an additional online appendix on the 19th-century collectors of the gallery’s 18th-century French paintings. Admirably  comprehensive, Wine’s book catalogues 60 authentic works and 12 replicas, copies or pastiches.

The taste for, and interest in, French 18th-century paintings at Trafalgar Square has suffered from the proximity of its neighbour in Manchester Square, a couple of miles north-west. The Wallace Collection—established in 1897 with the injunction that its works “always be kept together unmixed with any other objects of art”—boasts superb holdings of all the arts of the Ancien Régime in France, notably masterpieces by Watteau, Boucher, Greuze and Fragonard. It rendered the 18th-century French school something of a step-child in the national collection, never fully predisposed towards the libertine pleasures of the Rococo.

It would take almost a hundred years for the fortunes of the 18th-century French school to improve, as they did markedly under the directorship (1973-86) of Michael Levey, who worked on a catalogue, never published, of this collection. Now Wine, appointed the curator of 17th- and 18th-century French painting in 1991—and responsible for the fine catalogue of the 17th-century French school (2001)—has produced a thorough, judicious and very well researched volume, assisted by the unparalleled resources of the conservation and scientific departments.

As an example of their collaboration, Picasa 3.5 facial recognition software was used to confirm that the features of Hyacinthe Rigaud’s sitter, Antoine Pâris—the enormously wealthy financier and war contractor—are not those of the sitter in the related portrait in the Norton Simon Museum, despite the similarity of every accoutrement, from marble-topped table to velvet robe (an estimated 15m of fabric), to pilastered library and ornamental urn. And, in truth, when the two men are compared in the respective colour illustrations on the facing pages, their physiognomies are distinctly unalike.

Although it does not represent the full range of painting produced under the authority of the Académie royale during the 18th century—the National Gallery (NG) lacks both a religious composition and a still-life—this small and choice collection boasts exceptional works by Watteau, Chardin, Subleyras, Saint-Aubin, Vernet, Fragonard and David, as well as masterpieces by somewhat lesser figures such as Lancret, Drouais and Danloux. There are wistful, but discreet, allusions to recent missed opportunities to acquire a fantasy portrait by Fragonard and a still-life by Chardin—lacunae that might be remedied in the future, although in May 2004 the museum was able to marshal considerable resources for Danloux’s exquisite portrait of the Baron de Besenval in his Salon (1791). This painting—in which, as Wine notes, the “sitter is commemorated as a collector in a portrait worthy of a collector”—is the subject of the longest catalogue entry I have ever read, with no fewer than 229 footnotes to its credit.

In the absence of a dynamic acquisitions policy, the NG has benefited from the largesse of art historians. In 1980 Jeffrey Daniels, a specialist of Sebastiano Ricci, bequeathed Louis de Boullogne’s Nessus and Dejanira (around 1700); Pierre Subleyras’s affecting Diana and Endymion (around 1745) was accepted in lieu of inheritance tax from the estate of Brinsley Ford’s widow in 2002. The most recent bequest to the national collection, Louis-Jean-François Lagrenée’s tender and delicate Maternal Affection—a small painting on copper, commissioned in 1775 by William Petty, Earl of Shelburne—came, somewhat surprisingly, from the irascible critic, Brian Sewell, who died in 2015.

Wine introduces his catalogue with a brief survey on the taste for 18th-century French painting in Georgian England. Anti-French sentiment—stoked by fears of a Stuart restoration until 1746, and propagated after mid-century by the Anti-Gallican Society, established to protect British trade and manufacture—coexisted with an appreciation, indeed an appropriation, of the modern style in French arts and design. Just as the Anti-Gallican Society used Jean-Baptiste van Loo’s portrait of the “true Patriot” Robert Walpole to decorate its Battersea enamel snuff boxes, so in 1757 did the publisher John Bowles turn to the French-born engraver Louis Philippe Boitard for his satirical sixpenny print, The Imports of Great Britain from France, “humbly addressed to the laudable Associations of Anti-Gallicans”. Wine notes the modest market for French history paintings and allegories throughout the century; the opportunities for French portraitists in London in times of peace; the growing demand for modern French genre painting in the Flemish style, and the market share enjoyed by Joseph Vernet’s seascapes and marines by the second half of the century. In some ways the gallery’s collection continues to reflect something of these priorities today, with its extensive holdings of paintings by Lancret (nine), Greuze (six) and Vernet (five).

With their requisite listing of provenance, exhibition history and notes on condition, the meticulous identification of preparatory studies, autograph versions and copies, and an occasionally wearying need to record, discuss and adjudicate every previously published opinion, Wine’s catalogue entries do not always make for the easiest of reading. But the range of his interests and enthusiasms is impressive. We learn about the size and variety of copper cisterns in domestic service (Chardin’s Water Cistern (1733 or later)), the manner of placing stakes in tidal waters to support fishing nets (Boucher’s Landscape with a Watermill (1755)), and the differences between astronomical and terrestrial telescopes (Boilly’s Girl at a Window (around 1799)). 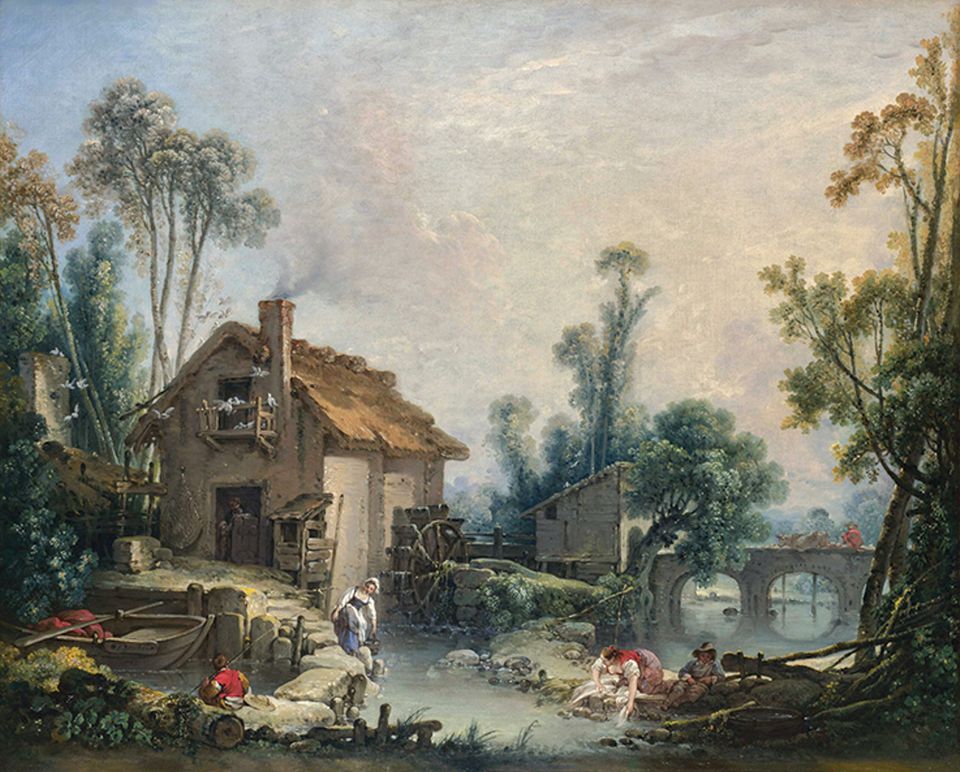 François Boucher’s Landscape with a Watermill (1755) is typical of the Rococo landscape style © The National Gallery; London

Wine provides excellent accounts of the most significant paintings in this collection. He makes a strong case that one of the NG’s most beautiful paintings, Chardin’s House of Cards, should be dated to around 1741 and not earlier, since it is unlikely that the father of the sitter—Chardin’s friend, the marchand-mercier Jean-Jacques Lenoir—would have wanted the portrait of his young son to appear at the salon several years after it had been painted. Wine proposes that the chip and coin on the green baize of the table are the remnants of an adult game of piquet, and notes also that the suits of the folded cards standing to attention at right—spades and clubs—were likely a witty allusion to the patron’s family name (Le Noir).

Wine provides an illuminating entry on Fragonard’s Pysche showing her Sisters her Gifts from Cupid (1753), acquired for £8,000 in 1977 by David Carritt at the Mentmore sale, where it had been incorrectly catalogued as by Carle van Loo. He draws attention to the considerably larger size of Fragonard’s original canvas: the top has been truncated by 26cm, and an even larger portion is missing from its left-hand side (as much as 34cm, and possibly as many as seven figures). In its original form, Psyche’s envious sisters would have been placed firmly in the centre of the composition, their gazes directed towards the munificent jewels and baubles that are now entirely missing from Fragonard’s picture.

There are many other satisfactions in Wine’s entries: his judicious assessment and illustration of all the preparatory and related drawings for Watteau’s Gamme d’Amour (1717-18), a brilliant discussion of the Pâris brothers’ restoration of the Crown’s finances following John Law’s bankruptcy in 1721, the failure of their Visa system, and their precipitous fall from power in 1726 (two years after Rigaud painted the magisterial portrait of Antoine Pâris), an exemplary biographical summary of Jacques-Louis David’s 36-year-old sitter, the Batavian Ambassador Jacobus Blauw, whose portrait Wine shows to have been painted in little over a month (between 25 October and 29 November 1795, to be precise).

Occasionally Wine’s fastidiousness in seeking documentary precision leads him to muddy the waters. Because the dimensions of Lancret’s Lady in a Garden (1742) differ from those given in the Salon livret of that year—as do those of his related Portrait of the Actor Grandval in the Indianapolis Museum of Art—Wine makes the unhelpful suggestion that both paintings might be reduced autograph replicas of the lost originals exhibited at the Salon of 1742. Alternately, for one loath to speculate on provenance, he proposes that Nattier’s ravishing Portrait of Manon Baletti (1757) may have been commissioned by the 32-year-old roué (and friend of the Baletti family), Giacomo Casanova, who was in love with Manon at the time. However attractive, this claim cannot be substantiated and is inconsistent with Casavova’s peripatetic lifestyle, wayward fortunes, constantly changing affections and lack of interest in contemporary art. But these are small points of disagreement on which it would be churlish to linger. Specialists of 18th-century French painting—and enthusiasts of the period in general—have a great deal to look forward to in the pages of Wine’s hefty compendium.

Colin B. Bailey is the Director of the Morgan Library and Museum in New York