A monumental study of the heyday of Historicist painting 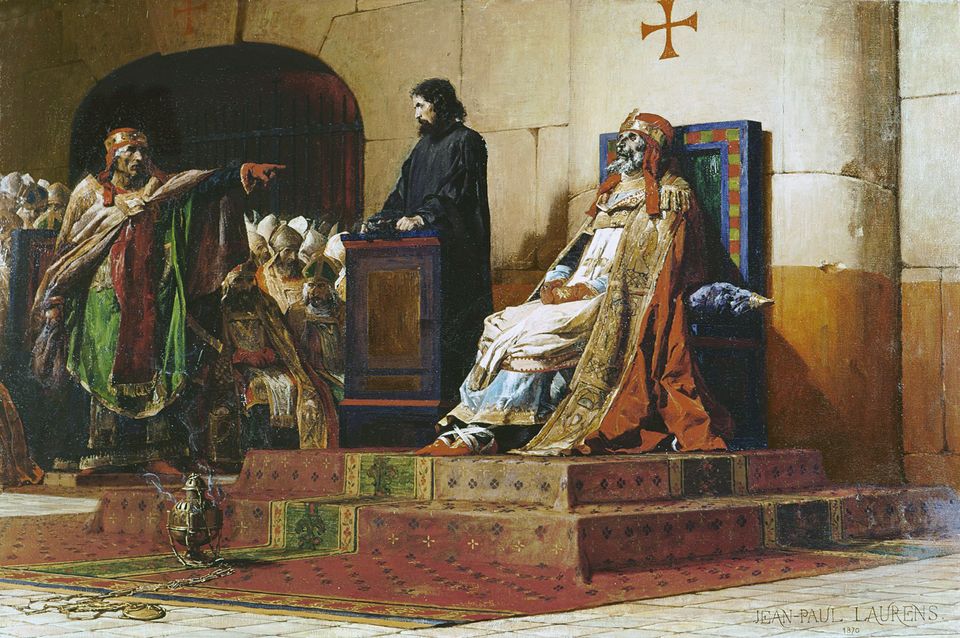 Anticlerical: Jean-Paul Laurens painted Pope Formosus and Stephen VII (1870) as a historic pointer to the church’s backwardness and barbarity The artist

This book begins with a striking juxtaposition of two paintings. Both depict Napoleon crossing the Alps on his Italian campaign of 1800—yet in one we see the commander in a guard’s uniform, riding a spirited white horse and signalling the way forwards with his right hand; in the other he is trotting along on a weary mule, wearing a grey greatcoat and a gloomy expression. The earlier painting is by Jacques-Louis David and dates from 1801, the later one by Paul Delaroche from 1848. The same event, yet interpreted in two different—indeed, contradictory—ways, half a century apart.

Historical painting—by which we mean the depiction of historical events rather than mythological stories—does more than “just show how it actually was”, to borrow Leopold von Ranke’s famous pronouncement on the historian’s role. It interprets, embellishes, condenses, distorts, depending on the perspective, and the chronological distance, from which the relevant event is viewed. The Golden Age of historical painting is the 19th century, and most especially the period between 1830—after the Europe-wide upheavals wreaked by the Napoleonic wars had started to fade away—and 1900, when the new century began to free itself from this fixation with the past.

The Berlin art historian and Max Liebermann expert Matthias Eberle has devoted a comprehensive publication to this period Im Spiegel der Geschichte: Realistische Historienmalerei in Westeuropa 1830-1900 (History’s mirror: realistic historical painting in Western Europe 1830-1900). His book presents in all its magnificence a subject long scorned rather than forgotten. Secular historical painting had existed for centuries. Yet it was only the 19th century, having experienced a complete meltdown of political structures at its outset, that understood historical events as facts to be illuminated in all their various dimensions. Eberle points to the historical novel and its first great exponent, Walter Scott, who was able to bring medieval events to life for a contemporary readership. Then historical novels were being written everywhere, by authors ranging from Victor Hugo to James Fenimore Cooper. Painters followed suit. The first internationally important historical painter was Paul Delaroche, whose English history subjects brought him particular success in Britain.

In his large-format book of almost 500 pages, Eberle considers France first and foremost, alongside Germany and Britain. Historical classification in national “schools” is accompanied by a presentation of cross-border connections, particularly between France and England. Eberle meticulously outlines the paintings’ literary sources and the circumstances in which they were produced, although observation and interpretation of each individual image remain at the heart of his work. Here Eberle proves himself entirely the old-school art historian.

In the rich detail of a book developed over many years, he sometimes loses sight of the fact that historical painting’s heyday runs in tandem with the triumphant advance of nationalism. Visualising the nation’s history served to legitimise current systems of government. We might want to ask to what extent the many depictions of scenes from antiquity can really be called “realistic” in the strict sense of the word. Whether the artist in question is Jean-Léon Gérôme or Georges Rochegrosse, this is a costume realism that has more to do with grand opera than a source-based study of antiquity.

Contemporary events had an influence on historical painting, first and foremost the revolutions that erupted in several European countries in 1848. Past deeds were supplanted by the depiction of present-day events, as when Adolph Menzel painted the victims of the revolution lying in state. When the political situation did not improve, though, Menzel fell back to producing idealised images of the Prussian King Frederick the Great.

In Britain, by contrast, and especially in the decoration of the new Houses of Parliament, built from 1840 onward, artists could depict events that had directly contributed to the greatness of the country. Eberle’s presentation of British historical painting represents a departure from the standard art-historical model, with the dominance of French painting: in Britain the treatments of medieval and early modern events, and of current social problems and industrialisation, are interconnected. Eberle persuasively interprets Ford Madox Brown’s major painting Work (1863) as a state-of-the-nation picture—even though this painting specifically presents not a concrete event but a general situation.

The limits of historical painting are touched on more than once—for example when Eberle interprets Lawrence Alma-Tadema’s paintings A Sculpture Gallery and A Picture Gallery, set in Roman antiquity, as an ironic commentary on the art market of his own time.

The Franco-Prussian War of 1870–71 brought a renewed abundance of sources for historical painting. Subjects from church history played an important role at this time, too, as part of a decades-long drive to roll back the influence of the Catholic Church in France. In his examination of the work of Jean-Paul Laurens, Eberle presents a painter who is largely forgotten today but who helped to define the historical painting of his era, enjoying tremendous success, coming to be regarded as “the last great representative of historical painting in France”.

A short chapter in the book is devoted to historical painting in the newly created state of Belgium. Here, as in the “belated nation” of Germany, painting helped with the creation of a national identity that could invoke its own specific heroic past. However, German historical painting seldom reached the heights of the French model, not least due to a dearth of appropriate commissions.

With the emergence first of photography and then of film, historical painting lost its status and its attraction for the public. In his Execution of Maximilian (1869), Édouard Manet had already moved beyond a concern with historical accuracy, while at the same time working partly from photographic sources. With the triumphal advance of cinema—and this is the punchline on which Eberle’s monumental book concludes—historical paintings sometimes served as sources for films on the same subjects. Now the public desire for spectacle was no longer centred on the Paris Salon but on moving images.

Matthias Eberle’s book offers a fascinating and thoroughly researched overview of a genre unjustly sidelined for a century before museums like the Musée d’Orsay recognised its equal importance alongside the Modernism that had hitherto exclusively prevailed.

Bernhard Schulz has been the art critic of Der Tagesspiegel, Berlin, for more than 30 years. Formerly he was a curator of the Berlinische Galerie (Landesmuseum für Moderne Kunst, Fotografie und Architektur)