Potty about pictures: ancient Athenian vases are an important historical resource—but this book fails to deliver 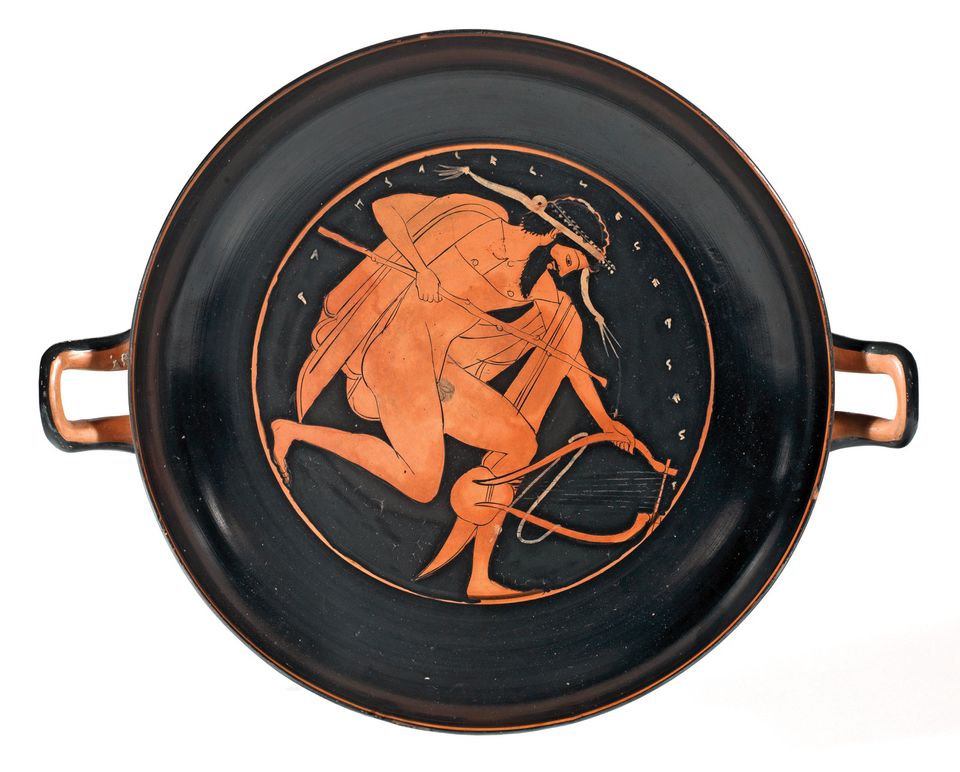 A man with a lyre and a staff (around 500 BC), attributed to the circle of the Nikosthenes Painter The Fitzwilliam Museum, Cambridge

Robin Osborne offers an overview of the subjects depicted on Athenian pottery of the 6th and 5th centuries BC, relating them to the social conditions of their day. It is universally acknowledged that Athenian vase painters from the 7th to 4th centuries BC present us with a comprehensive view not merely of the physical appearance of classical Greeks, but insight into their social, political and religious beliefs and practices. An obvious example is an Athenian tyrant’s decision to enter Athens disguised as Heracles in a chariot beside a figure dressed as the city goddess Athena. Osborne rejects this example, but without explanation.

There are comparable scenes of decisions being reached by heroes democratically, by open voting. Osborne concentrates on the gymnasium, which for Athenians was more than an exercise ground and almost a political club; and on the military, remembering that every citizen was a soldier, representing their tribe and with elected generals, the farewell to home being a particularly poignant scene for any citizen. Courtship is a social activity too readily taken over by figuration of satyrs and their lascivious behaviour with the other and their own sex. The satyrs also provide a model for symposiac behaviour. There is a specific role for the god Dionysus/Bacchus, lord of the satyrs and their female companions, the maenads, whose activity is out-of-doors. The transition from archaic theatricality to classical absorption is well remarked, a general slowing down of pace. It is not so easy to define the new classical attitude to the individual, this being largely a matter of the sculptor’s innovative skills at totally accurate representation of the human form, commonly naked, and almost always male. When not a study of the individual, as for a cult statue or offering, it embraces the individual as part of a group, not necessarily in action, and as seen on the pediments and metopes of temples.

A strong point might well be made about the long absence of portraiture and the totally passive aspect of almost all single-figure studies, and the markedly slow transition to the period of true portraiture and expression of sometimes extreme emotion, otherwise available only through pose and gesture. The role of the gods in everyday life was changing and there is a degree of intimacy in scenes of worship and sacrifice, no doubt abetted by the new architecture of worship developed in Athens, but not considered in detail here.

While the inspiration for the range of scenes discussed is clear enough—the contemporary world—we might also consider the artist’s customer. How many appreciated this range of subject, especially the more nuanced subjects? Why would they look for them on a clay vase, which was not the most expensive everyday item? The Athenian artist (or artiste, though the only female vase-painter shown on a vase might just be filling in black areas) had no idea whether what he was painting was going to be looked at, let alone carefully analysed, by a woman in an Athenian kitchen or a nobleman in an Italian castle.

• John Boardman is the Emeritus Professor of Classical Archaeology, Oxford University, and a Fellow of the British Academy

Appeared in The Art Newspaper, 301 May 2018
More ReviewTopicsAntiquities & ArchaeologyCeramicsGreeceAncient Greece