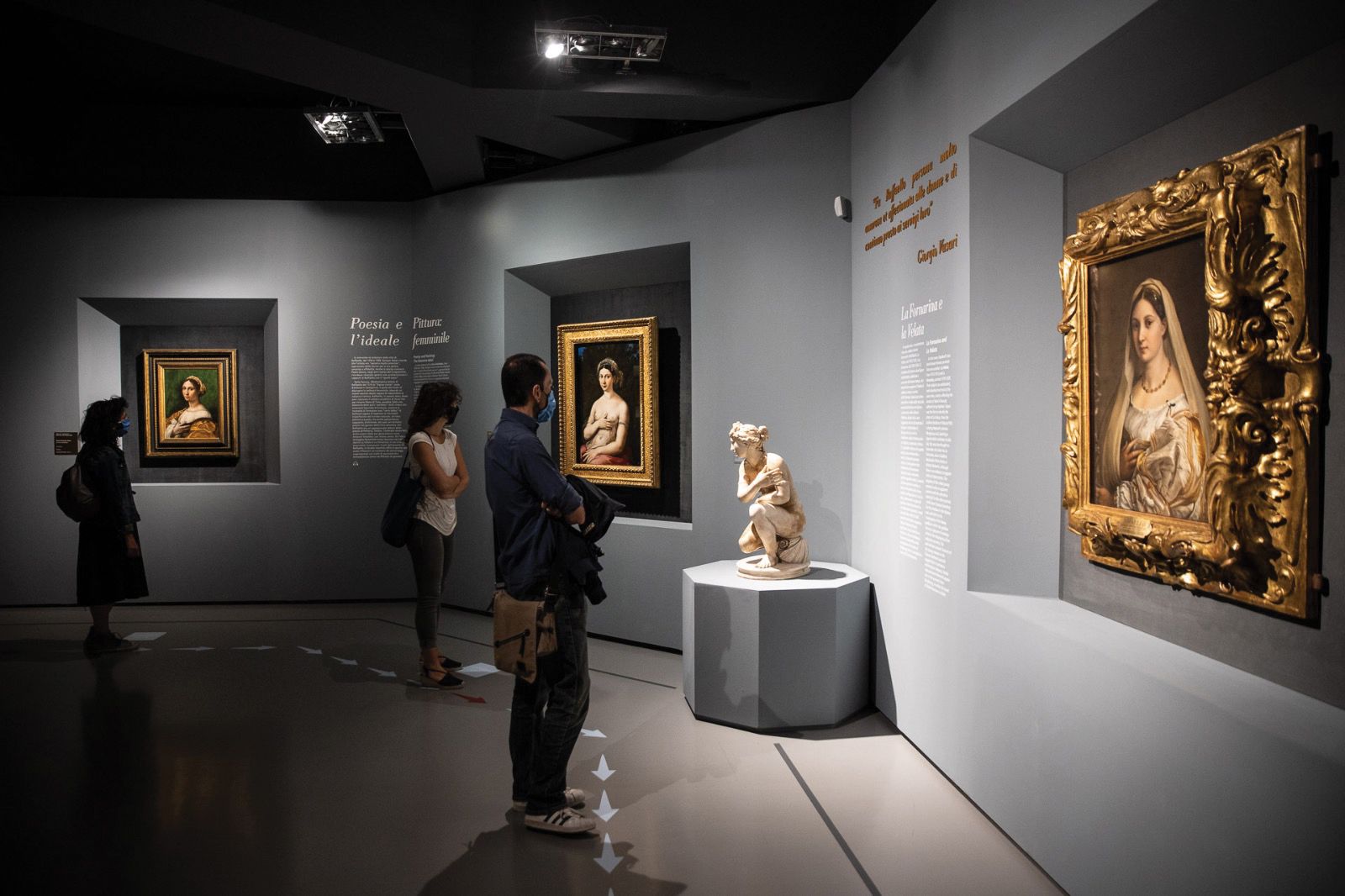 Artists often turn their pictures upside down to check whether they work. The curators of Raphael 1520-1483 at the Scuderie del Quirinale in Rome, the main Italian exhibition celebrating the quincentenary of Raphael’s death, are looking backwards at the artist’s entire career. And there is no doubt: it works.

Nothing has seemed straightforward with this exhibition: only three days after its opening it had to close, as the world shut down for Covid-19. It reopened on the day it had been meant to finish, 2 June. There could have been no worthier tribute to the artist than the unprecedented solidarity of the lenders extending their loans for a second turn, until 30 August.

In the celebrations in 1983 for the 500th anniversary of Raphael’s birth his masterpieces were spread across exhibitions in the regional venues in Italy and international institutions where they are held, so there was no equivalent struggle for loans or concerns about the risks of shipping the artist’s irreplaceable creations. The central exhibition then, hosted by Rome’s Capitoline Museums, focused on Raphael as architect; it changed the perception of the artist completely, but assembled less delicate materials.

“Raphael’s genius will remain beyond all measure”

Thirty-seven years on, in a globalised world, growth is the incentive, even for cultural initiatives. The enterprise behind the present quincentenary exhibition is a joint venture between Arte Lavoro e Servizi (Ales) SpA—the Roman company that runs the Scuderie—and the Uffizi Gallery in Florence. It was their goal to stage the largest Raphael exhibition ever. Their success is demonstrated more plainly in the insurance value for the exhibits—around €4bn—than in counting the number of autograph works by the master in the exhibition, since there is no scholarly consensus on many attributions. The stakes had been high given the recent volume of Raphael exhibitions: at least one extensive show annually, just counting the last ten years, with four in 2012 alone.

Marzia Faietti, the former director of the Uffizi’s print room, and Matteo Lafranconi, the Scuderie’s director, complemented by Sylvia Ferino, the chair of the show’s advisory committee, present Raphael as the universal artist, involving many specialists and authors in the well-produced catalogue. State-of-the-art technology, mostly 3D, is employed to produce evocative facsimiles or videos, which do not conflict aesthetically with the original exhibits, but succinctly explain complex issues to non-specialists. The installation is pleasantly unobtrusive, leading the visitor gently through the ten sections in a dark environment, which enables combining exhibits according to the specific topics, despite varying conservation requirements.

Telling Raphael’s story backwards retraces the career of this still enigmatic artist from his tomb—one of his last creations, reduced slightly in scale here in a convincing facsimile by Factum Arte—down to his early beginnings. His activities—as painter, architect, archaeologist, entrepreneur and much more—are bracketed between his two easel self-portraits: the one of the established personality known as Self-Portrait with his Fencing Master (1518) from the Musée du Louvre welcomes the visitor and the one of the young aspiring genius from the Uffizi concludes the show. The curators’ provocative approach in reversing the artist’s chronology keeps the visitors on their toes, intensifying their dialogue with Raphael directly through his works rather than treading habitual paths of artistic evolution; it is even somewhat congruous with Raphael’s celebrated wit in his creations. But judging by the scepticism to the idea among colleagues in the UK, it seems more commedia all’italiana than the famous British sense of humour.

The approach to attributions or dating pays homage to the great Austrian Raphael scholar Konrad Oberhuber (1935-2007) by adapting his continuously more “permissive connoisseurship”. While this blurs the focus on Raphael’s spontaneous inspirations, it renders effectively the achievements of his huge workshop: the Raphael “brand”. The indistinct display of works by him and his pupils relieves the visitor of unresolved academic disputes and offers instead a vivid perception of Raphael’s environment. Nevertheless, a lot of material is gathered to induce the specialist or astute student to indulge in specific questions, like who was responsible for the designs for the tapestries in the Sistine Chapel or the enchanting Madonna delle Rose (1520). 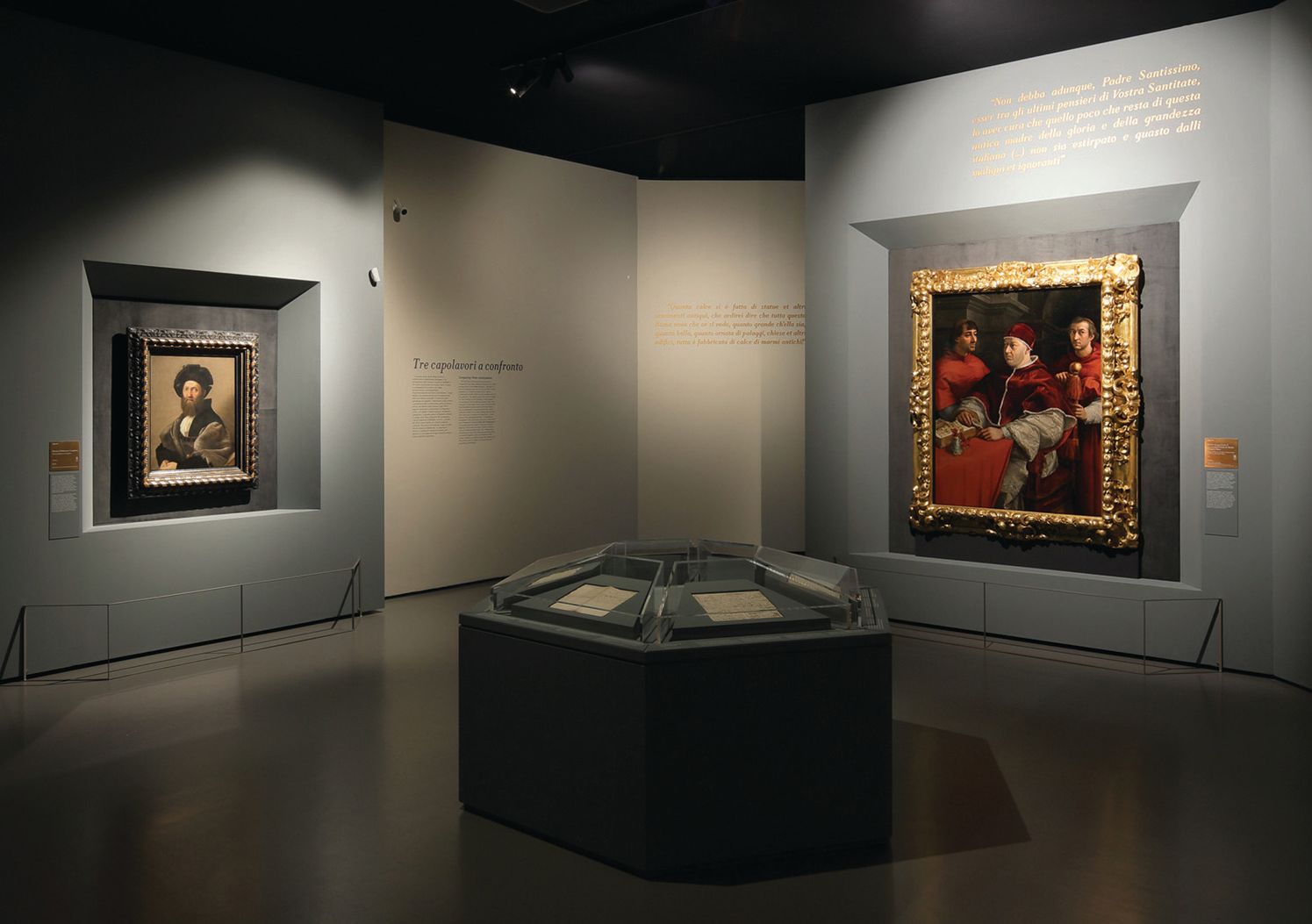 The show’s “most impressive room”, featuring Raphael’s great portraits of Pope Leo X and Baldassare Castiglione, and, in the display case at the centre, a draft of Raphael’s famous letter to the Pope © Alberto Novelli

Raphael’s death was lamented most by his contemporaries for the curtailing of his archaeological activity and his unfinished graphic reconstruction of ancient Rome. Its legacy for the preservation of European culture emerges from a description in a draft letter to Pope Leo X written by Raphael’s friend Baldassare Castiglione, which is displayed in six showcases in the exhibition’s most impressive room. This decisive document is brought to life on the surrounding walls and in the adjoining cabinets by Raphael’s spectacular portrait of Castiglione from the Louvre and of the Pope from the Uffizi, by instruments used to survey antiquities, as described in the letter, and by four related books of drawings after ancient monuments: Francesco di Giorgio Martini’s treatise; the famous Codex Escurialensis; Baldassare Peruzzi’s beautiful notebook; and the drawing book from Fossombrone by Raphael’s workshop. The importance of Vitruvius’s ancient architectural treatise is rendered through the translation which Raphael commissioned from Marco Fabio Calvo and intended to publish with woodcut illustrations.

It is in this area that the exhibition probably makes its greatest scholarly contribution, since Alessandro Viscogliosi, the professor of ancient and medieval architecture at the Sapienza University of Rome, has identified nine topographical surveys by Raphael’s assistant Antonio da Sangallo the Younger. By translating the drawings into a 3D video reconstruction, Viscogliosi provides, for the first time, an idea of what Raphael’s enterprise would have looked like and, in just three minutes, renders visually comprehensible Raphael’s great unrealised achievements.

Technology, provided again by Factum Arte, enables the juxtaposition of a facsimile of Raphael’s cartoon of the Sacrifice at Lystra (around 1515-16) with the respective Vatican tapestry. The educational impact for the general public is indisputable; now scholars have to face the challenge of inserting these new tools into their research and exploiting their potential, before they are once more outwitted by commercial applications. The exhibition implicitly urges collaborations beyond the borders of museums and disciplines. 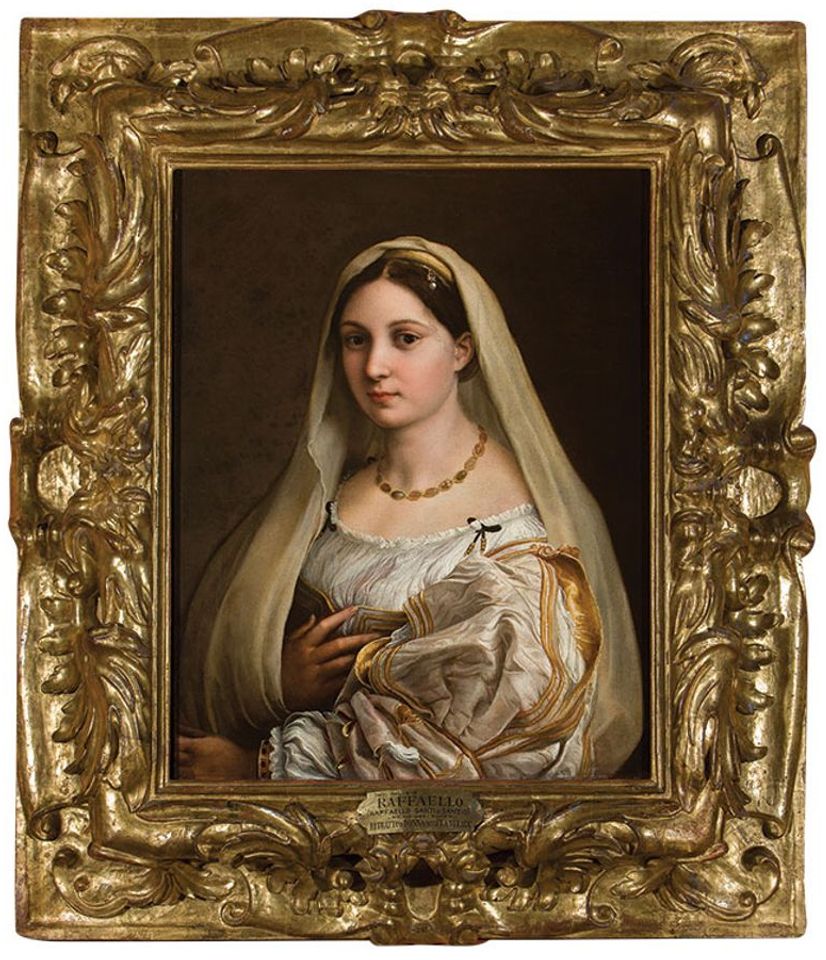 You've been framed: Raphael's La Donna Velata (veiled woman, around 1512-13) from the Uffizi Galleries in Florence

The five sections on the Scuderie’s top floor present the artist with more traditional means, providing less context. The exhibition could have seized the opportunity to present La Donna Velata (around 1512-13) without her overwhelming baroque frame, which the picture has to put up with in its historical setting at Palazzo Pitti. Instead, although the space is generous, she suffers from the assembly with the problematic La Fornarina (1516) and the ugly female portrait from Strasbourg.

Covid-19 has deprived us of an essential ancillary exhibition, serving as an important section devoted to Raphael’s decorative fresco cycle for Agostini Chigi at the banker’s former villa in Rome. Here, the ancient statues from Chigi’s collection, which Raphael used as models, were to have been displayed beneath the frescoes. Besides a few preparatory drawings, a presentation on Raphael’s magnificent papal apartments in the Vatican (the Stanze, Loggie etc.)—which brought Raphael to Rome and kept him engaged through his entire Roman career—was never envisaged as part of the exhibition. However, the National Gallery in London has sent Raphael’s Portrait of Pope Julius II, so that the incredible juxtaposition of both the artist’s papal patrons—Julius II and Leo X (from the Uffizi)—could be achieved.

Raphael’s personality as an artist cannot be understood without his architecture. The fantastic loans try to squeeze the aforementioned show of 1983 into a nutshell by evoking several of his building activities from his later years, like the Villa Madama and the Palazzo Branconio dell’Aquila; the key plans for the new Basilica of St Peter’s are exhibited, regrettably without any of Raphael’s projects.

Raphael is one of Italy’s greatest gifts to the world. By celebrating the quincentenary of his death in such stimulating multi-dimensions, his country has put his distinctive cultural contribution above any economic constraints. What could have been a worthier tribute to the master? The next blockbuster show at the National Gallery in London has been postponed from October to the spring of 2022. As a piece of history cannot be concealed and shifted like a fixed unit—even less so in times like ours—this delay will inevitably open up new dimensions and loans. One thing will stay consistent, however: Raphael’s genius will remain beyond all measure.