Rodin revealed as a daring experimenter in centenary book

More than just bronzes, this collection of essays captures 100 years of scholarship on the 19th century's most famous sculptor

It is through his bronzes, rather than the other media in which he worked, that Rodin’s genius is most widely known and collected. Certainly the most famous sculptor of the 19th century and the first two decades of the 20th, he was also astonishingly prolific. When Rodin died, he left his entire estate to the French nation. Since his death the Musée Rodin has supervised the casting of bronzes in limited editions that include not only some of his greatest achievements, such as The Gates of Hell and the Monument to Balzac, but also numerous works that had not been cast in bronze during his lifetime.

Published on the 100th anniversary of his death, Rodin: Le Livre du Centenaire is a fascinating compilation of essays on a wide variety of topics published under the direction of Catherine Chevillot and Antoinette Le Normand-Romain. It shows how much tastes have changed and knowledge of Rodin’s oeuvre and working practice has grown since 1963 when Albert Elsen wrote a monograph to accompany the Rodin exhibition at the Museum of Modern Art, New York. Elsen did not have access to the incredibly rich archives of the Musée Rodin, in part because he was a brash American, but more importantly because they were still largely unexplored by anybody, French or otherwise. Elsen shared the view commonly held at the time that Rodin’s sculptures in marble were of no interest, admitting grudgingly that “the better marbles… are generally suffused with good taste”, and struggled to make sense of the 6,000 or so drawings that were still mostly unknown. This changed when the inventory of drawings was published in six volumes between 1987 and 1992.

Since the disappearance of the fortress mentality that prevailed in the 1960s, the Musée Rodin has more than compensated through the organisation of numerous exhibitions on individual works and different aspects of Rodin’s oeuvre, including the sculptures in marble, his use of photography and the opening up of the museum to contemporary art. The results are brilliantly displayed in Le Livre du Centenaire.

A foretaste of current critical approaches to Rodin’s oeuvre is given in the group of details of plasters and marbles at the front and back of the book, with not a bronze in sight. It is Rodin the innovator, whose famous works emerged from the multitude of fragments of the human figure and extraordinary assemblages preserved in his studio at Meudon just outside Paris, who is privileged in this Festschrift. While Normand-Romain and Véronique Mattiussi give richly detailed accounts of the development of Rodin’s career in the public sphere—going right up to the present day in the former’s consideration of collections and collectors between 1917 and 2017—other contributors to the book emphasise the experimental side of his practice. 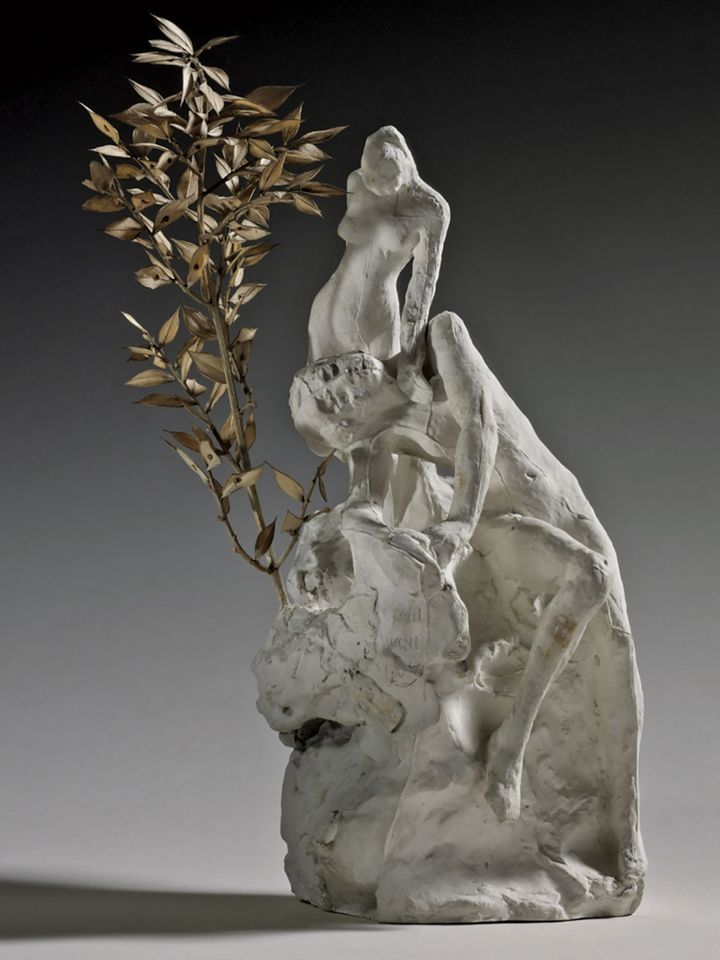 The combinatory Rodin: a plaster assemblage of a female nude from The Eternal Idol (1890-93) and the Female Nude Seated on a Rock, with a Holly Branch (after 1900) Rodin Museum

In a perceptive account, Chevillot goes so far as to say that Rodin’s use of plaster should be considered as “the material most crucial to his aesthetic, giving the impression of sculptures that are never finished, always becoming”. In a discussion of Rodin’s “dessins noirs” that were produced while the artist was working on the Gates of Hell, Sophie Blass-Fabiani notes that his practice as a draughtsman prefigures his practice as a sculptor. Anthony Gormley observes that Rodin’s unorthodox working methods announce Donald Judd and Carl Andre, and their use of multiplication, industrial production and serial repetition.

The Rodin that emerges from this centennial publication is not the exponent of public sculpture and the provider of bronzes for the private collector, some of them only too familiar such as the bronzes of The Kiss cast several sizes and in a very large edition by the Barbédienne foundry, but the sculptor for whom no rules existed. In Old Man Seated in an Urn (1895-1910) Rodin attached with plaster a torso to a terracotta urn, while in Draped Torso of the Age of Bronze (around 1895-96) only the head emerges.

An important constituent of the Le Livre du Centenaire is devoted to the relationship between Rodin and younger artists, beginning with Camille Claudel, Antoine Bourdelle and Jules Desbois in the 1890s who were directly indebted to his sculptural style. Although Rodin fell out of favour for a period after his death, the re-emergence of figurative sculpture after the Second World War and the return to modelling resulted in an approach that found adherents on both sides of the Atlantic, including Germaine Richier, Jean Fautrier and Anthony Caro in Europe, and Willem de Kooning in the US.

In each chapter of the book, selections of works by 20th-century and contemporary artists follow seamlessly from groups of works by Rodin, revealing his ongoing relevance. Typical is a double-page spread of sculptures of walking men by Rodin (1899), Alberto Giacometti (1960) and Thomas Houseago (1995). Another section begins with Rodin’s late drawings and concludes with Anthony Gormley by way of Matisse, Jean Fautrier and Joseph Beuys. At no time do these sequences seem forced.

The peculiar circumstances of Rodin’s posthumous fame, the abundance of casts of the most famous works that appear at auction, the growing number of museums and permanent displays in addition to the Musée Rodin and the Philadelphia Rodin Museum in locations as far-flung as Stanford, Mexico City, Shizuoka and Seoul can result in Rodin fatigue. Le Livre du Centenaire provides an antidote to this condition through its stress on the experimental aspect of his practice and its perceptive juxtapositions of works by Rodin and the many generations of artists who responded to different aspects of his genius from the latter part of the 19th century until today.

• John Tancock was the curator of the Rodin Museum, Philadelphia, from 1967 to 1972. His catalogue of the collection, The Sculpture of Auguste Rodin: the Collection of the Rodin Museum, was published in 1976. He is currently specialising in contemporary Chinese art and divides his time between New York and Beijing