The Big Review: Troy at the British Museum

With an impressive range of objects, this show evokes the eternal power of the greatest stories ever told

When the Greeks spoke of myth they did not imagine a fairy-tale. Muthoi were, rather, “things that were spoken of”, “the transfer of information”—myths could relay both facts and fantasies. The British Museum’s latest blockbuster exhibition—Troy: Myth and Reality—quite rightly does not build a rigid wall between the two, but rather celebrates and interrogates the interplay between Troy, real and imagined, in antiquity and down the ages.

From the moment that Homer’s epic poems the Iliad and the Odyssey were set down 2,700 years ago, describing the war at Troy and its fallout, there is not a single decade in human history when Troy as a story and as an idea leaves the human radar. And so this show is as much about historiography and philosophy as paint on clay and canvas. 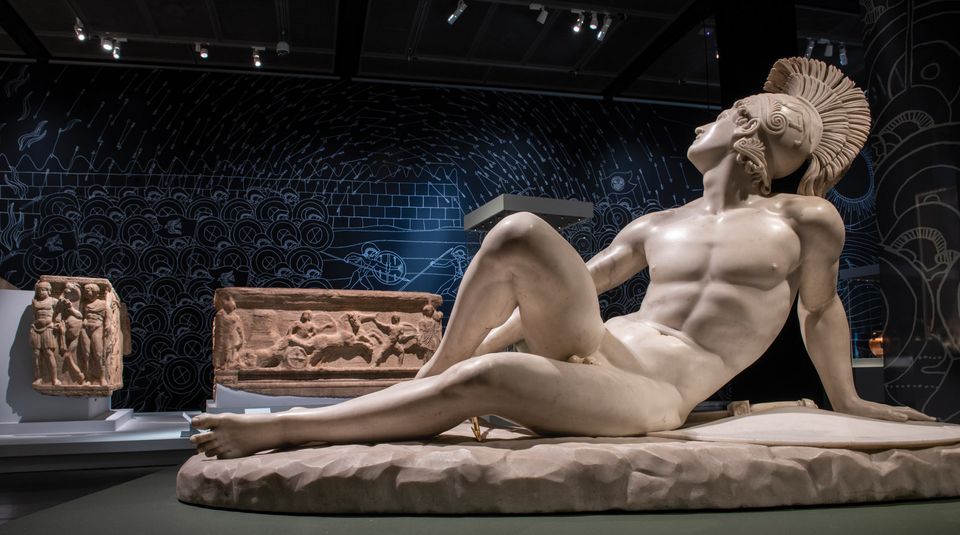 Snaking through the British Museum’s recently opened exhibition space we are reminded, both by its presence and absence, of the extraordinary range of media used to transmit the Troy story across time and space. Gandara stonework from Buddhist stupas in Pakistan show the Greek’s wooden horse being pulled into Troy. Etruscan tombs immortalise the brutal slaughter of Trojan prisoners around the Funerary Pyre of Patroclus, Achilles’s much-mourned lover-companion-comrade. On a Roman sardonyx gemstone, made around Jesus’s lifetime and measuring only 35mm across, is minutely incised the entire tale of the Greek heroes Odysseus and Diomedes attempting to steal the Palladium—the sacred statue of Pallas Athena—from Troy. They murdered a temple guard in the process, so this act of sacrilege—intended to remove the Trojans’ divine taliswoman—spectacularly backfired. This blasphemous outrage is one of the reasons the heroes of Troy were so plagued by tribulation and torment on their long journeys home. It is an exquisite piece: inscribed in the stone we still have the name of the intaglio’s artist—Felix, happy indeed. There are papyri and parchment, too. One senses the curators’ delight in tracking down medieval representations of the story: the richly illuminated manuscripts of Benoît de Sainte-Maure and the first book ever to be printed in the English language: Caxton’s Recuyell of the Historyes of Troye.

The exhibition adroitly selects the very best of the Trojan treasures and tributes that remain: Chatsworth House’s 19th-century wounded Achilles by Albacini; the 1st-century AD bust of Odysseus copied from a Hellenistic bronze; early Bronze Age Trojan pottery excavated by Heinrich Schliemann. But just imagine what we have lost: the silverware, mosaic floors, wall and fresco paintings that crammed the public and private spaces of the ancient and modern worlds, recounting the entire Iliad narrative. 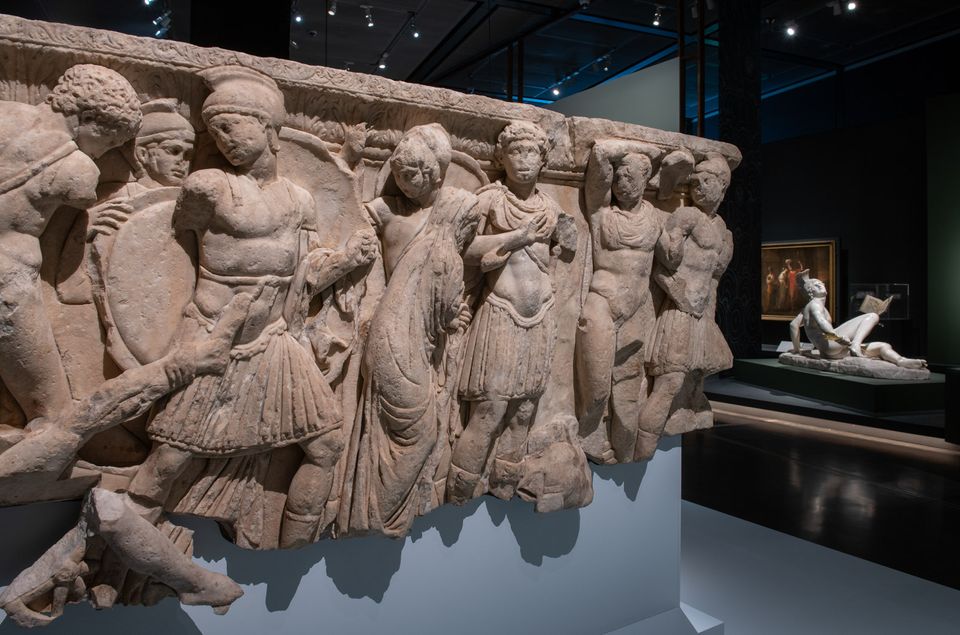 What the exhibition does brilliantly is to explore, subtly, why these have become the greatest stories ever told. Troy tales endure because they meet head-on the role of duty and desire, beauty and brutality in the human experience. They celebrate both our exigencies and our triumphs. The point is also made in the (excellent) exhibition catalogue that Greek epic cycles contain narrative strands, names and places—even precise phrases—that originated in the poetry and prose and storytelling of Bronze Age East and Central Asia. In the narrative of the Iliad we have an epic tale that drew from Eastern examples and was also a legend recounted from the Eastern perspective. It is why civilisations have come and fallen, but this myth-history has never been allowed to die.

Homer was not a historian. But as archaeological digs increasingly uncover items and events described in his poetry—golden spindles, boar tusk helmets, the sloping walls at Troy, Hittite cuneiform tablets—the geopolitics of Priam’s Palace and Agamemnon’s attack edge a little further away from make-believe. Homer (whether we are talking about one man or woman, or generations’ worth of bards; the jury is still out) is both a fabulist and a historian by accident. We now know many of the lines of the Iliad and the Odyssey recall events and experiences stretching back into the late Bronze Age, at least 700 years before the bard lived. 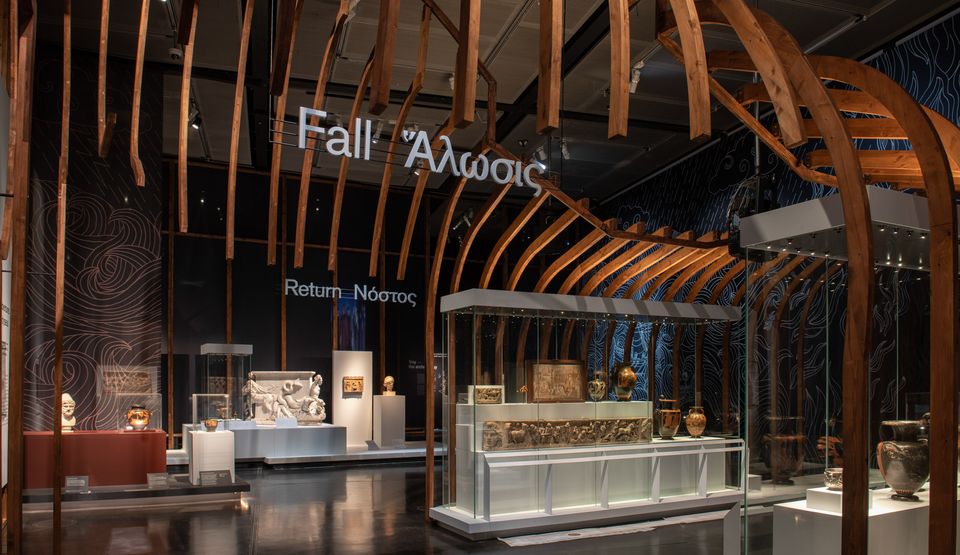 There is inevitably a hard, sexual frisson to much of the work on display. The Trojan war was sparked by Paris’s lust, first for Aphrodite during the Judgement of Paris—masterminded by Eris, the goddess of strife—and then for her prize, Helen, Queen of Sparta and Menelaus’s wife. Eris, with her pointy black boots and black wing—the archetype of every bad fairy of every European fairytale—is there on a delicate kylix-krater of the early fifth century BC. (Enjoy her company because this is a rare representation: artisans didn’t want to invite strife across their thresholds by immortalising Eris on their pots.) The Greeks used the word meignumi to mean penetration, of bodies in both sex and war. Women were human booty: not a by-product of conflict but its purpose. Agamemnon promises treasures and women as a prize, and early Greek tablets from the age of Troy recall households of female slaves, captured from Asia and brought to the Greek mainland.

Yet an insight of the exhibition’s selection is that we see the banality and boredom of battle as well as its pumped-up, abominable pleasures. On one vessel, Achilles and his cousin Ajax (warfare in the Bronze Age was a family affair, the kith and kin of a tribe or citadel or city-state fighting shoulder to shoulder with one another) are intent on the board game they are playing. And there is humour, too: the trials of the returning hero Odysseus were irresistible to the writers of satyr plays in the 5th and 4th centuries BC. Odysseus, portrayed on bronze cheek-plates, wedding chests, lamps with his distinctive travellers’ cap, his pilos, and his wanderer’s beard—head often held in his hands longing for home (while still tempted to sleep with sex-goddesses for years on end)—was the butt of classical jokes as well as an everyman figure who incarnated the triumph of wit and resilience over fate and divine destiny. A man to admire and mock. There is, too, comic-book vase painting, where, for example, on one Black-figure skyphos made in Boetia around 380 BC, the sorceress Circe fixes a pop-eyed Odysseus a drug-laden drink—his pleasurable anticipation of both the brew and his hostess is only too apparent. 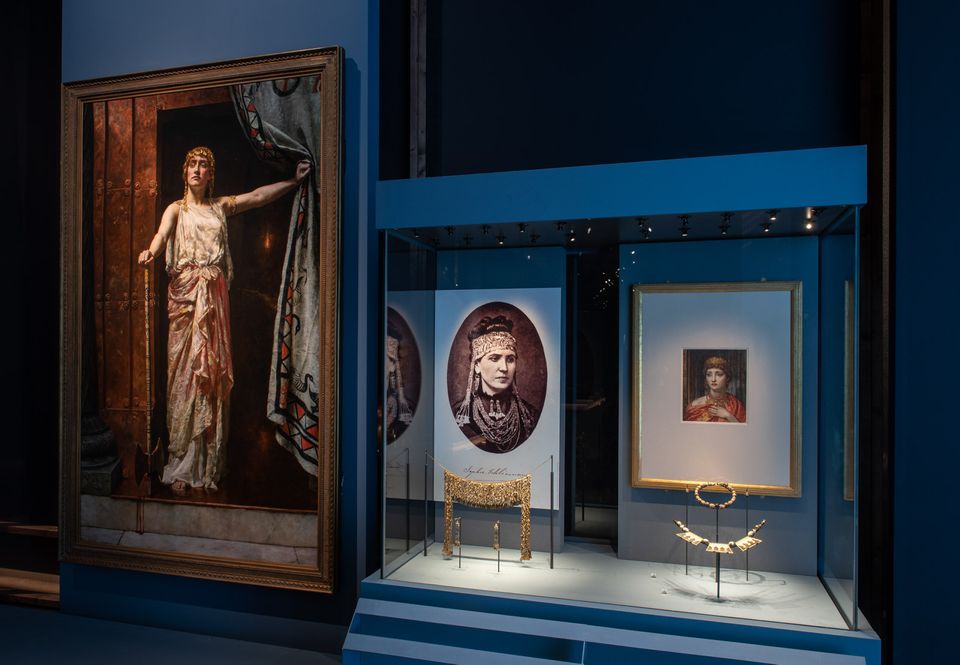 The Troy story is ever more relevant. Myths and histories are both plastic creations—words and images from one world that can be moulded and reshaped to have relevance and bite in another. As the purveyors of knowledge, metaphysical and physical, memory-merchants enjoyed elevated status in the ancient world. One fragment of a wall-painting from the throne room of Bronze Age Pylos in Southern Greece shows a bard, strumming his lyre, sharing tales of the past to inform the present and the future. The thread of history might snap but that of storytelling never does. In many ways, this is a show about memory and what we choose to do with it.

Neuroscientists now tell us that most memory is constructed—that we imagine our pasts to fit a favoured narrative of our own lives. So yes, Greeks and Trojans alike have been used by subsequent powers to justify imperial narratives, xenophobia, conflicts and invasions. But the stories have also invited 100 generations to dig deep and ask central questions about the conflict between rage, wrath and compassion. Physiologically we are creatures of memory. We cannot have a future thought unless we access a memory of some kind. Troy is hard-wired into the collective subconscious of East and West alike. Which is why this exhibition deserves not just one but multiple visits.

• Bettany Hughes is an award-winning historian and broadcaster whose latest book Venus & Aphrodite: A History of the Goddess is out now, published by Weidenfeld and Nicolson