Vibrant illustrations are accompanied by essays that discuss the history, creation and purpose of the textile works 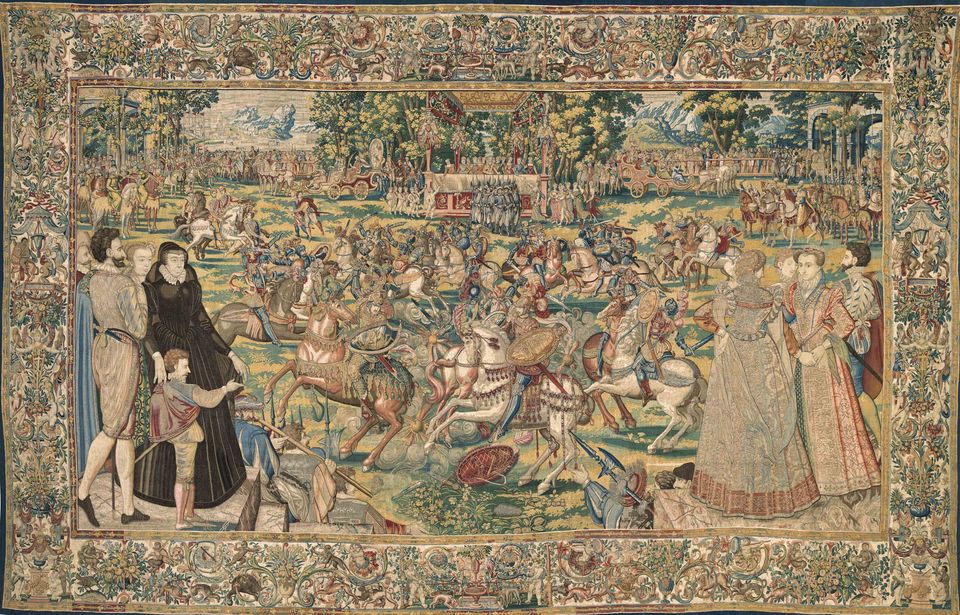 Although this book cannot establish beyond doubt the circumstances in which Catherine de’ Medici, the powerful Queen Dowager of France, widow of Henri II and the mother of three kings of France, commissioned this thematically enigmatic eight-piece set, its provenance is beyond doubt. Shortly after the set was complete, Catherine gave it to her granddaughter, Christine of Lorraine, probably on the occasion of her marriage to Ferdinand, Grand Duke of Tuscany and it has remained in Florence ever since.

Between 2015 and 2018, an intensive cleaning and restoration programme, sponsored by the Friends of the Uffizi and the benefactress Veronica Atkins, was carried out on six of the tapestries (described in detailed by a team of restorers lead by Costanza Perrone Da Zara and Claudia Beyers, who contributed a chapter about their work). The set was, on the whole, in good condition, but the cleaning and repairs have returned much of the brilliance of the colours. The completion of the restorations was the occasion of an exhibition last year at the Cleveland Museum of Art where one of the art-historian authors, Marjorie Wieseman, is a curator; the other, Elizabeth Cleland is a curator at the Metropolitan Museum of Art, New York.

The tapestries were made in Brussels (evident from the original BB mark on the borders, the guarantee of the highest quality and expense), although the weaver or weavers remain unknown. Five of the six drawings by Antoine Caron (1521-99) on which the cartoons were based are reproduced in the book. Cleland reckons it took four weavers working simultaneously at four looms to complete the set in less than a year.

The exact subjects of the series are not clear, although Frances Yates in the first monograph (1959) on the set proposed the titles that have stuck. The tapestries seem to illustrate Valois spectacles or entertainments and diplomatic ceremonies, such as a tournament (Tournament, around 1576), mock battles, music-making and water festivals. Catherine de’ Medici, prominent in her widow’s weeds, appears together with members of the royal family in most scenes. Probably woven after 1575, when the Valois line seemed to have passed its sell-by date, the commission may have been an attempt to preserve the family fame. Clearly she succeeded.