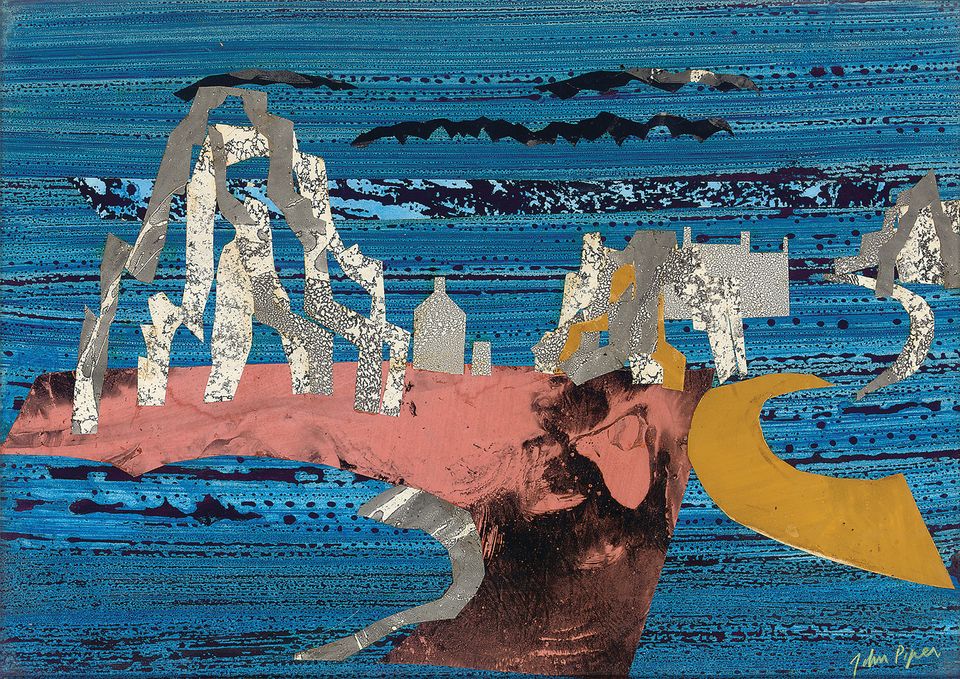 Piper’s unique blend of topography and Romantic Modernism can be seen in the 1961 gouache and collage, Pointe du Château (Image: © Christie's Images)

John Piper (1903-92) is big business these days with his predominantly topographical paintings selling for higher and higher prices. It is thus not surprising that The Art of John Piper, a lavish monograph, is co-published by the Portland Gallery in London’s West End and was launched with a fine exhibition of Piper’s work which included major loans from private collections. His prints are more widely affordable, and their decorative and atmospheric linearity makes them perennially popular. Piper is interesting as a radical Abstract artist who bucked the trend and started painting Neo-Romantic ruins and churches because they captured his imagination. This self-consciously “old-fashioned” subject matter was hugely enlivened by a passionate interest in surface texture and a thorough understanding of the pictorial dynamics of abstraction. In effect, Piper jazzed up the topographical tradition with an inventive use of Modernism, employing collage and photography in his paintings and prints, and directing his substantial design skills to the production of stained glass, ceramics, tapestries and a wide range of applied art.

Piper’s output was so prodigious and so various—I am glancing at a length of fabric he designed as I write this—that no one book has attempted to embrace it all. Frances Spalding published a dazzling double biography of John and his wife Myfanwy in 2009 but, because the emphasis in that book was on their lives, there was little room for sustained analysis of Piper’s art. There have been short books on Piper’s work since John Betjeman wrote his text for Penguin’s Modern Painters series in 1944, and dozens of catalogues on all aspects of his creativity—to date there have been three editions of his print catalogue raisonné—but this new volume is the first book to survey and comment on his whole oeuvre. David Fraser Jenkins has curated numerous exhibitions of Piper’s work, including the 1983 retrospective at the Tate, and written extensively about the artist. He knows the work intimately, and when I was asked to read an early draft of his book in 2013, it was his authoritative understanding which permeated the writing. What was more difficult was making a coherent whole out of a disparate mass of new material and illuminating critical insights. Hugh Fowler-Wright, another Piper scholar of more than 20 years’ experience, joined Fraser Jenkins in this challenging task, and they have clearly worked well together, for the result is a triumph. This is the Piper book that his admirers have been waiting for.

Piper’s grandson Luke contributes a foreword, setting the scene from his grandfather’s cottage at Garn Fawr in Pembrokeshire. Wales was one of the well-springs of Piper’s inspiration, first discovered in the 1930s and constantly refreshing his vision. The Piper family evidently approve of this book, which (in Luke’s words) “faithfully and eloquently reconstructs with great detail, accuracy and knowledge a comprehensive portrait of John Piper”. Luke goes on: “It provides us with the very fabric for understanding the connection between what we see and what we feel in respect to his artistic legacy. It is the missing thread to the sense of place and inspiration to his vision of design…” These are large claims, but they are vigorously substantiated by this compelling text. The book is literally weighty, being best read on a tabletop or lectern, but is handsomely designed and generously illustrated. (The beautiful endpapers reproduce a screen-printed textile Piper designed in 1955 for the Lancashire company David Whitehead, based on a church monument at Exton in the county of Rutland.) Fraser Jenkins locates the heart of Piper’s work in his abiding love for church architecture and for the stone from which these buildings were made. Piper depicted many buildings, interior and exterior, but he also painted rocks in the wild, limestone caves and mountains. This attention to the most enduring of building materials signals Piper’s understanding of the fundamentals of art and civilisation. His own art is built on rock: it will last.

• Andrew Lambirth is a freelance writer, critic and curator. He was the art critic of the Spectator from 2002 to 2014. His most recent book is the catalogue raisonné of paintings by Brian Rice (Sansom & Company)

The Art of John Piper