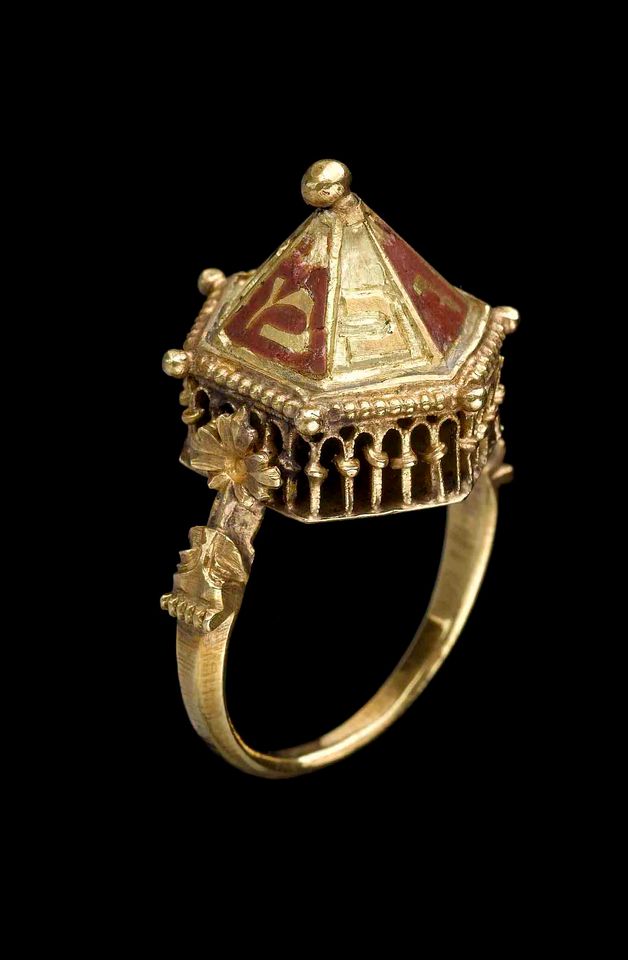 In May 1863, builders carrying out works in a confectioner’s shop in Colmar broke through a wall where they discovered a hoard of medieval objects, mostly coins and jewellery. The owner of the shop sold a few of the items and the rest were handed down in his family until 1923 when his heirs deposited the objects in the Musée de Cluny, Paris. In the 1940s an examination of the hoard, now known as the Colmar Treasure—384 coins, 14 finger rings, an elaborately jewelled brooch, various women’s dress fastenings and other smaller items—established that it dated from the 14th century and was of Jewish origin (from several inscriptions in Hebrew and the absence of any Christian symbolism). A gold wedding ring (shown here) is inscribed “mazel tov” (congratulations) in Hebrew.

This book of essays that accompanies the exhibition at the Metropolitan Museum of Art's Cloisters branch in New York (until 12 January 2020) explores the historical context of this mixed bag. In the 14th century, greater or lesser waves of anti-Semitic persecution alternatively allowed Jews either to acquire wealth and safety or fear for their lives, particularly when blamed for the 1347 outbreak of bubonic plague. It is thought that the treasure might in some way have been amassed against blackmail demands in times of persecution. The Paris museum has loaned 27 items which have been complemented by a few more from the Met’s collection as well as private loans so as to conjure up a picture of 14th-century bourgeois Jewish life in eastern France.