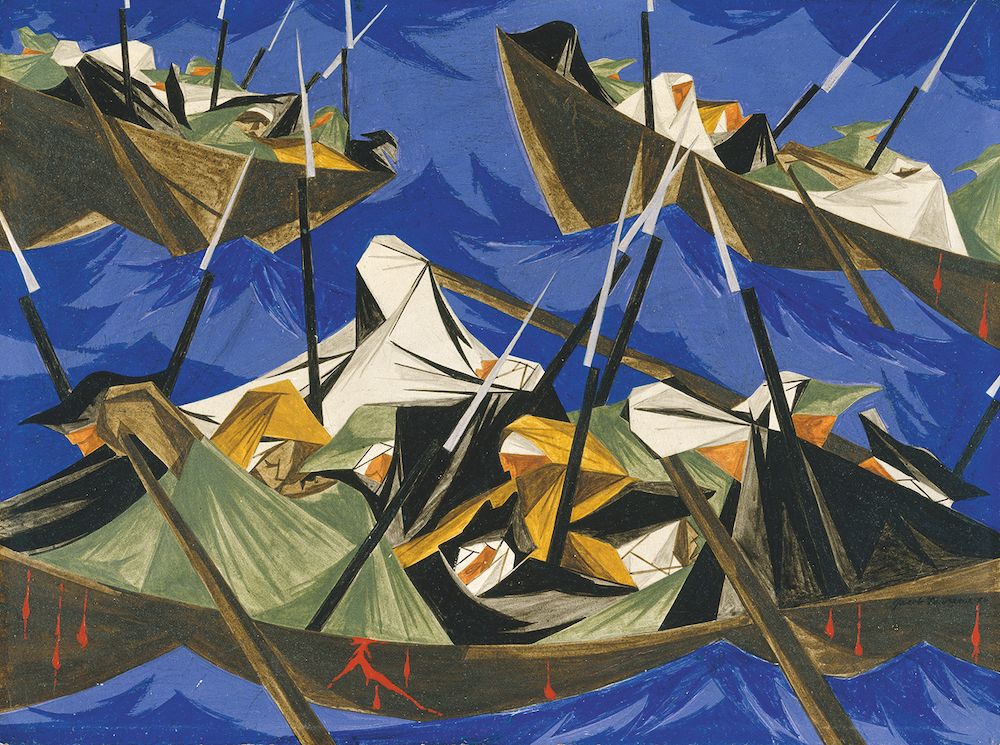 Jacob Lawrence, We crossed the River at McKonkey’s Ferry 9 miles above Trenton . . . the night was excessively severe . . . which the men bore without the least murmur . . . —Tench Tilghman, 27 December 1776 , Panel 10, 1954, from Struggle: From the History of the American People , 1954–56 © The Jacob and Gwendolyn Knight Lawrence Foundation, Seattle/Artists Rights Society (ARS), New York

Jacob Lawrence: the American Struggle at the Metropolitan Museum of Art in New York—one of the headlining exhibitions as the museum reopens after a six month closure due to the coronavirus pandemic—presents the existing panels from the artist’s series Struggle: From the History of the American People (1954-56) which chronicles historical moments in the US, from European colonisation to the First World War. Lawrence described the series of vivid tempera paintings as representing the “struggles of a people to create a nation and their attempt to build a democracy”, and produced the works at the height of the Civil Rights movement, which underscored his focus on America’s legacy of slavery and racial injustice. Against the artist’s wishes, the 30 panels were not kept together after 1959, and five remain lost.

Edmund de Waal: Library of Exile at the British Museum in London features more than 2,000 books from de Waal’s working library honouring the bravery of authors who either fled their homeland or were persecuted within it. Loosely painted in liquid porcelain around the work’s exterior is de Waal’s “ode to lost libraries”, from Antioch and Alexandria. Written up high, a quote from the German poet Heinrich Heine: “Where they burn books, then they will burn people.” Unveiled at the 2019 Venice Biennale and then shown at the Staatliche Kunstammlungen in Dresden, this is the work’s final destination before its contents will be donated to the University of Mosul, which is currently being rebuilt after attacks by Islamic State. As national borders are increasingly fortified, this calm point of contemplation reminds us of the radically transportive and quietly revolutionary power held within books.

The virtual exhibition Gathering Clouds: Photographs from the Nineteenth Century and Today hosted by the George Eastman Museum in Rochester, New York, features more than 100 photographs by 19th-century and contemporary artists who saw the significance of the sky in landscape photography. Beginning with Alfred Stieglitz’s Equivalents (1925-1931)—a series of cloudscapes he called a “tantalising sequence” of experimentation, which were mostly photographed in Lake George and the Adirondack Mountains in New York—the show includes atmospheric and sinuous works from artists who reflected on the abstraction of the cosmos, like Anne Brigman and Peter Emerson. The show, which is also open to view in-person, is available as a 360 tour as well as two audio tours, one featuring statements from the contemporary artists in the exhibition and another dealing with the science behind cloud formations.