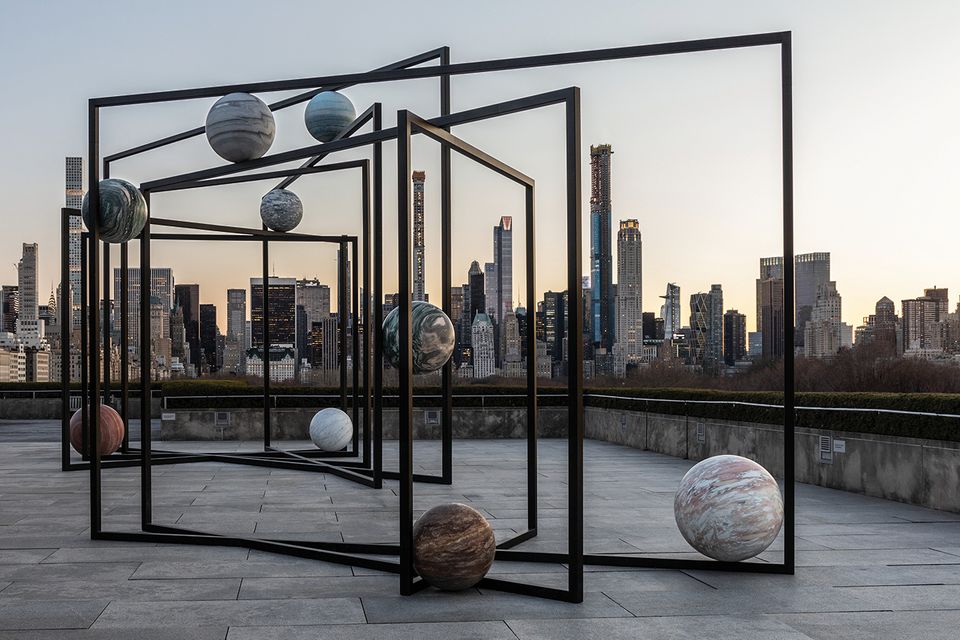 If you were pulled in by the first-ever photograph of a black hole, recently captured by scientists, head to the Metropolitan Museum of Art’s rooftop garden, where Alicja Kwade’s large-scale sculptural project ParaPivot (until 27 October) aims to evoke the “ballet of rotations and evolutions of the solar system”, says the curator Kelly Baum. The Polish-German artist has become well-known for her sculptural works which have scientific and psychological themes, and recently showed the installation TunnelTeller (2018) on the Crane Estate in Ipswich, Massachusetts—a maze-like work that she has said “invites observers to shift their points of view”. The interlocking steel rectangles of the new Met commission, which support stone spheres representing the planets, complement rather than block the city skyline views, framing and echoing the forms of the surrounding buildings.

By turns haunting and claustrophobic, The Self-Portrait, From Schiele to Beckmann (until 24 June) at Neue Galerie makes the case that 1900 to 1945 was a pinnacle for European portraiture second only to the Renaissance. Featuring around 70 works made by 30 artists in Germany and Austria, the show evokes the upheaval of the First World War, the struggles of the Weimar Republic and the rise of National Socialism, as well as an evolving determination to depict people as they psychically are rather than idealise them. Ranging from the jutting facial planes of Lyonel Feininger’s 1915 Self Portrait to Egon Schiele’s raw rendering of his face and body in Seated Male Nude (Self-Portrait) from 1917, the images offer insights into the nature of the artist as creator and, quite often, the pain inherent in the human condition. Don’t miss Felix Nussbaum’s Self Portrait in the Camp from 1940 and Self-Portrait With Jewish Identity Card from 1943, which convey a stark sense of the world closing in on him.

This is the last weekend to see Joe Minter, Sculpture 1995-2012 (until 28 April) at James Fuentes Gallery, a solo exhibition of works by the self-taught African American artist from Alabama, who re-purposes discarded objects and materials, “just as we as a people have been discarded made invisible”, he said in an interview with William Arnett, the founder of Souls Grown Deep. According to Minter, “A spirit of all the people that has touched and felt that material has stayed in the material”, and looking at his large sculptures, there is indeed a visceral, emotional charge and weight of history radiating from the objects. Buffalo Soldiers (1999) is among the most evocative—and visually stunning—works, crosses swathed in barbed wire, with helmets affixed to the three largest and a pair of rifles. And there is a sort of commanding majesty in The Queen (2012), which uses metal chains for long hair, burner grates for eyes and a horseshoe for a mouth.