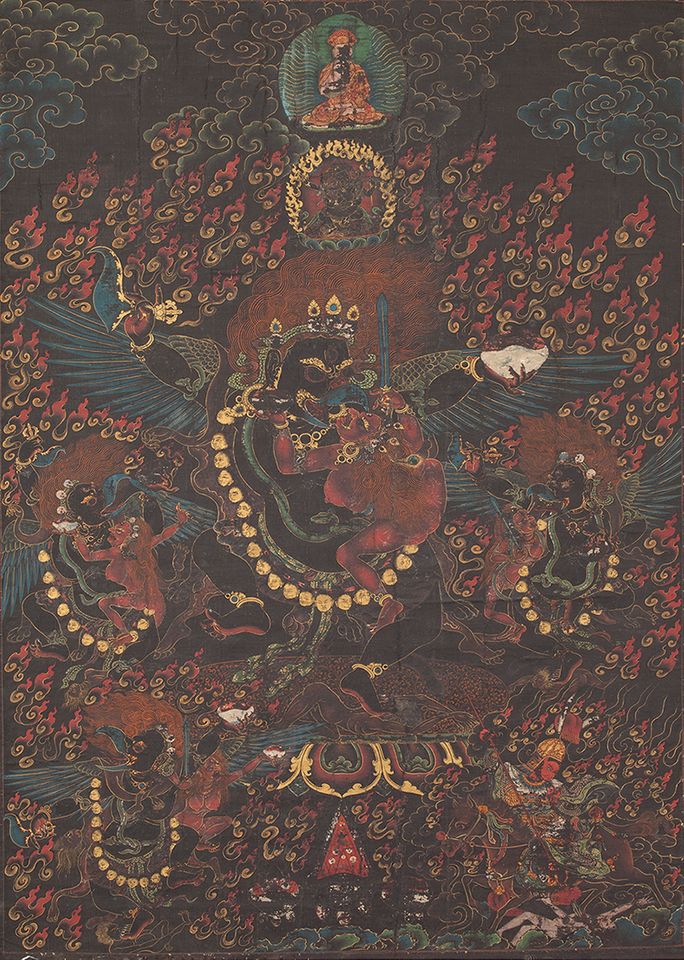 You might not associate Buddhism with the battlefield. But the exhibition Faith and Empire: Art and Politics in Tibetan Buddhism (until 15 July) at the Rubin Museum of Art shows how rulers in Asia from the 7th to 20th centuries used Tibetan Buddhism to assert their power. This chronological journey through around 60 exquisite objects including paintings on silk, embroideries, statues and precious metal objects, tells stories of the rituals that rulers used to crush their enemies in battle. It also shows how Manchu Qing Dynasty emperors portrayed themselves as emanations of the Bodhisattva of Wisdom—a “path to legitimacy through spiritual rather than ancestral kinship”, the art historian Wen-Shing Chou writes in her catalogue entry. Pigment paintings on cloth feature self-assured leaders or feverish, dazzling displays of violence and triumph, like a 19th-century work from Bhutan of the Raven-Headed Mahakala trampling on the enemy, while the craftsmanship of pieces like a 13th-century wrathful icon—dotted with seed pearls—is stunning. The museum had to remove its doors to crate in an impressive 380lb, 15th-century gilt-bronze bodhisattva from the Ming Court.

See Rockefeller Center in a new light with Frieze Sculpture (until 28 June), presented by Frieze Art Fair, which scatters works by 14 Modern and contemporary artists like Kiki Smith and Joan Miró throughout indoor and outdoor spaces of the Art Deco mecca. You can go on a scavenger hunt to find the works and connect them to the site’s history. For instance, Goshka Macuga’s sculptural heads of the Soviet cosmonaut Yuri Gagarin and the astrophysicist Stephen Hawking, placed in front of Dean Cromwell’s monumental 1946 mural The Story of Transportation in the lobby of 10 Rockefeller Center, play with ideas of time, while Hank Willis Thomas’s comic book speech bubble-shaped works reference the complex’s importance for journalism. Rochelle Goldberg’s semi-abstracted animal and anthropomorphic sculptures “are like a menagerie of a post-apocalyptic Noah’s Ark”, says the project’s curator, the Noguchi museum director Brett Littman, and they seem both creepy and playful. The most striking work, by Ibrahim Mahama, replaces the flags of the 192 UN member countries hung around the skating rink with 50 flags made of used cocoa bean bags.

A stormy soundscape greets you when you enter Theresa Chromati’s solo show, Running in Place and Sometimes Walking: At Times I Feel Loved and Paralyzed (until 22 June), at Kravets/Wehby Gallery. Made in collaboration with the producer Pagelica, the sounds—words from the artist’s mother, high-pitched vocals, creaking, and thunder—bring you along on a journey with Chromati and the twisted and elongated nude women she portrays in her colourful acrylic paintings. There are multiple figures in each painting but each portrays just one woman: “maybe this was her in the past, or her in the future”, Chromati says. These are situated within distorted archways and checkerboard tiles that emphasise the journey of her life: “You know, you’re on this path, but you don’t necessarily know where it’s going. But you trust that no matter what you’re still moving,” she says. Chromati points to the work’s layering, like the thickly-applied glitter and soft fabric sculptures affixed to the canvas. “I just want to create a dialogue that you can be all of these things and, feel all of these different ways,” she says. “You can enter it and have many different conversations with each piece, like pain and comedy and lust and desire and fragility—all these things are me.”