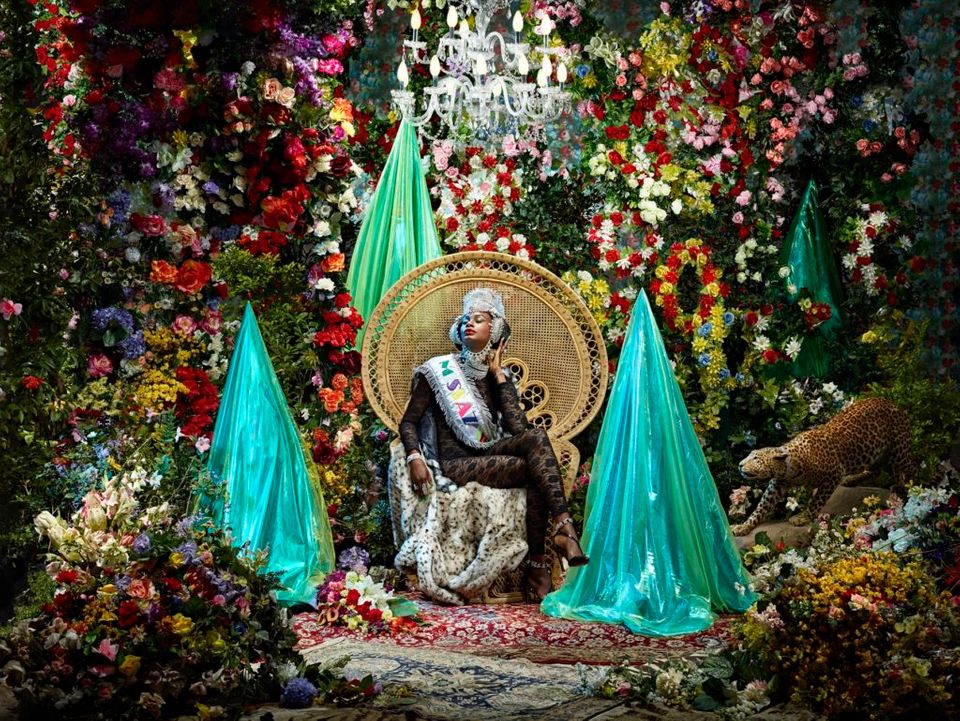 Athi-Patra Ruga, Umesiyakazi in Waiting (2015) Image courtesy of the artist and WHATIFTHEWORLD.

The sixth edition of the Cooper Hewitt Design Triennial, Nature (until 20 January 2020), explores the human relationship with the natural world, focusing particularly on environmental crises and the extinction of animal and plant species, with more than 60 projects by international teams of artists, designers, scientists, engineers, environmentalists and others. A sensory delight but a sad reminder of what we have lost, the “scent installation” Resurrecting the Sublime (2018-19) by Christina Agapakis, Alexandra Daisy Ginsberg and Sissel Tolaas releases the smell of extinct flowers, based on DNA sequences from historic samples of lost flora. In The Substitute (2019), a video installation by Alexandra Daisy Ginsberg and The Mill, watch the last male northern white rhino, who died last year, develop from a series of pixels to a lifelike animal using AI-generated data. The actor Luke Perry was laid to rest this year in an edition of another work on view: Jae Rhim Lee’s burial suit, made of a “biomix” that aids decomposition, through which the dead are turned into mushrooms, to avoid the toxic chemicals released by conventional burial options or cremation.

The New York Botanical Garden’s summer exhibition, Brazilian Modern: the Living Art of Roberto Burle Marx, offers a peek into the lush world of the celebrated artist, conservationist and landscape architect, whose estate in Rio de Janeiro is being considered for Unesco World Heritage status this year for its vast botanical collection and record of the artist’s oeuvre. The indoor gallery portion of the show brings together a snapshot of paintings, drawings, textiles, architectural designs and sculptures by the late artist. But visitors will find the strongest part of the exhibition peppered around the garden and in the Enid A. Haupt Conservatory, where more than 3,000 species of Brazilian flora—including some represented at his estate—dramatically colour the space. Another highlight is the water garden, which is filled from a waterfall flowing from one of the artist’s sculptures and contains lush tropical lilies.

The recently opened Ford Foundation Gallery has morphed into “a space of visual lushness and opulence, one that envelopes the viewer in a sense of love, protection, power, and unity”, according to its director Lisa Kim, in the exhibition Radical Love (until 17 August). There is a palpable magnetism to the works by artists such as Faith Ringgold, Omar Victor Diop, Baseera Kahn and Ebony G. Patterson, which revere subjects who have often been “othered”, including people of colour, queer people or those with disabilities. The variety and richness of the materials range from the sequins and metal bells on the mannequins by Raul de Nieves, hunched like figures in a Nativity crèche and staged here in dialogue on a mirrored base (2019); to the 24-karat gold in Lina Iris Viktor’s imposing work on canvas, Eleventh (2018); to the delirious assemblage of various everyday objects in Thomas Lanigan-Schmidt’s altar-like work referencing racism, displacement and gentrification (1985). Though quieter in terms of material, among the most poignant works is Sue Austin’s 2012 video Creating the Spectacle!' - Part 1 - Finding Freedom, in which the subject glides through the underwater world in a self-propelled wheelchair—a gorgeous feeling of lightness, wonder and discovery, freed from any limits of the body.