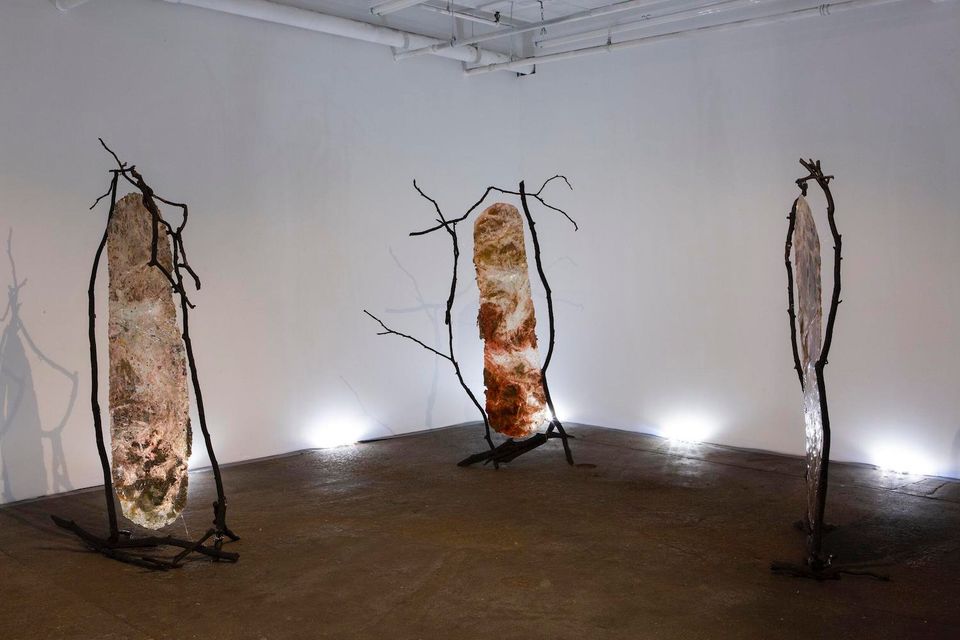 It might feel like we have all stepped through a portal into another dimension since the pandemic swept the world, which makes Vanessa Thill’s latest Portals series, at Deli Gallery in Brooklyn (until 2 August), a fitting return to viewing work in-situ again. Along with two drawings and a textile work, there are six of these sculptures within the exhibition—the artist’s first with the gallery and the gallery’s first to open to the public since lockdown. Each free-standing object is fitted with rough-hewn resin and enamel panels supported by a frame of torched twigs, at attention like unreflecting full-length mirrors. The panels are fleshy in colour, abstractly swirled with fake blood, sand, hair, wine, shells, soap and mica, tethered to their twiggy exoskeletons with thin, taut wire. They are like a body inverted, or a body exposed; at the very least a reminder of how vulnerable a body can be. The gallery, dimly lit and perfumed with the heady scent of balsam (for which the exhibition is named), feels a bit like a vigil but also womblike in its encompassing glow. It’s an excellent reminder that, though we are all in mourning over the loss of what we knew, we are all in the process of becoming new again, in forms that are not yet quite complete.

Art aficionados nervous about venturing back into the real world post lockdown should head for Thomas Dane Gallery in London, which has reopened its exhibition dedicated to Ella Kruglyanskaya (called This is a Robbery, until 24 July). The Latvian-born, Los Angeles-based artist’s jaunty expressive, figurative works—showing feisty women in a variety of poses and situations—are an antidote to the turbulent news cycle of the 21st century. Kruglyanskaya’s cartoon-ish images draw upon a myriad of sources, from 1950s fashion illustrations to German Expressionism, creating an exuberant narrative based on the dialogues and friendships shared mainly by women. Detailed, hyper-real still lifes also stand out, such as The Arrangement (2019), which shows a pot brimming with carrots perched against a half-rolled painting; an array of unfamiliar items such as some bizarre cut-out shapes and a piece of rotting fruit complete the composition. The effect is a contemporary memento mori that looks to Magritte but is resolutely of the moment.

The New Museum is hosting an online viewing of Neil Beloufa’s video Screen Time (2014), a retro-style video game where players move between episodes of a low-fi mini-series about a global pandemic caused by a respiratory disease. Doctors, professors, lovers and family members engage in several confused video conference calls as they remain separated by quarantine. The videos were shot with regular people rather than trained actors, giving it a glitchy feel, like a cheesy soap opera in which the characters speak their thoughts aloud, which adds to the old-school game play. It opens with news that “a pandemic is wreaking pandemonium worldwide as pharmaceutical companies scramble to patent a cure,” and that players need to “get to the truth and win an art edition”. Between episodes, players must answer what seem like arbitrary questions—how do you spell Arnold Schwarzenegger’s surname?—and solve puzzles. At one point, a character announces that “superstition, ignorance plus fear all contribute to the spread of the disease”. The parallels of this fictional work with today’s world are a little disconcerting to say the least.

about 9 hours ago
'It is like spring in the art world': A more civilised, 'humane' Frieze New York bodes well for the market